The Bank of England has upgraded its growth forecast for the coronavirus-hit UK economy and signalled it will not raise interest rates in the near term – despite seeing a looming spike in inflation ahead.

The latest meeting of the central bank’s interest rate-setting committee left policy unchanged, with rates remaining at their COVID-19 crisis low of 0.1% as analysts had widely expected.

But its quarterly Monetary Policy Report said that the vaccine-led recovery from the sharpest hit to the economy in over 300 years in 2020 was clearly under way at a greater speed than initially expected. 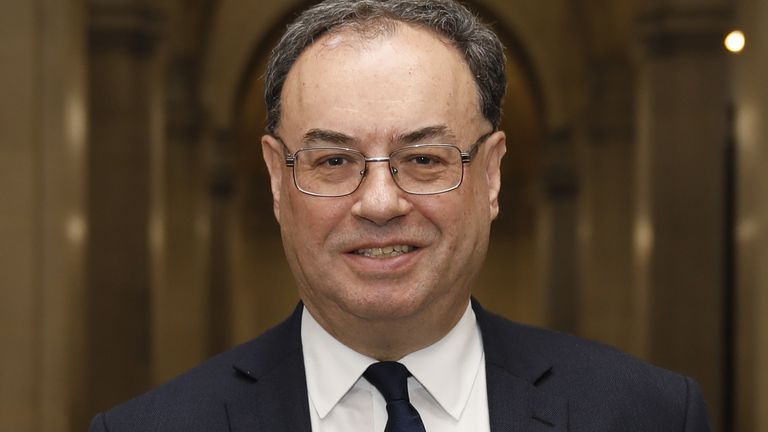 The Bank said it now saw growth of 7.25% during 2021 – up from the 5% it expected earlier this year – with output falling by just 1.5% in the lockdown-hit first quarter compared to the plunge of over 4% feared in February.

Sky’s economics editor Ed Conway said: “It is a question of bouncing back to where we were before the recession.

“The Bank says that it thinks we’re going to get to that point… by the end of this year. That’s a little bit better than expected – they had been talking about sometime next year.”

The report said: “GDP (gross domestic product) is expected to rise sharply in 2021 second quarter, although activity in that quarter is likely to remain on average around 5% below its level in the fourth quarter of 2019.

“GDP is expected to recover strongly to pre-COVID levels over the remainder of this year in the absence of most restrictions on domestic economic activity.”

But it warned of potential “downside risks” to its outlook from new coronavirus variants.

The Bank’s predictions for an acceleration in growth were backed up by a closely-watched survey of firms, released earlier on Thursday, which pointed to the largest leap in business activity since 2013 in April for the services sector.

The IHS Markit/CIPS Purchasing Managers’ Index (PMI) recorded a reading of 61 – up from 56.3 in March – with any reading above 50 indicating growth.

It noted “sharp increases” in both business and consumer spending as coronavirus restrictions continued to ease.

The latest series of PMI reports have also highlighted spikes in prices for companies through higher transport and raw material costs.

The services PMI reported the steepest rise in costs for businesses in over four years and widespread evidence those are being passed on down the supply chain.

In its report, the Bank said it expected the Consumer Prices Index (CPI) measure of inflation to shoot up beyond its 2% target by the end of the year from it’s current level of 0.7%.

It highlighted a surge in energy prices as a primary cause but said that it was not unduly concerned about the outlook, with CPI tipped to fall back to target quickly, and suggested rates would remain at current levels in support of the recovery.

It is a striking number, a historic one. The strongest economic growth since 1941.

The Bank’s decision to upgrade its growth forecast for this year from 5% to 7.25% is not exactly a surprise.

Everyone was expecting a big number, and indeed up until the third lockdown over the opening months of 2020 that number was precisely what the Bank was expecting in gross domestic product growth this year.

These aren’t the only provisos. Of course, this is less a boom than a rebound following the extraordinary 9.75% fall in 2020. We still won’t get back to where the economy was pre-Covid until the end of this year.

But even so. This is a growth rate that hasn’t been experienced in this country in nearly a lifetime.

And the Bank believes that thanks to the lockdown easing slightly sooner than it expected and the success of the vaccination programme, that moment where we regain our pre-Covid level of national income will come some months sooner than previously anticipated.

Perhaps the best comparison for this year of growth is the 7-8% rate in 1927.

That year the economy was also bouncing back from an enforced economic shutdown – though in that case the shutdown was not a pandemic but the 1926 General Strike. The question now is whether what follows feels like the “roaring ’20s” or something else entirely.