Like Porsche, Lamborghini and Aston Martin before it — and every workaday carmaker following the crowds — Ferrari is getting into the S.U.V. business.

Ferrari’s Purosangue, for “thoroughbred” in Italian, isn’t expected until 2022. But sports-car traditionalists are already grinding teeth like the gears in their manual transmissions.

The gripe seems to be that Ferrari, from its perch atop autodom, needn’t stoop to conquer the S.U.V. market, to chase consumer whims from America to China. This is the company whose sports cars are so exclusive — built of “unobtanium,” in popular parlance — that they often appreciate in value the minute an owner peels out of the dealership lot. That is, once a prospective owner has been vetted by Ferrari or its dealers and granted permission to buy one. That process can seem as byzantine and mysterious as an audience with another Italian icon, whose address is Vatican City rather than Maranello.

A classic Ferrari is worth its weight in Tesla stock, and the fabled 250 GTO has become the most valuable car in history: A 1963 GTO, one of 39 ever built, was reportedly purchased for more than $70 million in 2018. The same year, a 1962 GTO set the record for public sale, fetching $48.4 million at auction.

Ferrari’s cars are classics for a reason. But staying relevant will mean some changes, and while it’s not going mainstream by any stretch of the imagination (or wallet), Ferrari’s evolving lineup suggests it is willing to adapt to the times.

For decades, Ferrari has lived by the originalist view of Enzo Ferrari, its near-mythical founder. Company executives and aficionados still bandy the question “What would Enzo do?” as though it were 1947, when Mr. Ferrari began producing road-going cars as a sideline to fund his beloved “Scuderia” racing team. His oft-quoted credo was to build one car fewer than the company could sell. Another? To never, ever produce a four-door car. (An S.U.V. would have been unthinkable.)

Between bidding wars on classic models and sharp-elbowed maneuvering for new ones, one might expect Ferrari to jealously guard its velvet rope, rather than relax it. Enrico Galliera, Ferrari’s chief marketing and commercial officer, said the company’s “excessive” waiting lists, and the increasingly extreme character of its sports cars, called for a broader model range and a more inclusive approach. 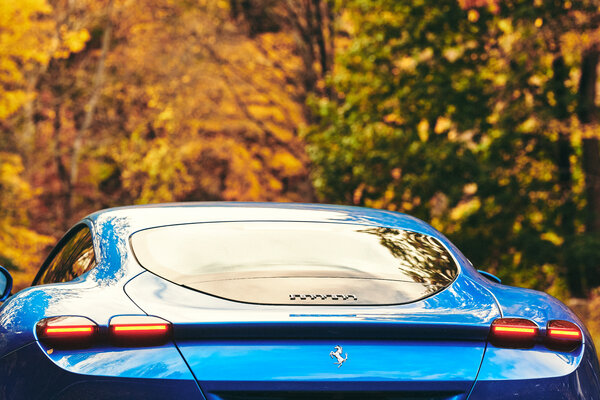 “Frankly speaking, we are not for keeping the Ferrari family small,” Mr. Galliera said. Ideally, “more people will enjoy the emotion of Ferrari, not just the driving but to be part of something special.”

He added, “Our exclusivity won’t be jeopardized because we have new members of the family.”

Consider the Ferrari Roma a flirty letter to those prospective buyers — perhaps wrapped in a “Blu Corsa” bow, like the model I recently drove in upstate New York. If I squinted, the cliff-hung curves overlooking the Hudson River, including Storm King Highway near West Point, might have been the Italian Riviera, considering the Roma’s alluring lines and 612-horsepower performance.

For 70 percent of owners, Mr. Galliera estimates, the Roma will be their first Ferrari. That’s not merely because, at $222,620 to start, the Roma is easily the most affordable Ferrari coupe. The Roma is also a two-plus-two GT with surprising weekend luggage space, a livable ride — including an adjustable magnetic suspension — and a less swaggering demeanor than models like the new, $276,000 F8 Tributo.

“We were looking for something with a little more understated elegance,” Mr. Galliera said of the Roma. “It’s an F1 car in evening dress.”

Yet the Roma is not built solely for red-carpet entrances: The blue bullet I drove can launch to 60 miles an hour in 3.4 seconds, and nip 200 m.p.h.

The Roma’s romantic curves do offer whispers of great Ferraris past, such as the 250 GT Berlinetta Lusso. But the Roma is no exercise in retro nostalgia, often thumbing its pretty nose at company traditions. Below the stretched hood thrums a twin-turbocharged V-8, not a naturally aspirated V-12, whose high-revving howl was once inseparable from the company myth. That includes Ferrari’s first road car, the 125 S of 1947, whose near-miniature, 1.5-liter V-12 had critics dismissing Enzo Ferrari as “a nut case” but quickly proved its worth in racing.

The Roma further adopts a brake-by-wire system and digital displays, designed to minimize distractions and keep a driver’s hands on the steering wheel. Readouts include a striking digital tachometer that animates the blazing yellow background and sweeping marker needle — complete with digitized shadows — of Ferrari’s classic analog tach.

Another new model, the SF90 Stradale, moves the tech needle to address challenges faced by every sports-car maker. The Stradale, Ferrari’s first plug-in hybrid, is a successor to the $1.4 million LaFerrari hybrid, of which only 500 were built, and a relative deal at $511,250.

The fastest road-going car in Ferrari history, the Stradale is designed to ease carbon-dioxide emissions and the driver’s anxieties alike. Three electric motors serve as wingman to a gasoline V-8, with a combined 986 horsepower. In tandem with Formula 1-derived stability systems, the SF90’s motors boost handling with sensor-controlled bursts of power or braking at all four wheels.

“The customer wants to have that control. Otherwise, they’d get scared to use a car with nearly 1,000 horsepower,” said Michael Leiters, Ferrari’s chief technology officer.

Even more rarefied is the new Icona series, which updates company classics in limited-run form. Those include a fanciful $1.73 million Monza SP1 with a single seat for a driver and no windshield, in the romantic style known as barchetta, Italian for “little boat.”

“These are the products that we consider a reward to our best clients,” Mr. Galliera said. “It’s our way of saying thank you to the people who are most connected to our brand.”

Those connections, he underlines, aren’t about who has the most money and clout — after all, wealth is a given among prospective buyers — or who owns the most Ferraris, though previous ownership is a top test as the selection funnel narrows for new models. Dealers are known to advise first-timers to buy a pre-owned Ferrari first, then come back and talk, because their new-car list is already filled with repeat customers.

When A-listers with impeccable credentials vie for the rarest models, Mr. Galliera said, true fanatics for the “Ferrari lifestyle” rise to the top: customers who race in the Ferrari Challenge owners’ series, perhaps, or are active in company charities.

For Ferrari and automakers that try (but mostly fail) to emulate its approach, that prospect of unattainability — real or illusion — helps pour gasoline on red-hot demand. Tesla and other electric vehicle makers have taken a cue with “reservation” systems and waiting lists of their own. At these fantastical prices, limited supply remains crucial. Ferrari sold a record 10,131 cars in 2019, up 9.5 percent from the year before but still a drop in a global ocean of about 77 million new-car sales that year.

Despite that, Ferrari is proceeding with the Purosangue, an S.U.V. that, on paper, may be its most versatile, mass-appeal model yet. (Unmollified critics prefer adjectives like “pandering” or “overscaled.”) The company’s challenges include replacing Louis Camilleri, who abruptly stepped down as chief executive in December after a bout with the coronavirus. Mr. Camilleri had replaced Sergio Marchionne, the high-profile architect of the Fiat Chrysler turnaround, who died in 2018 after surgical complications.

Ferrari is also foundering in Formula 1 racing, the wellspring of its global image, after a sixth-place finish in 2020 for its worst showing in 40 years.

For all that, Mr. Galliera calls the Purosangue’s introduction among the greatest challenges in company history. It was born from Ferrari’s determination “to be a little bit unpredictable.”

Whatever the Purosangue’s reception, Mr. Galliera said, the model will be distinct from any competitor, including Lamborghini’s hot-selling Urus.

“It would be a pity if a Ferrari arrived with just a copy-and-paste of something already in the market,” he said. “It has to be different.”

Answering skeptical reactions to a Ferrari S.U.V., Mr. Galliera is unconvinced that Enzo would be spinning in his grave, most likely at 9,000 r.p.m.

“He was first who was striving to anticipate and beat client expectations, always trying to surprise them,” he said. “I tend to believe that, looking at the Purosangue’s execution, we would have seen a smile on his face.”