HONG KONG — The new, high-rolling Chinese owner was supposed to return Inter Milan to its glory days. It spent heavily on prolific scorers like Romelu Lukaku and Christian Eriksen. After five years of investment, the storied Milan soccer club is within striking distance of its first Italian league title in a decade.

Now the bill has come due — and Inter Milan’s future is suddenly in doubt.

Suning, an electronics retailer that is the club’s majority owner, is strapped for cash and trying to sell its stake. The club is bleeding money. Some of its players have agreed to defer payment, according to one person close to the club who requested anonymity because the information isn’t public.

Inter Milan has held talks with at least one potential investor, but the parties couldn’t agree on a price, according to others with knowledge of the negotiations.

Suning’s soccer aspirations are crumbling at home, too. The company abruptly shut down its domestic team four months after the club won China’s national championship. Some stars, many of whom chose to play there instead of in Chelsea or Liverpool, have said they have gone unpaid.

China has failed in its dream of becoming a global player in the world’s most popular sport. Spurred in part by the ambitions of Xi Jinping, China’s top leader and an ardent soccer fan, a new breed of Chinese tycoons plowed billions of dollars into marquee clubs and star players, transforming the economics of the game. Chinese investors spent $1.8 billion acquiring stakes in more than a dozen European teams between 2015 and 2017, and China’s cash-soaked domestic league paid the largest salaries ever bestowed on overseas recruits.

But the splurge exposed international soccer to the peculiarities of the Chinese business world. Deep involvement by the Communist Party make companies vulnerable to sharp shifts in the political winds. The free-spending tycoons often lacked international experience or sophistication.

Now, talks of defaults, fire sales and hasty exits dominate discussions around boardroom tables. A mining magnate lost control of A.C. Milan amid questions about his business empire. The owner of a soap maker and food additive company gave up his stake in Aston Villa. An energy conglomerate shed its stake in Slavia Prague after its founder disappeared.

Suning’s plight reflects “the whole rise and fall of this era of Chinese football,” said Zhe Ji, the director of Red Lantern, a sports marketing company that works in China for top European soccer teams. “When people were talking about Chinese football and all the attention it got in 2016, it came very fast, but it’s gone very fast, too.”

Suning paid $306 million in 2016 for a major stake in Inter Milan. Suning is a household name in China, with stores stocked with computers, iPads and rice cookers for the country’s growing middle class. While it has been hurt by China’s e-commerce revolution, it counts Alibaba, the online shopping titan, as a major investor.

On a brightly lit stage to announce the Inter Milan deal, Zhang Jindong, Suning’s billionaire founder and chairman, raised a champagne glass and talked about how the famous Italian team — which has won 18 championships since 1910 but none since 2010 — would help his brand internationally and contribute to China’s sports industry.

Boasting about Suning’s “abundant resources,” Mr. Zhang promised the club would “return to its glory days and become a stronger property able to attract top stars from across the globe.” 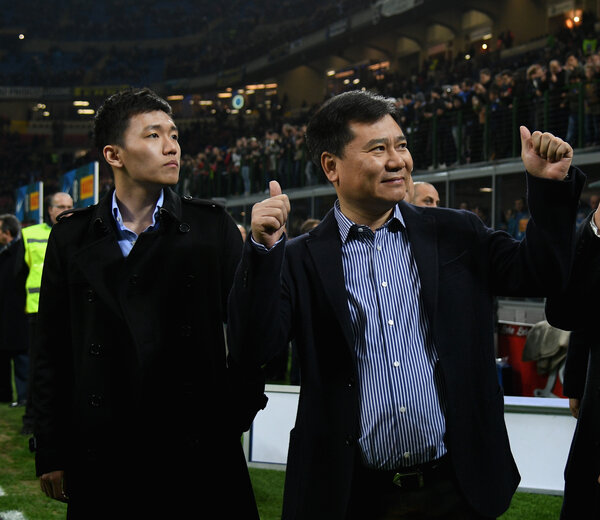 Under the leadership of Mr. Zhang’s son, Steven Zhang, now 29, the club spent more than $300 million on stars like Lukaku, Eriksen and Lautaro Martínez, an Argentine forward nicknamed The Bull for his relentless pursuit of goals.

Suning also agreed to pay $700 million to England’s Premier League for the rights to broadcast games in China beginning in 2019, stunning the industry.

Suning lavished money on a domestic club that it bought in 2015. It spent $32 million to acquire Ramires, a Brazilian midfielder, from Chelsea, and 50 million euros for Alex Teixeira, a young Brazilian attacker, who chose the Chinese team over Liverpool, one of soccer’s most popular franchises.

The recruits were put to work selling air-conditioners and washing machines. In one advertisement, Mr. Teixeira urged viewers to buy a Chinese brand of appliances. “I am Teixeira,” he says in Mandarin, adding, “come to Suning to buy Haier.”

The money, said Mubarak Wakaso, a Ghanaian midfielder, helped make China attractive. “The money that I’m going to make in China is far better than La Liga,” he said in a mix of Twi and English in an interview last year, citing the league in Spain where he once played. “I’m not telling lies.”

Suning’s soccer bets were badly timed. The Chinese government began to worry that big conglomerates were borrowing too heavily, threatening the country’s financial system. One year after the Inter Milan deal, Chinese state media criticized Suning for its “irrational” acquisition.

Then the pandemic hit. Even as Inter Milan won on the field, it lost gate receipts from its San Siro stadium, one of the largest in Europe. Some sponsors walked away because their own financial pressures. The club lost about $120 million last year, one of the biggest losses reported by a European soccer club.

Back in China, Suning was slammed by e-commerce as well as the coronavirus. Its troubles accelerated in the autumn when it chose not to demand repayment of a $3 billion investment in Evergrande, a property developer and China’s most indebted company.

Suning’s burden is set to get heavier. This year, it must make $1.2 billion in bond payments. The company declined to comment.

Then, in February, it shut down its domestic team, Jiangsu Suning, nearly four months after the team won China’s Super League title against an Evergrande-controlled team. At least one of the team’s foreign recruits has hired lawyers to help recoup unpaid salary, according to a person involved in the matter.

One former Suning player, Eder, a Brazilian-born star forward, set the soccer world buzzing after media reports quoted him saying Suning had not paid him. On Twitter, Eder said the comments had been taken from a private, online chat without his permission. His agent did not respond to requests for comment.

To save itself, Suning took a step that could complicate Inter Milan’s fortunes. On March 1, it sold $2.3 billion worth of its shares to affiliates of the government of the Chinese city of Shenzhen. The deal gave Chinese authorities a say in Inter Milan’s fate.

Greater financial pressure looms for Inter Milan. It must pay out a $360 million bond next year. A minority investor in Hong Kong, Lion Rock Capital, which acquired a 31 percent stake in Inter in 2019, could exercise an option that would require Suning to buy its stake for as much as $215 million, according to one of the people close to the club.

Inter Milan officials are looking for financing, a new partner or a sale of the team at a valuation of about $1.1 billion, the person said.

The club until recently was in exclusive talks with BC Partners, the British private equity firm, but they were unable to agree on price, said people with knowledge of the talks.

Without fresh capital, Inter Milan could lose players. If it can’t pay salaries or transfer fees for departing players, European soccer rules say it could be banished from top competitions.

“We are concerned but we are not frightened yet about this situation — we are just waiting for the news,” said Manuel Corti, a member of an Inter Milan supporters club based in London.

“Being Inter fans,” he said, “we are never sure of anything until the last minute.”