A business like Workhorse Group, which employs 130 people and had sales of less than $1 million in the first nine months of the year, would not normally attract much attention on Wall Street.

But these are not normal times.

Workhorse is aiming to make electric delivery vans. Its stock has risen nearly sevenfold this year, and it is not alone. Several of its competitors started trading on the stock market this year and have seen their share prices rocket up.

Because of the success of Tesla and its electric cars, many investors have become convinced that electric vehicles are no fad, and that a real transition away from internal combustion engines is well underway. For a time, investors poured money almost exclusively into Tesla, but that capital has spread to makers of commercial vehicles like Workhorse in anticipation of large orders from companies including Amazon and UPS, which are delivering more packages every year and have pledged to reduce their greenhouse gas emissions.

“We’ve had probably 180 one-on-one meetings this year with different funds and investors that want to hear our story,” Workhorse’s chief financial officer, Steve Schrader, said in a recent interview. “Last year we had one analyst covering us. Now we have six. The phone’s ringing all the time.”

Unlike some of its rivals, Workhorse is not a start-up and has been making small numbers of electric trucks for years. The company has struggled at times and at least once nearly ran out of cash, but executives are hopeful that its breakout moment is at hand.

Interest in the electrification of commercial vehicles is one reason that Wall Street embraced Nikola, a start-up aiming to make hydrogen-powered heavy trucks, whose market capitalization briefly exceeded Ford Motor’s valuation last summer. Even after a plunge of more than 75 percent in its stock price — largely fueled by a hedge fund’s assertion that the company had exaggerated its abilities — Nikola has a market value of more than $6 billion.

At least a dozen companies trying to make electric vehicles or related technology have gone public in the last year, often by merging with special purpose acquisition companies, or SPACs. Also known as blank-check companies, they consist of little more than a stock listing and investor cash.

These publicly traded newcomers include Hyliion Holdings, valued at more than $2 billion. It is trying to develop electric propulsion systems for semi trucks. Lordstown Motors, in which Workhorse has a stake, is working on an electric commercial pickup truck, and has a market capitalization of about $3 billion.

Arrival, based in London, plans to make electric delivery vans and buses. Hyundai and Kia, the Korean automakers, have invested about $120 million in the company. UPS, which has also invested, committed in January to buying 10,000 of the company’s vans. Arrival has announced plans to merge with a SPAC and is expected to begin trading in the first quarter of 2021.

Another company, Rivian, has not gone public but has raised several billion dollars from T. Rowe Price, Amazon, Ford and others. It is developing a pickup and a sport utility vehicle for consumers, and a delivery truck for Amazon.

Tesla itself plans to make a battery-powered semi truck. It is building a plant in Texas to manufacture the vehicle as well as a futuristic-looking pickup truck for consumers. The company has said it hopes to begin producing the semi next year but has warned that output will be limited for a time by a tight supply of battery cells.

Of course, there’s no guarantee of success for any of these electric-truck makers. Competition will be stiff, including from traditional automakers that have manufacturing expertise and established relationships with big fleet operators. Ford, Mercedes-Benz, General Motors and Fiat Chrysler are all planning to sell electric vans and trucks.

“Not all players are going to make it, but there’s super-duper hype right now,” said Gregory Lewis, an analyst at BTIG Research. “There is this generational transition to electric that’s going to happen, and there’s potential for explosive growth, so there’s a lot of excitement.”

Amazon, UPS, FedEx and other owners of big delivery fleets like Anheuser-Busch have outlined strategies to cut their carbon emissions and shift to zero-emissions trucks, noted Jeffrey Osborne of Cowen & Company. And in June, California mandated that commercial truck fleets begin transitioning to zero-emissions vehicles in 2024.

In addition to the 10,000 trucks from Arrival, UPS has ordered 1,000 from Workhorse. About 350,000 delivery trucks are sold annually in the United States, and the market is expanding as the delivery business grows. 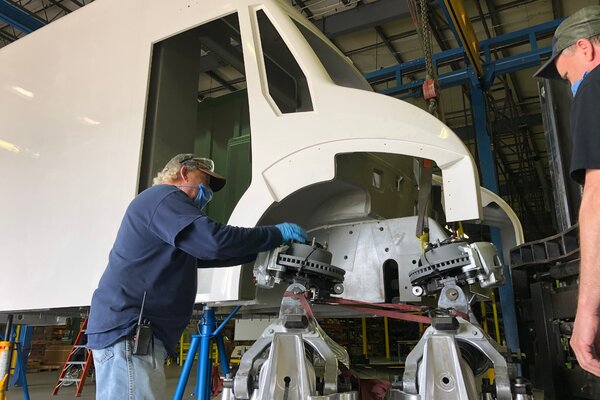 The United States Postal Service is expected to select one or several manufacturers to supply new vehicles for its aging delivery fleet by the end of March — a contract that is expected to run into the billions of dollars. Workhorse is one of the finalists.

“It’s not just manufacturers trying to push electric trucks on their customers,” Mr. Osborne said. “You’ve got companies that want to go electric, and need to because of regulation. So there’s this pull from the purchasing side.”

Ryan Pritchard is one of the people doing the pulling. His family-owned company, Pritchard Commercial, sells some 30,000 trucks a year. His customers are more willing to consider electric vehicles than the average American family, he said.

Many delivery vans typically travel 100 miles or less in a day, so they don’t need large battery packs that can power a vehicle for 300 miles before needing a recharge. Electric fleets can recharge at depots overnight, so the availability of public charging stations is not a concern. And fleet owners are willing to pay more for an electric vehicle, Mr. Pritchard said, because they typically look at how much vehicles will cost to own and operate over 15 to 20 years.

Mr. Pritchard has been putting five Workhorse C-Series vans his company recently bought through a series of winter-driving tests. Pritchard Commercial, based in Clear Lake, Iowa, about halfway between Des Moines and Minneapolis, hopes to eventually acquire 500 Workhorse vans.

Powering vehicles with electricity is less expensive than filling them up with diesel or gasoline, especially for trucks that often get only five or six miles per gallon, Mr. Pritchard said. Maintenance costs are also lower — no oil changes are needed.

“Stop-start driving just grinds up your transmission, but electric vehicles don’t have transmissions,” he said.

A fleet operator might spend about $300,000 to own and operate a diesel truck over 20 years, but the cost of owning an electric truck may be less than half that, according to Workhorse.

Between its founding in 2007 and 2019 Workhorse delivered 365 vehicles, mostly diesel trucks retrofitted to operate on batteries. Some were used by UPS as test vehicles. Using knowledge gleaned from working with the delivery giant, Workhorse designed its C-Series to be electric from the ground up, and analysts think it is a strong contender. The company has firm orders for 1,700 vans.

In 2019, Workhorse was thrust into the national spotlight when its founder, Steve Burns, reached an agreement to buy an idled car plant in Lordstown, Ohio, from G.M. President Trump hailed the deal on Twitter before the companies made a public announcement. Mr. Burns eventually formed Lordstown Motors to buy the plant and use it to make electric pickup trucks. Workhorse owns a 10 percent stake in Lordstown and will receive royalties when it begins producing trucks.

Workhorse’s challenge now is to get its own production started. It had hoped to build 300 to 400 trucks in the current quarter, but more than a third of its 90 production workers fell ill with the coronavirus, causing production to shut down from most of November. Its supplier also had trouble producing enough battery packs. The company reported a net loss of $84 million in the third quarter, and had $80.2 million in cash as of Sept. 30.

Mr. Schrader said production had resumed, but because Workhorse hand-builds most of its vans at its factory in Union City, Ind., it can take days to assemble one truck. The company’s goal is to speed up to five a day by the end of the first quarter, and 10 a day by midyear.

Still, he said he was optimistic about his company’s chances in the crowded field of electric-van makers. While Rivian and Arrival have deeper pockets, Workhorse has already sold a bunch of vans to customers who are using them to make deliveries.

“We’re making stuff now,” he said. “From our standpoint, we think we have two- to three-year lead time. We just need to take advantage of it.”