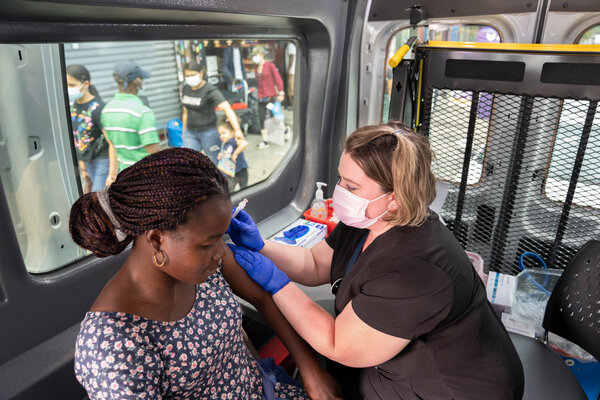 The highly infectious Delta variant now accounts for an estimated 83 percent of new coronavirus cases in the U.S., up from 50 percent in early July. In some regions, the percentage is even higher — particularly where vaccination rates are low.

Two-dose vaccines have been shown to be effective against the Delta variant, but questions have been raised about Johnson & Johnson’s single-dose regimen against Delta. While almost 60 percent of U.S. adults are fully vaccinated, less than half of the total U.S. population is.

Beta variant: All travelers to England from France must quarantine upon arrival over concerns about the Beta variant, which was first detected in South Africa last year and which appeared in 3.7 percent of virus samples sequenced in France.

The number of people in India who have died during the pandemic may be between 3.4 million and 4.7 million, or roughly 10 times the official virus death toll, which stands at 414,000.

More people are calling England’s canals — and the narrow boats used to navigate them — home as remote work options in the pandemic’s wake make a mobile lifestyle more possible.

From Opinion: England is “free” — and in total chaos, writes Tanya Gold.

Wildfires raged across the American West as another scorching heat wave was helping fuel a drought. Smoke from the blazes made its way across the continent, spreading to New York City and elsewhere on the East Coast.

In Oregon, the historic Bootleg Fire, the largest wildfire so far this year in the U.S., is so hot that it is generating its own weather. “Normally the weather predicts what the fire will do,” said a spokesman for the Oregon forestry department. “In this case, the fire is predicting what the weather will do.”

Context: Climate change is causing wildfires to be larger and more intense. The wildfires are among the extreme weather events felt all over the world. Follow live updates here.

The future: In Oakley, a small city in Utah, officials have stopped building in an effort to preserve the little water they have left. Oakley is not alone: Droughts and fires are challenging the future of development across the West.

Haitians look ahead to an uncertain future

A stately memorial was held yesterday for President Jovenel Moïse, Haiti’s assassinated leader, in Port-au-Prince, soon after the sparring members of the government reached a truce, vowing to lead the country anew.

But for many Haitians, the new government feels oddly familiar. The list of new cabinet ministers featured several familiar names from Moïse’s governing party, including the new prime minister and the new foreign minister, both of whom had been angling to take over since the president was killed.

Haiti has for years been locked in place, after furious demonstrators condemning corruption demanded the president’s ouster. Since then, gangs have become more brazen, controlling large parts of the capital, attacking at will, kidnapping children on their way to school and pastors in the middle of delivering their services.

Quotable: “This is a provocation,” Pierre Espérance of the Haitian National Human Rights Defense Network said of the ruling party’s control of the new government. “It means the crisis will continue, insecurity will continue, and the gangs will continue.”

Ties between China and the U.S. are fraying as Beijing pushes back against President Biden. Above, a screen showing a speech by President Xi Jinping of China at an intersection in Beijing this month.

In Bangladesh, families usually crowd markets to pick out prime animals to sacrifice for the major religious festival Eid al-Adha. This year, as coronavirus cases surge, many Muslims are turning to online marketplaces and getting the animals delivered right to their doors.

Jeff Bezos, the world’s richest person, briefly flew to space yesterday. On board with him were the oldest and youngest people to ever visit space: Oliver Daemen, 18, a Dutch student; and Wally Funk, 82, a pioneering female pilot.

New laws across India are seeking to ban all interfaith marriages. Critics contend that such laws fan anti-Muslim sentiment under a government promoting a Hindu nationalist agenda.

The Olympic debut of surfing promises big talent, but as predicted, and feared, the waves on Tsurigasaki Beach may be woefully small. Follow our Olympics live updates.

The U.S. men’s and women’s basketball teams are the latest to be disrupted by the coronavirus.

Six Polish swimmers were sent home from the Olympics this week after the country’s swimming federation arrived in Japan with too many competitors.

Ahead of the Olympics, Norway’s women’s beach handball team was fined by the European Handball Federation after players wore shorts, instead of the required bikini bottoms, during a match over the weekend.

Since their introduction in the mid-1990s, genetically modified foodstuffs have been wildly unpopular with consumers, who see them as dubious tools of Big Agriculture, with potentially sinister impacts on both people and the environment. But the potential benefits have never been greater.

A forgotten queen of 19th-century opera

Pauline Viardot was one of the premier opera figures of her time, a talented singer, composer, teacher and entrepreneur. A London journal in 1848 wrote: “Her technical skill alone is immense; in the completeness of her chromatic scale she is, probably, without a rival.”

So why have so many people never heard of her?

“Like so many influential women of her time, her fame has been eclipsed by that of the men around her,” The Guardian wrote in 2006.

Now, 200 years after her birth, her works are enjoying a resurgence as part of a wave of interest in long-neglected composers. She is a “perfect example of an artist who should be much better known today,” an opera conductor told The Times.

Read more about Viardot and discover her music.

Throwing a picnic is as much about creating a mood as it is about being comfortable. Here’s our guide on how to do it, and a summery pasta salad recipe to get you started.

“The New Bauhaus,” a documentary on the legacy of the Hungarian-American artist Laszlo Moholy-Nagy, makes the case that he should be a household name.

Read our new series about people pursuing their dreams on their own terms — like Vera Jiji, 93, who returned to the cello after a more than 40-year hiatus. Tell us about your own experience here.

Here’s today’s Mini Crossword, and a clue: Words before “no words” (five letters).

That’s it for today’s briefing. See you next time. — Natasha

P.S. Ashley Wu is joining our newsletters team as a graphics editor.

The latest episode of “The Daily” is on Facebook versus the White House.

Claire Moses wrote today’s Arts and Ideas. You can reach Natasha and the team at [email protected].