People across Australia celebrate a return to (almost) normal. 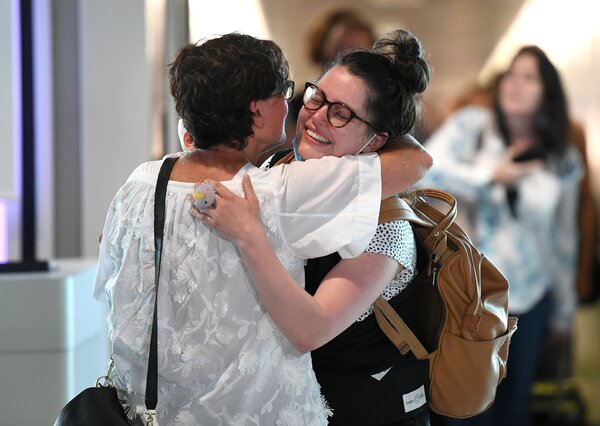 Weddings, workplaces and worship are back in Australia

People across Australia celebrated “Freedom Day,” when months of tough coronavirus restrictions eased in the lead-up to Christmas and summer in the Southern Hemisphere.

In New South Wales and Victoria, more people will be allowed in bars, restaurants, shops and places of worship, and dance halls will be reopened in a limited capacity. “From Monday, life will be very different,” said Gladys Berejiklian, the premier of New South Wales.

In Sydney, up to 5,000 people can attend seated outdoor events, and starting next week, workers are being encouraged to return to the office.

In Victoria, where an outbreak in July sent Melbourne into one of the world’s longest and strictest lockdowns, people can now have 30 people over at their homes and can gather outside in groups of up to 100. Masks have to be worn only on public transport, in indoor shopping centers and at other crowded places. Melbourne also welcomed its first international visitors since June on Monday.

Context: Last month, Victoria effectively eliminated the virus, and has now gone 38 days without a new case. But as people celebrated across the country, officials warned that Australians weren’t in the clear yet. Daniel Andrews, the premier of Victoria, told reporters, “It is not over, it can come back.”

Health care workers, volunteers and the military in Britain will begin administering the Pfizer-BioNTech vaccine on Tuesday morning, aiming to vaccinate more than 20 million people in a few months.

Prime Minister Justin Trudeau of Canada announced that the country will get 249,000 doses of Pfizer’s vaccine this month, with millions more to follow in 2021.

Several countries around Europe are planning to loosen restrictions briefly over the holidays to allow families and friends to gather. In Germany, France and Spain, the weeks before Christmas will be tightly controlled, but residents will be able to gather indoors in small groups for the holiday.

The chairman of Shenzhen Kangtai Biological Products once bribed a regulator to approve a vaccine, though not for the coronavirus, according to court documents. Months later, the chairman, Du Weimin, got the greenlight to begin clinical trials. That government official went to jail in 2016, but Mr. Du was never charged and kept expanding his pharmaceutical company.

Now, Mr. Du is at the forefront of the race to produce a coronavirus vaccine, which is a priority for China’s ruling Communist Party. Kangtai will be the exclusive mainland manufacturer for the AstraZeneca vaccine, and is also in early trials for its own vaccine.

His story is emblematic of the trust issues China’s vaccine industry faces: As China has pushed to develop vaccine companies that can compete globally, it has fostered and protected an industry plagued by corruption and controversy. Weak oversight has led to problems with previous vaccines, rattling the public’s confidence.

How it works: Drug companies have used financial incentives to sway poorly compensated government workers for approval. Hundreds of Chinese officials have been accused of taking bribes in cases involving vaccine companies.

A mysterious illness in India

At least one person has died and hundreds have been hospitalized because of an unidentified illness in the southern state of Andhra Pradesh, reports said Monday.

The illness was detected Saturday evening in Eluru, and since then, patients have experienced symptoms including nausea, anxiety and loss of consciousness. A 45-year-old man hospitalized with symptoms similar to epilepsy and nausea died Sunday evening, the Press Trust of India news agency reported.

An expert team dispatched by the federal government reached the city on Monday to investigate. Officials are still working to determine the cause of the illness: So far, the people hospitalized have tested negative for the coronavirus and other viral diseases like dengue, and water from the area has not shown signs of contamination.

If you have 6 minutes, this is worth it

‘This is insanity’: Investors rush in on start-up boom

When school, work and shopping moved online this year, demand skyrocketed for the tech that makes those interactions possible. Add in low interest rates and a surging stock market, and there is now a frenzy of deal-making, our tech reporter writes. This week, DoorDash and Airbnb plan to go public in the busiest I.P.O. listing period in decades.

“I haven’t seen anything like this in over 20 years,” said Eric Paley, an investor at the venture firm Founder Collective. “The party is as loud and the drinks are flowing as freely as the dot-com boom, despite that we’re all drinking at home and alone.”

Indonesia shooting: Police officers shot and killed six followers of the divisive cleric Rizieq Shihab on the outskirts of Jakarta early Monday, after what the authorities described as an attack on officers who were tailing the men as part of an investigation.

Chinese movie controversy: The movie “Monster Hunter” disappeared from theaters in China after online critics labeled a snippet of dialogue — a pun about knees — racist and called for a boycott. The German company that co-produced the film apologized.

Snapshot: Above, Savoy Vince the koala in Port Macquarie, Australia. Australia is starting its first koala count in years, deploying heat-seeking drones, acoustic surveys and detector dogs to find the marsupials in the wild.

What we’re reading: New York Magazine’s tribute to the businesses that have closed during the pandemic. This farewell to beloved establishments, in place of the magazine’s yearly “Reasons to Love New York” feature, is a devastating sample of what the city has lost this year.

Cook: Pastel, an Israeli spiced beef pie scented with cinnamon, dill and parsley, can be made with store-bought puff pastry, making it extremely simple to make yet wonderfully rich.

Deal: As our homes face more strain and use in the pandemic, your maintenance to-do list may be growing. Here are some easy repairs that require few tools and little know-how.

Watch: Netflix’s “The Prom” features Meryl Streep, Nicole Kidman and more in a satirical comedy adapted from a Tony-nominated musical. It’s one of our picks for the best TV shows and movies new to Netflix, Stan and Amazon in Australia in December.

At Home has our full collection of ideas on what to read, cook, watch, and do while staying safe at home.

How to find, and spread, joy

“Joy” may not be the first word that comes to mind during a pandemic, but people are resourceful. Times readers wrote in to share how they are brightening the days of friends and family, with gestures large and small.

1. “A dear friend recently was given a major medical diagnosis. She’s not ready yet for talking or socially distant visits. Instead I text her daily photos of my cat, who she’s affectionately dubbed the Pinkness.”

2. “Every Monday morning I send a postcard to my three elderly aunties. They live far away and because of Covid cannot have visitors, and calling on the phone is cumbersome because of hearing and other health issues. So, at the start of Covid I started a ritual of writing to them and putting cards in the mail every Monday morning.”

3. “We have a lot of children on our street here in Winston-Salem, N.C. When the weather was warmer, I went to the front porch and played the accordion for the children who were riding their bikes or in a stroller at the same time every day, Monday to Friday. Children’s Happy Hour at 4 p.m. In colder weather, I leave little surprises — a flowering pansy, a special rock or a little card every day under the mailbox. This becomes a destination for the end of their daily walk. The parents appreciate this. And it brings me great joy too.”

Thank you
To Theodore Kim and Jahaan Singh for the break from the news. You can reach the team at [email protected]

P.S.
• We’re listening to “The Daily.” Our latest episode is about one Republican election official condemning President Trump’s baseless fraud claims about the presidential election.
• Here’s our Mini Crossword, and a clue: Thin vertical line on a music note (four letters). You can find all our puzzles here.
• Lori Leibovich, a lifestyle and health journalist who worked at The Skimm, is joining The Times as editor of Well.