We’re covering trade tensions between the U.S. and China, and New Zealand’s shifting gears on Covid. 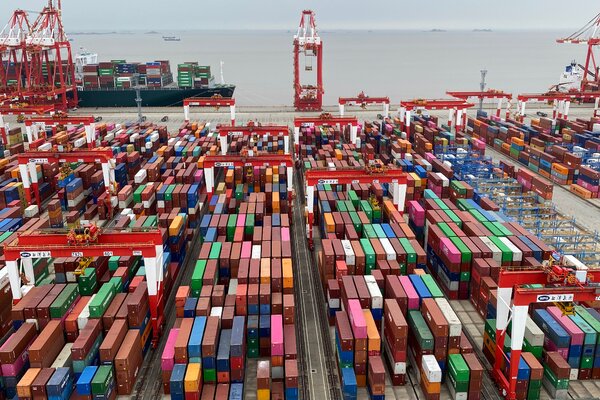 Biden takes a hard line on trade with China

The Biden administration offered its strongest signal yet that the U.S. would maintain the combative economic approach toward China that was adopted under former President Trump, using trade barriers and other punitive measures.

Senior administration officials said before U.S.-China trade talks that President Biden would not immediately lift tariffs on Chinese goods and that he would hold Beijing accountable for trade agreements made during the Trump administration.

Katherine Tai, the U.S. trade representative, said she would begin talks in the coming days with her Chinese counterpart. “We will use the full range of tools we have and develop new tools as needed to defend American economic interests from harmful policies and practices,” she said in a speech on Monday.

Details: The strategy will require China to uphold commitments from an initial trade deal reached in 2020, including its promise to buy an additional $200 billion worth of American goods and services by 2021. China is on pace to fall short of its purchasing commitments, according to one expert tracking the purchases.

But in a move that would provide some relief for businesses that import Chinese products, U.S. officials said they would bring back a process that excludes certain companies from tariffs.

Context: Biden’s hard-line approach to China comes at a moment of extraordinary tension between the world’s largest and second-largest economies and remarkably little interchange between their governments.

Related: Shares of China Evergrande were halted on Hong Kong’s stock exchange on Monday, pending an unspecified deal, as doubts swirled over whether the struggling property giant would be able to meet its huge financial obligations.

Prime Minister Jacinda Ardern acknowledged that the “Covid zero” goal of eliminating the coronavirus in New Zealand would be dropped and that restrictions would be gradually lifted in Auckland.

Her announcement on Monday came seven weeks into a lockdown that has failed to halt an outbreak of the Delta variant. The move marked the end to the aggressive strategy the country has pursued for a year and a half, closing borders and quickly enforcing lockdowns over even a few cases to keep the virus in check.

Early in the pandemic, New Zealand won praise for its approach, but it has become less tenable with the highly contagious Delta variant. Now, Ardern said, New Zealand will work to achieve widespread vaccination.

Auckland: New Zealand is still reporting dozens of new cases a day, almost all of them in Auckland, its biggest city, after the latest outbreak began in mid-August. The mood there has soured as a lockdown stretched on.

Quotable: “For this outbreak, it’s clear that long periods of heavy restrictions has not got us to zero cases,” Ardern said. “What we have called a long tail,” she added, “feels more like a tentacle that has been incredibly hard to shake.”

Britain streamlined England’s restrictions on international travel into and out of the country and eased testing and quarantine rules for fully vaccinated arrivals.

The police are investigating whether the son of one of Prime Minister Narendra Modi’s ministers was in a vehicle that slammed into protesters on Sunday, killing four farmers and four others.

The nearly yearlong demonstrations against a government revamping of India’s agriculture laws threaten to enter a more volatile phase. Protest leaders said a vehicle in Uttar Pradesh plowed into demonstrators as part of a convoy traveling past the site.

Ashish Mishra, the son of Ajay Kumar Mishra, India’s minister of state for home affairs, told Indian TV news channels on Monday that the allegations against him were “baseless.”

The Taliban’s repression of women in Afghanistan may be more tactical than ideological, our Interpreter columnist writes.

The Nobel Prize in Physiology or Medicine was awarded to two scientists whose work identifying how people sense heat, cold, touch and their own movements has opened the door to non-opioid painkillers.

London’s Metropolitan Police on Monday announced an independent review after an officer was arrested and charged with rape. It came just days after another officer was sentenced for the killing of Sarah Everard.

Military personnel in Britain began driving fuel tankers on Monday amid a shortage of drivers and disruptions in fuel supplies.

William Shatner, who played Captain James Kirk in “Star Trek,” will launch to the edge of space this month aboard a rocket built by Jeff Bezos’ private space company.

During the coronavirus pandemic, residents of Venice found that the decrease in tourism made their city feel more like home. Officials are trying to keep it that way, but some of their plans — buying the cellphone data of unwitting visitors, using surveillance cameras, installing gates at key entry points — have Venetians worried they will live in a dystopian museum.

The Beatles in the classroom

Would you get a master’s degree in the Beatles? In the band’s hometown, a postgraduate program aims to turn fans into students of the Fab Four’s legacy by studying their sociological, historical and economic impact.

As a new semester began last week at the University of Liverpool, 11 eager students, ages 21 to 67, trooped into class to start the program. One wore a Yoko Ono T-shirt, while another had a yellow submarine tattooed on his arm, Alex Marshall writes in The Times. Two had named their sons Jude, after one of the band’s most famous songs.

Academics have studied the Beatles for decades, and the band is big business locally: Liverpool’s association with the band was worth over $110 million a year, a 2014 study found. Tourists visit sites named in the band’s songs and venues where the group played.

Two professional tour guides in the course said they hoped the program would help them attract customers. “The tour industry in Liverpool is fierce,” one said.

One student, Alexandra Mason, recently completed a law degree but decided to change track when she heard about the Beatles course. “I never really wanted to be a lawyer,” she said. “In my mind, I’ve gone from the ridiculous to the sublime.”

This classic lasagna is worth the effort.

Are you watching “Squid Game”? The dark Korean drama, where desperate characters play lethal children’s games for money, is on track to become Netflix’s most popular original series ever, Vulture reports.

Immerse yourself in the visual splendor of a tiny volcanic island in the northern Andaman Sea, the only home of the little-known Narcondam hornbill.

That’s it for today’s briefing. See you next time. — Melina

P.S. The Times won the top prize in the Visual Storytelling category in the Gerald Loeb Awards.

The latest episode of “The Daily” is about how ivermectin, a drug used to treat livestock, became the unproven Covid medication of choice for some reluctant to receive vaccines.

Sanam Yar wrote the Arts and Ideas section. You can reach Melina and the team at [email protected].