We’re covering strict hotel quarantines in Britain, work stoppages to oppose the military coup in Myanmar and the winter storms buffeting the U.S. 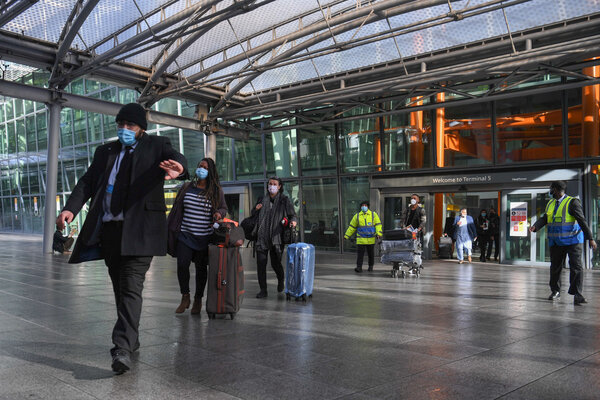 New arrivals to England from South Africa, Brazil and 31 other countries deemed to be hot spots for coronavirus variants are now required to spend 10 days quarantining in a government-sanctioned hotel at a cost of nearly $2,500 for an adult. Travelers from elsewhere are required to quarantine at home for 10 days.

Scotland is requiring all international air passengers, no matter where from, to isolate on arrival in a government-sanctioned hotel.

Related: Britain has given first doses of a vaccine to more than a fifth of the population. At a news conference on Monday, Prime Minister Boris Johnson called the vaccination campaign “an unprecedented national achievement” but warned that the threat from the virus remained dire.

The World Health Organization authorized the use of the AstraZeneca-Oxford vaccine, clearing a path for the cheap and easy-to-store shots to be distributed in lower- and middle-income countries.

A study in Israel found that the Pfizer vaccine reduced symptomatic infections by 94 percent, mirroring the results of clinical trials.

Italy made a last-minute decision to reverse course on a plan to allow visitors back to its ski slopes, pushing a reopening that was set for Monday to March 5 at the earliest.

Zimbabwe will begin vaccinations this week, the president announced, with 200,000 doses of the Sinopharm vaccine donated by China, on top of the 600,000 doses that Zimbabwe purchased.

Two weeks after the military seized power in a coup in Myanmar, work stoppages and walkouts are undermining the ruling generals’ attempt to assert authority.

Despite soldiers’ efforts to intimidate them, hundreds of thousands of doctors, bankers, trash collectors, electricity workers and essential employees have kept protesting.

The civil disobedience movement targets services essential to military rule and is gaining support. At the nation’s power provider, about 60 percent of employees have walked off their jobs. In Yangon, people have started taking their own trash to neighborhood garbage bins during the trash collectors’ walkout.

Quote: “There is no way we can work under a dictatorship,” said Dr. Kyaw Zin, a surgeon who led one of the nation’s first walkouts at the government-run Mandalay General Hospital. “I am pretty sure we can bring down the regime.”

Jacob Zuma, the former president of South Africa whose tenure was roiled by corruption scandals, refused to appear before an inquiry panel about his role in corruption in the governing African National Congress on Monday, raising the possibility that he would be imprisoned for contempt.

The panel’s leader, Deputy Chief Justice Raymond Zondo, said he was seeking an order from the Constitutional Court, the country’s highest court, that would “impose a term of imprisonment on Mr. Zuma.” Mr. Zuma has accused the justice of harboring a personal vendetta against him.

Context: Mr. Zuma first instituted the inquiry in 2018 after a report detailing the extent of corruption in state-owned companies and government departments during his administration. In its far-reaching mandate, the commission has interrogated more than 250 witnesses.

If you have 7 minutes, this is worth it

The Taliban close in

As the Taliban encroach on key Afghan cities, the Biden administration is weighing whether to withdraw U.S. troops supporting Afghanistan’s beleaguered army and security forces. It’s a no-win situation. If the U.S. pulls out, the insurgents could take control of major cities. If troops stay, the Taliban could renew attacks.

Our correspondent visited Panjwai, above, a district that neighbors Kandahar city, where the ranks of the police force have thinned so much that injured officers are forced to keep working.

Australian Parliament: Prime Minister Scott Morrison’s Liberal Party has come under criticism for the way it handled accusations of rape in the Parliament building from a former government staff member, who said she was assaulted after she fell asleep on a couch in the defense minister’s office.

St. Andrews: Students, staff members and academics at the Scottish university and across the world have spoken out after the college did not renew the contract of Alison Duncan Kerr, the director of its Institute for Gender Studies.

Climate activism: Disha Ravi, a 21-year-old activist, has been jailed in New Delhi for distributing a “tool kit” in the form of a Google Doc intended to drum up support for farmers who have been protesting against the Indian government for months.

Snapshot: Above, a group of students help push a stuck vehicle in Austin, Texas, on Monday. Nearly 3.5 million homes and business were left without electricity as a coast-to-coast winter storm pummeled much of the U.S. States like Texas, Louisiana and Arkansas, which are less used to winter weather, were particularly disrupted.

Welcome to Clubhouse: Inside the fast-growing audio chat app whose users include Elon Musk, the rapper Vanilla Ice and the artist Ai Weiwei. Separately, the social network Parler is back online after Amazon and other tech giants cut off the company for hosting calls for violence around the time of the Capitol riot.

What we’re reading: This Rest of World article about the people fighting for Urdu’s digital future. It’s a beautiful long read that touches on what the expansion of the internet does to languages.

Cook: This spiced fried chicken is a staple in the night markets of Taiwan. Sue Li, the recipe’s developer, also made a how-to video.

Listen: Our pop music critics pick out 13 new and notable releases — among them, Taylor Swift’s first official release from her rerecorded back catalog and a cheeky new Dua Lipa track.

Watch: In “Minari,” a Korean-American family adjusts to rural life on an Arkansas farm. The Times’s film critic A.O. Scott calls it “moving and downright revelatory.”

Get our best ideas for living a full and cultured life, with our At Home collection on what to read, cook, watch and do indoors.

The most popular pet name of the century (maybe)

It’s Princess. Or Tiger, for cats.

These were the findings of a survey conducted by the company FirstVet from Hartsdale Pet Cemetery in Hartsdale, N.Y. The oldest continually operating pet cemetery in the United States, it was founded in 1896 and is home to more than 80,000 buried pets.

While Princess and Tiger seem to have weathered periodic changes in taste, other names have enjoyed briefer spells in the sun. According to the survey, the most common dog names in the 1930s and ’40s were Queenie and Tippy; Lady ruled the ’60s; and Brandy rose to the top in the ’70s. The ’80s, ’90s and aughts were all dominated by Max, a trend perhaps linked to the popularity of the “Mad Max” film series.

Some owners gave a series of their pets the same name, followed by a number that indicated the pet’s place in the lineage, known as a regnal number. The highest regnal number in the cemetery belongs to Virgo XIII, who was buried in 1986, followed by Silvia IV in 2001.

Back in 1985, The Times reported a shift in canine nomenclature toward the human, sometimes relating to the breed of the dog. “Sled dogs — malamutes, Siberian huskies — often have the Russian ending -asha in their names,” observed one breeder. “Awful lot of Sasha, Tasha and Masha.” Irish setters often went by Kelly, German shepherds by Fritz and huskies by Nanook.

Of course, there has always been plenty of individuality in pet naming. While Princess and Max each came up “between 150 and 250 times in the sample shared,” wrote David Prien, a founder and the chief executive of FirstVet, in an email, “some names are completely unique within Hartsdale Cemetery, such as ‘Dorian Grey’ and ‘Fleetwood.’”

That’s it for this briefing. See you tomorrow.

Thank you
Theodore Kim and Jahaan Singh provided the break from the news. You can reach the team at [email protected]

P.S.
• We’re listening to “The Sunday Read.” Our latest episode is about scam calls in the U.S. (The Daily will be back tomorrow.)
• Here’s our Mini Crossword, and a clue: “Come on, ___ you!” (five letters). You can find all our puzzles here.
• Three New York Times films are Oscar contenders: “Time,” a film from The Times and Amazon, and two Op-Docs, “Hysterical Girl” and “A Concerto Is a Conversation.”