The U.A.E. gives China’s vaccine a vote of confidence. 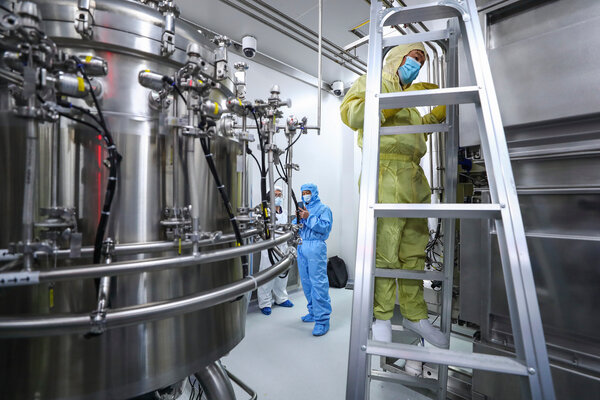 The United Arab Emirates said on Wednesday that it had approved a Chinese coronavirus vaccine after preliminary data showed that it was 86 percent effective. It is the first government to grant approval to the vaccine developed by Sinopharm, a state-owned vaccine maker.

If results from elsewhere show similar findings, the Chinese vaccines could offer a lifeline to developing countries that cannot afford vaccines from the United States that are likely to be more expensive and more difficult to transport.

Data: Chinese officials and Sinopharm were silent on the Emirati announcement. Scientists noted that it was lacking in data and other critical details. Sinopharm has been running trials in 10 countries, data from which has not yet been released.

A “cruise to nowhere” from Singapore has ended early — back where it started — after a passenger tested positive for the virus.

Canada has approved Pfizer’s vaccine for use in people over the age of 16. Inoculations could begin as soon as next week.

More than a third of Americans live in areas where hospitals are running critically short of intensive care beds during the country’s deadliest week of Covid-19.

Chancellor Angela Merkel on Wednesday pleaded with Germans to meet fewer people and stay at home over the holidays. “From the bottom of my heart, I am really sorry,” she said. “But if the price we pay is 590 deaths a day then I have to say this is not acceptable.”

The year’s largest I.P.O. is a boost for SoftBank

The food delivery app DoorDash surged 78 percent in its stock market debut on Wednesday. The company leads the U.S. delivery market with more than 18 million customers, and it provides some welcome relief for one of its backers, the Japanese conglomerate SoftBank, which lost money on WeWork and other bad bets.

DoorDash’s stock opened at $182 on the New York Stock Exchange, valuing it at roughly $39 billion. The company raised $3.4 billion, making it the largest initial public offering of the year.

Another major start-up is going public this week: The home-rental platform Airbnb could be valued at as high as $42 billion. Opendoor, a real estate start-up also backed by SoftBank, plans to go public by the year’s end.

Details: With people stuck at home, DoorDash’s revenue more than tripled to $1.92 billion in the first nine months of the year compared with $587 million in the same period last year. Its growth is likely to slow.

The Times’s visual investigations team analyzed new satellite images showing that Iran is building a key part of its nuclear facility underground in mountains to protect it from possible attack.

New tunnel entrances for underground construction are visible under a ridge in the mountain foothills south of the facility in Natanz, about 140 miles south of Tehran. The construction was prompted by a July explosion that destroyed a building at the Natanz site. Iran has blamed Israel and the U.S. for the explosion.

Quotable: “The new facility is likely to be a far more secure location for centrifuge assembly — it is located far from a road and the ridge offers significant overburden that would protect the facility from air attack,” said Jeffrey Lewis, an arms control expert who worked with The Times to analyze the new images.

Related: Iranian authorities have detained a number of people accused of involvement in the assassination of the country’s top nuclear scientist last month near Tehran, a parliamentary adviser said on state TV.

If you have 12 minutes, this is worth it

A vaccine that fell behind in the U.S.

Regulators in Britain, India and several other countries are expected to authorize the Oxford-AstraZeneca coronavirus vaccine in the coming weeks. But in the U.S., where regulators have been frustrated with AstraZeneca and want to examine data from a greater number of trial participants, that approval appears further off.

Our reporters pieced together the series of communication errors and delayed trials that led to the drugmaker’s diminished credibility with U.S. regulators.

Brexit: With an endgame fast approaching, Prime Minister Boris Johnson headed to Brussels on Wednesday for critical talks that could determine the shape of Britain’s relations with continental Europe for decades to come. European Union leaders will meet in the city on Thursday.

Japan assault case: When the only female assembly member in the town of Kusatsu accused the mayor of sexual assault, assemblymen organized an election to recall her. Her experience highlights the difficulties faced by women who come forward with allegations of sexual assault in Japan.

Illness in India: Officials found traces of nickel and lead in a few blood samples taken from hundreds of patients who were hospitalized by a mysterious illness in the southern state of Andhra Pradesh.

Twitch: The livestreaming platform popular among video game players unveiled new guidelines on Wednesday aimed at cracking down on hateful conduct and sexual harassment on its site.

Snapshot: Above, a doctor comforting a Covid-19 patient in an intensive care unit in Houston in November. It’s part of our Year in Pictures, which captures an extraordinary 12 months through a pandemic, racial unrest and democracy in crisis.

What we’re reading: This New Republic article on a new biography about the author of the children’s book Harriet the Spy. Amelia Nierenberg, who writes our Coronavirus Schools briefing, says: “Harriet the Spy is, perhaps, my favorite children’s book of all time. The piece on Louise Fitzhugh offers insight into the swirling Cold War politics and queer counterculture behind Harriet’s secrecy.”

Cook: The textures in these delicious pajeon, traditional Korean scallion pancakes, are manifold: meaty from the squid, crunchy yielding to soft from the fried bits of batter, juicy from the scallion.

Listen: We asked some of our favorite artists to choose the best of Beethoven’s stormy, tender music. The composer was born 250 years ago this month.

Do: Here’s how stress affects your skin, and some tips on minimizing its toll.

Let us help you unwind with our At Home collection of ideas on what to read, cook, watch and do while staying safe at home.

Ending this pandemic and preparing for the next one

The Times gathered a group of doctors, medical scholars and health care executives to discuss the arrival of coronavirus vaccines and how battered American institutions should prepare for the next pandemic while repairing the damage wrought by this one. Here’s what they had to say.

An effective vaccine will be a huge breakthrough for society and the economy. It would also be a staggering scientific achievement.

Gregory Poland of the Mayo Clinic, who is also editor in chief of the journal Vaccine, described the vaccine “as nothing short of dizzying.”

“We were all prepared to see something like 50 to 70 percent efficacy, something like that. And to be in excess of 90 percent, 95 percent, puts it on par with the best vaccines that have ever been developed — and with apparent acceptable short-term safety. I think this is really going to have a profound effect on the field of vaccinology. I hate to overuse the word ‘paradigm-breaking,’ but it is, in many ways.”

To get back to normal more quickly, the most vulnerable should be vaccinated first.

Marc Lipsitch, professor of epidemiology and director of the Center for Communicable Disease Dynamics at the Harvard T.H. Chan School of Public Health: “The only certain way, given what we know about the vaccine now, to get society back to being able to function is to have this be a less-severe disease. And the way you do that is to make the people in whom it’s severe no longer vulnerable.”

The U.S. needs to re-establish trust in institutions because pandemics are here to stay.

Monica Schoch-Spana, a medical anthropologist who studies the ways communities respond to disaster: “This is about trust, and trust building, and processes of reconciliation. And that takes time. And during that time, we can improve our messaging and involve trusted messengers. But what we’re talking about is re-establishing trust in institutions. We have to build processes for that, and strengthen the ones that are already there.”

Thank you
Carole Landry helped write this briefing. Theodore Kim and Jahaan Singh provided the break from the news. You can reach the team at [email protected]

P.S.
• We’re listening to “The Daily.” Our latest episode is about the vaccine drive in Britain.
• Here’s our Mini Crossword, and a clue: More than 30% of the earth’s mass (four letters). You can find all our puzzles here.
• Mike Ives, who used to write the Europe Briefing, will join our Express desk as a general assignment reporter in Seoul.