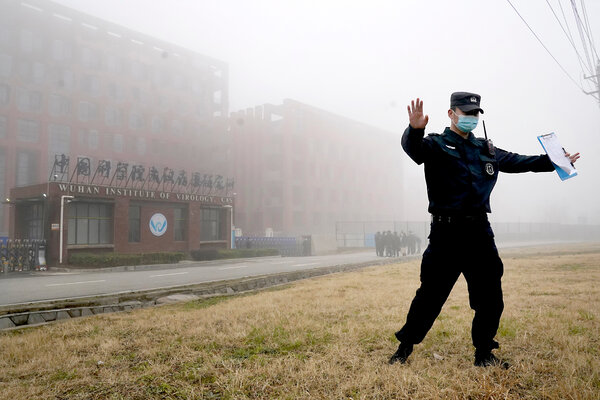 Biden calls for a new inquiry into the coronavirus

President Biden has ordered U.S. intelligence agencies to investigate the origins of the coronavirus, calling for a broad government report on whether the virus was accidentally leaked from a lab in Wuhan, China. He has given them 90 days to report back.

The request came as the W.H.O. faced criticism over a March report dismissing the possibility of a lab accident. The theory was largely drowned out last year by scientists’ accounts of the virus’s more likely path from an animal host to humans in a natural setting.

Quotable: Testifying to Senate lawmakers, Dr. Francis Collins, the National Institutes of Health director, said the virus “most likely” arose naturally. “But we cannot exclude the possibility of some kind of a lab accident,” he added.

Scientists have found that immunity to the coronavirus lasts at least a year, and possibly longer, and improves over time when enhanced by vaccines.

Lawyers for the E.U. say they will seek billions in penalties if AstraZeneca doesn’t deliver vaccine doses.

Testifying before lawmakers, Dominic Cummings, the former top aide to Prime Minister Boris Johnson, described chaos and incompetence at the heart of the British government during the early days of the pandemic.

Belarus’s diversion of a plane heading to Lithuania and its arrest of a journalist who was on board may have opened a new, more complicated chapter in the already convoluted relationship between Aleksandr Lukashenko, Belarus’s leader, and President Vladimir Putin of Russia.

The two are increasingly leaning on each other, though they have sharply diverging interests. Putin wants more influence on Belarus, and Belarus’s leader wants an ever-tightening iron grip.

Belarus is a country of just 9.5 million people, but for Putin, it is both a critical ally and a strategic problem — especially as Russia seeks to smooth out its relationship with the West. (For those catching up, here’s what’s happening in Belarus.)

Putin’s choice: President Biden will hold his first face-to-face meeting with Putin in three weeks. The Russian leader will have to decide how far he will go to continue supporting Lukashenko.

Related: Russia has raised the heat on Google, Twitter and Facebook in an online crackdown of criticism against the government.

The U.S.’s diplomatic outreach to Palestinians

Antony Blinken, the U.S. secretary of state, on Tuesday promised the Palestinian government $112 million in aid and a reopened consulate in Jerusalem, both part of a broad pledge to rebuild ties that had been severed by the previous administration in favor of Israel.

But doing so risks angering Israel, the most reliable U.S. ally in the Middle East, whose leaders are already anxious about the Biden administration’s attempts to rejoin a nuclear agreement with Iran. Israel has long opposed and worked to undermine a deal.

With the raw emotion of deaths and wreckage from an 11-day war still fresh in the minds of both Israelis and Palestinians, Blinken’s actions represented, in tone at least, an attempted revival of America’s former role as a more neutral mediator in the Middle East’s most protracted conflict.

Innocent lives: At least 66 children were killed during the violence this month, almost all of them Palestinian, according to initial reports. These are the children who died — children who dreamed of becoming dentists or engineers, who liked languages or riding their bikes and who were adored by their parents and siblings.

The police in Italy arrested three people over a cable car crash that killed 14 people during the weekend. Our reporter visited the town of Stresa, where the tragedy was a blow just as the local economy was brightening up after a tough run during the pandemic.

Laurence des Cars, the current head of the Musée d’Orsay and the much smaller Musée de l’Orangerie, will become the first female leader of the Louvre in its 228-year history.

A Dutch court ruled that Royal Dutch Shell, Europe’s largest oil company, must do more to reduce carbon dioxide emissions. The decision represented a breakthrough in terms of a court’s willingness to dictate what a big business must do to protect the climate.

News From The U.S.

A transit worker opened fire and killed eight people at a rail yard in San Jose, Calif. Here’s what we know so far. There have been more than 230 mass shootings in the U.S. so far in 2021.

Amazon announced it would acquire Metro-Goldwyn-Mayer, the 97-year-old film and television studio that is home to James Bond, “Thelma & Louise” and Rocky, for $8.45 billion.

Shareholders of Exxon Mobil elected at least two climate activists to its board — a stunning defeat for the company’s management.

What Else Is Happening

Militants attacked a key town in Mozambique. We interviewed survivors and used videos, satellite imagery and tracking data to show how Mozambique’s government failed to protect its civilians.

Citing mental health concerns, Naomi Osaka, the world No. 2 tennis player, wrote on Instagram yesterday that she would not talk to journalists at the French Open.

Dai Guihua, a 31-year-old mother of two in Langtang, a Chinese mountain town, wished for a better life for her family. But then her husband vanished, his white car plunging into a river, after they had racked up steep medical bills for their daughter.

Twenty-two days later, she walked to a pond and took her own life, as well as those of her son and daughter. Her story has became a symbol of the struggles of people in rural China who have been left behind by the country’s economic boom.

“In the light of the moon, a little egg lay on a leaf.” Eric Carle, the artist and author of more than 70 children’s books, including “The Very Hungry Caterpillar,” has died at 91.

These days, the fastest way to become a food celebrity is not through the Food Network, but on TikTok. The app has spawned viral food trends — like baked feta pasta and dalgona coffee — as well as a new generation of cooking stars who are largely self-taught, preparing meals in their home kitchens.

Within 24 hours of posting his first TikTok in 2019, Eitan Bernath, now 19, had tens of thousands of followers. His upbeat and approachable food videos have since earned him over a million more, and he has three full-time employees, as well as a gig as a resident culinary expert on “The Drew Barrymore Show.”

For many fans, the cooking stars’ lack of professional training is part of the appeal. “I think what TikTok has done with Gen Z and teaching people how to cook, it’s just more relatable,” Bernath told the Times. “The feedback I hear all the time is, ‘If this 18-year-old Eitan can cook this so effortlessly, then I can, too.’” Read Taylor Lorenz’s full story.

This perfect peach pie, with its sprinkle of nutmeg, is one of the dishes our Cooking and Food staff is most excited to eat this summer. Here’s the full list.

The forthcoming “Friends” reunion is “the superexpressway of memory lanes,” our critic writes.

Rivka Galchen’s novel “Everyone Knows Your Mother Is a Witch,” about an illiterate 17th-century woman accused of a poisoning, is among June’s most noteworthy new books.

That’s it for today’s briefing. Thanks for joining me. — Natasha

P.S. Karan Deep Singh, one of our correspondents in New Delhi, joined the Axios Re:Cap podcast to discuss the Covid crisis in India.

The latest episode of “The Daily” is about Hamas.

Sanam Yar wrote today’s Arts and Ideas. You can reach Natasha and the team at [email protected].