The U.S. prepares to start vaccinating.

We’re covering the first vaccines to be rolled out in the U.S., a new climate pledge from China and a surge in bicycles in the Philippines. 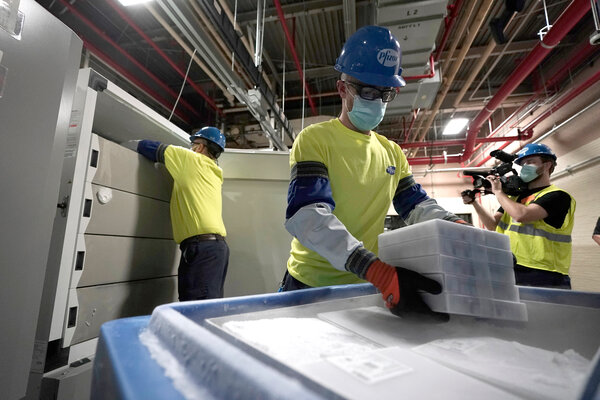 The most ambitious vaccination campaign in U.S. history is set to kick off this week after drug regulators approved a vaccine developed by Pfizer and BioNTech. The rollout comes as the U.S. coronavirus death toll approaches 300,000.

The vaccine’s arrival in the U.S. — the country with by far the biggest coronavirus caseload — is happening amid fears that Americans will continue to crowd together indoors over the holiday season and fuel the surge in cases, hospitalizations and deaths.

Shipments of doses traveled by plane and guarded truck over the weekend to designated locations, mostly hospitals, in all 50 states. The first injections will start to be given no later than Monday to high-risk health care workers.

Britain began inoculations last week; Canada will also deliver its first shots this week. Here’s a look at how their health care systems are tackling the effort.

Japan’s daily coronavirus cases on Sunday exceeded 3,000 for the first time and South Korea set another record for its daily tally with 1,030 cases.

In the coming weeks, major airlines, including United, JetBlue and Lufthansa, plan to introduce a health passport app called CommonPass, which aims to verify passengers’ coronavirus test results — and perhaps soon, their vaccinations.

Bahrain said on Sunday that it had approved a Chinese vaccine against the coronavirus, following the lead of the United Arab Emirates.

Speaking at an online summit on the fifth anniversary of the Paris climate agreement, Xi Jinping, China’s leader, said on Saturday that by 2030, China would reduce its carbon intensity by over 65 percent.

Carbon intensity is a measure of greenhouse gas emissions relative to economic activity. Meeting the goal would mean that as China’s economy grows, so would its emissions, but at a slower rate than before. Mr. Xi also said China would triple wind and solar power capacity to over one billion kilowatts and expand its forests.

Context: China is the biggest producer of planet-warming gases, and whatever it does to tamp down its emissions is a key to addressing climate change. Environmental advocates had hoped Mr. Xi would pledge to reduce carbon intensity more sharply, but the economic downturn spurred by the coronavirus pandemic may have tempered Beijing’s plans.

Related: European Union leaders have agreed to cut net carbon emissions by 55 percent in the next decade, overcoming the concerns of nations heavily dependent on coal and taking a critical step to become climate-neutral by 2050. Prime Minister Boris Johnson of Britain promised to end direct taxpayer support for overseas fossil fuel projects as soon as possible.

The chief executive of ARG Outlier Media, which owns Republic TV, was accused of involvement in a scheme to falsely bolster ratings data at the right-wing news broadcaster. The arrest of the executive, Vikas Khanchandani, in Mumbai on Sunday comes as the Indian news media slides deeper into a polarized atmosphere.

In recent years, Republic TV has made a name for itself by embracing right-wing causes and aggressively backing Prime Minister Narendra Modi’s administration. But the network’s relationship with the local administration in Mumbai is more fraught.

Details: Mr. Khanchandani has not been formally charged, but investigators said they arrested him after he refused to cooperate.

If you have 20 minutes, this is worth it

A mother stalked her daughter’s killers

Over the course of three years, Miriam Rodríguez captured nearly every member of the Mexican crew that abducted and murdered her 20-year-old daughter, Karen. On Mother’s Day, 2017, weeks after she had chased down one of her last targets, she was shot in front of her home and killed.

For many in the northern city of San Fernando, her story represents so much of what is wrong in Mexico, our correspondent writes. The country is so torn apart by violence and impunity that a grieving mother had to solve her daughter’s disappearance largely on her own, and died violently because of it.

South Korea’s most infamous rapist: Cho Doo-soon was released on Saturday after serving 12 years in prison, prompting angry demonstrations and anonymous death threats. Mr. Cho was convicted of raping an 8-year-old girl. His name has since become synonymous with the lenient treatment sex offenders are said to receive in the country’s courts.

Brexit: Britain and the European Union agreed on Sunday to extend a deadline for trade talks and avoid a disruptive no-deal outcome before Dec. 31. A failure to come to terms could lead to disruptions of food shipments, threaten British manufacturing industries and ignite disputes between British and French fishing boats.

U.S. protests: After a Supreme Court ruling dashed President Trump’s hopes of invalidating his November electoral defeat, thousands of his supporters marched in Washington and other cities on Saturday. Four people were stabbed in Washington, D.C. and a person was shot in Olympia, Wash.

Snapshot: Above, bike commuters heading to Manila in October. After public transit was restricted in the Philippine capital because of the coronavirus pandemic, residents hopped on bikes instead. The biking boom led officials to announce a plan for building a 400-mile bike lane network.

What we’re reading: This Guardian article asks the question: Has a year of living with Covid-19 rewired our brains? It’s a wide-sweeping view of how we might be approaching life when this is all over.

Listen: Charley Pride, who died on Saturday of complications from Covid-19, was country music’s first Black superstar on the strength of hits including “Kiss an Angel Good Mornin’” and “Is Anybody Goin’ to San Antone.”

Read: Our poetry columnist has picked the year’s best books of poetry, including “Emporium” by Aditi Machado.

Let us help you start off your week with something new. At Home has our full collection of ideas on what to read, cook, watch, and do while staying safe at home.

One extraordinary year and half a million photos

The Year in Pictures project is an annual celebration of photojournalism. In 2020, photographers were living what they captured. Here’s how it came together.

In recent months, two photo editors — David Furst of the International desk and Jeffrey Henson Scales from the Opinion section — reviewed around half a million published and unpublished photographs.

“I don’t know that I have ever come across a body of work that’s as complicated as this one,” David said.

In addition to an introduction written by Dean Baquet, The Times’s executive editor, the project includes firsthand accounts from photographers, who provide behind-the-camera context. There are always photographers around the world living the story they cover — under oppressive governments, or in residential neighborhoods that turn into battlefields of war — but in 2020, everyone lived it.

The first photo that appears was taken on Jan 1. Just seconds into 2020, in the heart of Times Square, the photographer Calla Kessler captured what was most likely the first New Year’s photo of a same-sex couple kissing to be printed on the front page of The Times.

Nearly every editor and writer who worked on The Year in Pictures had the same reaction to the celebratory scene in the frame: “These people had no idea what was coming.”

When asked what he wants readers to come away feeling, Jeffrey responded: “It was a long year, filled with heroics. And thus far, we’ve made it through. Be glad of that.”

Thank you
To Theodore Kim and Jahaan Singh for the break from the news. You can reach the team at [email protected]

P.S.
• We’re listening to “The Daily.” Our latest episode is on the runoff elections in Georgia that will decide the control of the U.S. Senate.
• Here’s our Mini Crossword, and a clue: Yo-Yo Ma’s instrument (Five letters). You can find all our puzzles here.
• The Times print edition on Sunday, Dec. 13 includes the annual Puzzle Mania section. There’s a super mega crossword, as well as a meta contest with a grand prize of $1,000. Copies will be sold at our store at a later date.