Britain has had one of the world’s most successful Covid-19 responses in recent months.

Thanks to these moves, Covid has retreated more quickly in Britain than in almost any other country. Fewer than 10 Britons per day have been dying in recent weeks, down from 1,200 a day in late January. On a per-capita basis, Britain’s death rate last month was less than one-tenth the U.S. rate.

Despite this success, Britain is now coping with a rise in Covid cases. The main cause appears to be the highly infectious virus variant known as Delta, which was first detected in India. Britain’s recent moves to reopen society also probably play a role.

The increase is a reminder that progress against the pandemic — even extreme progress — does not equal ultimate victory. Britain’s experience also suggests that cases may soon rise in the U.S. “What we’re seeing in U.K. is very likely to show up in other Western countries soon,” The Financial Times’s John Burn-Murdoch wrote.

How bad is it?

Relative to where Britain was in January, the recent increase in Covid cases is tiny: 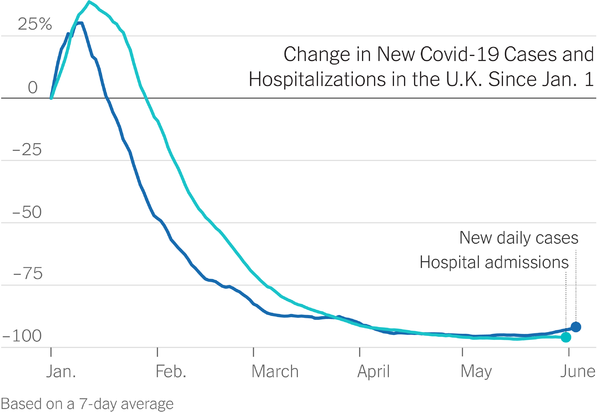 But there is still cause for concern. As small as it may look on that chart, new Covid cases have more than doubled over the past month, to more than 4,000 a day from about 2,000 a day.

Pandemics feed on themselves, in both directions. When new caseloads are falling, it increases the chances that they will continue to fall, because fewer newly infected people are able to spread the virus to others. When caseloads are rising, the opposite occurs.

With about 40 percent of Britons still having not received a vaccine shot, the recent increase has the potential to get significantly worse. The country is at a “pivotal moment,” as Dr. Chaand Nagpaul of the British Medical Association told the BBC.

Fortunately, the current surge is almost certain to cause less death than previous outbreaks, because most people vulnerable to serious illness have already been vaccinated. About 90 percent of Britons 65 and older have received both shots. And the vaccines continue to look effective against the Delta variant, researchers say.

For now, deaths have barely risen, and it’s possible that they will not rise much; the Covid death rate for people under 40 has been very low. But it is too soon to know. Covid death trends typically trail case trends by a few weeks. If the Delta variant ends up being significantly more severe, it could cause an increase in deaths.

“There are reasons to be hopeful — we’re not seeing a big trend in hospital admissions — but it’s early days,” James Naismith, who runs the Rosalind Franklin Institute, a research center, told The Times. “If we don’t see anything by June 14, we can exhale.”

British officials are debating whether to stick to their earlier plan to remove all activity restrictions on June 21 or push back that date.

One unknown about the vaccines is the ideal delay between the two shots (for those vaccines that require two, as most do). The U.S. staggers the shots by only a few weeks, while Britain has made people wait up to 12 weeks for the second one. Overall, Britain’s strategy appears to have worked better.

But the Delta variant is adding a wrinkle. Data suggests that it is more contagious than the original virus and more likely to infect people who have had only one shot.

I have noticed some confusion on social media and in news accounts about what this means. It does not necessarily mean that Britain’s strategy has been a mistake. Obviously, two shots are better than one for every version of the virus. Yet that’s not the choice countries face.

The choice they face is which to prioritize: first shots or second shots. Any dose given as a second shot is unavailable to be given as a first shot, and vice versa. The evidence continues to suggest that first shots make a bigger difference than second shots, including for the Delta variant, Jennifer Nuzzo, a Johns Hopkins epidemiologist, told me.

But the Delta variant does call for some changes in Britain, many scientists say. The country is accelerating second shots for vulnerable people. And people who have received only one shot should not behave as if they are vaccinated, said Devi Sridhar of the University of Edinburgh.

One, vaccines are still the most effective way, by far, to defeat this terrible pandemic. Nothing matters more than the speed at which shots go into arms — in Britain, in the U.S. and especially in poorer countries, where vaccination rates are still low.

Two, behavior restrictions can still play a role in the interim. If hospitalizations or deaths in Britain rise over the next two weeks, there will be a strong argument for pushing back the full reopening of activities. And that has obvious implications for the U.S., too. Restricting indoor activities for unvaccinated people is particularly important.

Three, caseloads are no longer as important a measure as they used to be. Before the vaccines were available, more cases inevitably meant more hospitalizations and deaths. Now, the connection is more uncertain. As a recent Times story put it, paraphrasing British scientists, “upticks in new infections are tolerable so long as the vast majority do not lead to serious illness or death.”

Over the next couple of weeks, I promise to to keep you updated on Britain and the Delta variant.

Senator Joe Manchin, Democrat of West Virginia, said he would not vote for a far-reaching voting rights bill, probably dooming it.

Europe has 5,400 offshore wind turbines. The U.S. has seven. Here’s what it’ll take to catch up.

An ICE program was supposed to disrupt international drug trafficking. Did it snare duped American seniors?

At least 32 people died after two trains collided in Pakistan, raising questions about the safety of rail travel there.

Prince Harry and Meghan, Duchess of Sussex, had their second child, Lilibet Diana.

Fisher-Price is recalling a baby sleep product, after it was linked to reports of four infant deaths.

There is a struggle inside the A.C.L.U. over whether to prioritize free speech or progressive principles.

The boxing match between Floyd Mayweather and Logan Paul yesterday ended without a winner.

“Those who paved the way for our joy”: Joan Steinau Lester explains in The Los Angeles Times how Supreme Court rulings legalizing interracial and same-sex marriage changed her life.

Big money: How an e-sports team got $210 million to change its name.

A Times classic: Your questions about climate change, answered.

Lives Lived: Clarence Williams III won fame playing one of the three young undercover police officers on “The Mod Squad.” He died at 81.

An overlooked part of Dutch history

The Netherlands rarely grapples with its role in the global trade of enslaved people. A major museum in Amsterdam aims to change that, with the opening of “Slavery,” an exhibit about Dutch colonial history.

Slavery was forbidden in the Netherlands, but it was legal in Dutch colonies. Mostly through huge trading companies, the Dutch enslaved more than a million people. The exhibit at the Rijksmuseum, which opened on Saturday, presents this history through 10 true stories about merchants, abolitionists, enslaved people, those who bought them and others. It includes objects from the era, like Rembrandt portraits.

The Netherlands often celebrates its commercial history, and the exhibit tries to uncover a largely untold part of that past. It is “a small and late step in the recognition of the sorrow that was done to hundreds of thousands of people in several continents,” Tim Fraanje writes in Dutch Vice. — Claire Moses, a Morning writer

Defeat dry chicken breast with these techniques, and here’s a recipe for pineapple-marinated chicken.

Go behind the scenes of the Netflix fantasy series “Sweet Tooth,” which largely eschews C.G.I. in favor of inventive practical effects.

In praise of the classically trained actor Patrick Wilson, a scream king in horror movies like “Insidious” and “The Conjuring.”

The pangram from Friday’s Spelling Bee was pedagogy. Here is today’s puzzle — or you can play online.

P.S. The Times’s Well section wants to answer your questions about health and wellness. Ask them here.

Today’s episode of “The Daily” is about Benjamin Netanyahu. On the Book Review podcast, Francis Spufford talks about his new novel.