Good morning. High voter turnout was supposed to usher in a Democratic sweep. What happened? 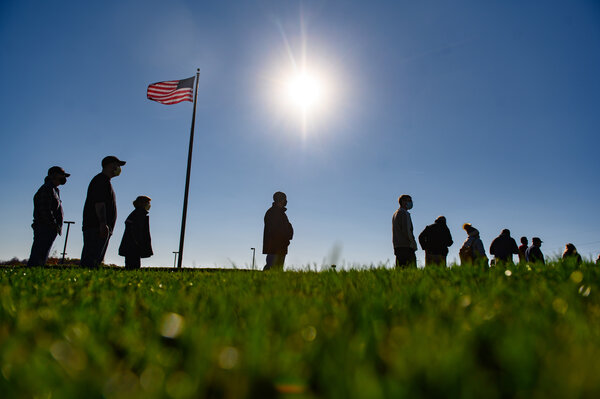 Americans under the age of 40 vote at relatively low rates. They also lean left politically. The same is true of Latinos and Asian-Americans.

This combination has helped feed a widespread belief that an increase in voter turnout would benefit Democrats. People ranging from Bernie Sanders to President Trump have made that claim. So have I: “The country’s real silent majority prefers Democrats,” I wrote in 2017.

I now think that’s at least partly wrong, and I want to explain today.

First, a little background: A decade ago, the journalist Dave Weigel — now a Washington Post reporter — introduced a concept he called pundit accountability. The idea was that journalists make a lot of analytical judgments and that we should occasionally revisit them to acknowledge what we got right and wrong. Doing so is a sign of respect to readers and can make us better at our jobs going forward.

Over the years, several journalists have picked up on Weigel’s idea, especially around the end of the year. I’m doing so with today’s newsletter.

I’ll start with the more pleasant side of accountability. In hindsight, I feel good about pieces explaining why Trump was unlikely to win re-election, why Democrats should hope Joe Biden would run for president and why the U.S. would struggle to contain the coronavirus.

I feel less good about largely writing off Biden after he lost New Hampshire and Iowa and about treating the 2020 polls credulously. The common thread: Politics is less predictable than we journalists sometimes imagine. I’ll try to do a better job of remembering that.

That idea also helps to explain the misperceptions on voter turnout. In 2020, turnout soared, yet Democrats did worse than expected. Yes, they defeated Trump, but they failed to retake the Senate (for now) and lost ground in the House and in state legislatures.

How could this be, when the big demographic groups with low voter turnout — Millennials, Latinos and Asian-Americans — lean left?

Because the infrequent voters in these groups are less liberal than the frequent voters. “Latino nonvoters, for example, seem to have a higher opinion of Trump than Latino voters,” Yanna Krupnikov, a political scientist at Stony Brook University, told me. Over all, nonvoters split roughly evenly between Democratic leaners and Republican ones, a recent Knight Foundation study found.

Once you think it through, the pattern makes some sense. It involves social class.

People who don’t vote (or who didn’t until 2020) are more likely to be working class — that is, not to have college degrees — than reliable voters, Knight concluded. And working-class Americans are more conservative on several big issues, including abortion, guns and immigration. They’re also less trusting of institutions and elites.

The fact that turnout surged this year and Democrats didn’t do as well as expected is yet another example of the party’s struggles with working-class voters, and not just working-class whites. Whether Democrats can figure out how to do better may be the biggest looming question about American politics.

Have you changed your mind about anything lately? Email us at [email protected] and put “mind change” in the subject line.

The Trump administration and Pfizer are nearing a deal in which the drug maker would produce at least tens of millions of additional vaccine doses next year in exchange for better access to manufacturing supplies.

Dr. Anthony Fauci received Moderna’s vaccine in public, calling it “a symbol to the rest of the country that I feel extreme confidence in the safety and the efficacy of this vaccine.”

Rail, air and sea routes between Britain and France are open again. The closing of the border, to limit the spread of a new virus variant found in Britain, had left more than 1,500 trucks stranded.

Fewer homeless people across the U.S. have contracted the virus than experts feared. Isolation and a lack of indoor shelter appear to have played roles.

As a second virus wave hit Europe this fall, our photographers captured medical workers who have been fighting to contain the crisis.

Trump railed against the $900 billion stimulus deal in a video posted online, calling the measure a “disgrace” and demanding changes, including payouts to Americans of $2,000 instead of $600. Afterward, House Speaker Nancy Pelosi tweeted, “Democrats are ready to bring this to the Floor this week by unanimous consent. Let’s do it!”

Trump issued 20 pardons and commutations, including to two people who pleaded guilty in the special counsel’s Russia inquiry and to four Blackwater guards convicted in connection with the killing of Iraqi civilians.

President-elect Joe Biden picked Miguel Cardona as his nominee for education secretary. Cardona has emerged as an urgent voice pressing to reopen schools safely during the pandemic.

Biden criticized the Trump administration for not being more transparent about an apparent Russian hacking of the U.S. government. “The Defense Department won’t even brief us on many things,” Biden said.

Israel will hold its fourth election in two years. The country’s Parliament dissolved itself last night after missing a deadline to approve a budget.

The Washington Football Team paid a female former employee $1.6 million to settle a sexual misconduct claim against the team owner, Daniel Snyder, in 2009, The Washington Post reports. It is the latest in a string of misconduct accusations against team officials.

The N.B.A. season started last night. Unlike the end of last season, it will not take place in a bubble in Florida, but in teams’ home arenas.

Each December, The Times Magazine celebrates some of the notable people who died during the year, in an issue called The Lives They Lived. The latest one is out this morning and includes:

Chadwick Boseman, the actor who built his career portraying giants of American history.

Mimi Jones, a civil rights activist known for her participation in the 1964 St. Augustine swim-in.

Tom Seaver, the greatest New York Met of all time.

Cecilia Chiang, who escaped war in China and shaped Chinese food in the U.S., with a little help from Henry Kissinger.

Over the past two years, Spotify has tried to become the go-to place for podcasts as well as music.

In May, the company struck a deal reportedly worth more than $100 million with the popular podcaster Joe Rogan. Spotify has also signed exclusive deals with the Obamas, Kim Kardashian West and Prince Harry and his wife, Meghan. And it has bought high-profile podcasting companies, including Gimlet Media — the maker of “Crimetown” and “Reply All” — and The Ringer, which focuses on sports and pop culture.

Why is Spotify so invested in podcasts? It sees them as an opportunity to make more money from advertising than music alone allows. Podcasts let advertisers “have a more intimate relationship with the user,” a Spotify executive told CNBC, adding that advertisers also like the user data that the company tracks.

Deals with stars like Rogan are another draw for advertisers, one analyst told The Times: “Spotify is buying not only Joe Rogan’s extensive and future content library, but also his loyal audience.”

This creamy noodle dish will win over vegans and nonvegans.

Looking to fall in love with Mozart, opera or the piano? Five minutes of listening is all it will take, and this list is a great place to start.

Read this interview with the actress Carey Mulligan, who delivered the performance of her career in “Promising Young Woman,” an upcoming dark comedy about consent and revenge.

Scooby Snacks, Everlasting Gobstoppers, Burple Nurples: The Times’s arts critic Maya Phillips wrote an ode to the sweets “dreamed up in the fictional worlds of TV and movies, summoned from the imagination like Peter Pan’s multicolored pies.”

The pangram from yesterday’s Spelling Bee was moonwalk. Today’s puzzle is above — or you can play online if you have a Games subscription.

Here’s today’s Mini Crossword, and a clue: The elf in “Elf” (five letters).

P.S. The word “vaxications” — vacations some people expect to book after the pandemic — appeared for the first time in The Times yesterday, as noted by the Twitter bot @NYT_first_said.

Today’s episode of “The Daily” is about the year in good news.

Lalena Fisher, Claire Moses, Ian Prasad Philbrick and Sanam Yar contributed to The Morning. You can reach the team at [email protected].