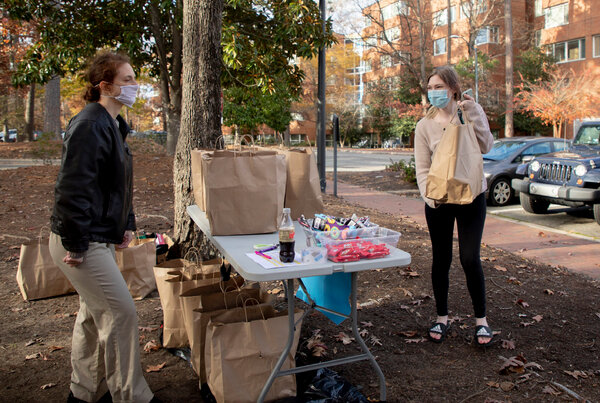 Re “Some Colleges Plan for More Students in Spring” (news article, Dec. 7):

As a faculty member at the University of Florida (my office is in the building pictured in the article), I was happy to see coverage of this topic. Yes, administrators base the success of their back-to-school initiative on testing, tracing, masking, distancing and student obedience. Unfortunately, as we have learned this fall, all too often this is not happening.

Here at the University of Florida, Covid cases have boomed (over 5,500 positive tests since March), testing has been optional, social distancing doesn’t always happen, tracing is imperfect and hundreds of students can be found in large groups at bars and restaurants every week.

Our students are getting sick. They will bring this into the classroom. Putting faculty in the classroom with students on a regular basis will not end well.

Colleges and universities often fail to adequately consider the impact on the surrounding community of their decision to introduce a large student population from hot spots throughout the United States and the world.

Here in Morningside Heights, Columbia University in August wisely reversed a decision to bring thousands of students back to a dense low- and moderate-income community that had been ravaged by the initial surge of the coronavirus in the spring. This reversal saved lives.

However, Columbia, like so many other colleges and universities, recently announced plans for a significant increase in the number of students returning in January, even as the virus surges to record levels throughout the country.

Citing low numbers of students and university-affiliated people testing positive, they ignore the rapidly increasing positivity rate in the neighborhoods surrounding their campuses, which include a large population of elderly residents and people of color, who are especially vulnerable to the effects of the virus.

Colleges must wait till the fall, when a critical mass of the population will hopefully be vaccinated, to bring students back in large numbers.

David Robinson
New York
The writer is a member of the executive committee of the Morningside Heights Community Coalition.

In “Rohingya Refugees Are Moved From Bangladesh Camps to Remote Island” (news article, Dec. 5), human rights activists can’t say they were surprised by Bangladeshi resettlement of Rohingya, yet the news brings with it dismal finality.

Naval boats are being used to transport nearly 100,000 Rohingya Muslims to Bhasan Char, part of the Bangladeshi government’s plan to ease crowding in refugee camps where more than a million have lived since fleeing Myanmar’s systematic persecution.

Executing such a task is not only shortsighted, but it again tramples on the fundamental human rights of people abused by the authorities over and over.

Bangladesh must stop further relocation until an independent technical and protection assessment is in place and refugees’ informed and free consent obtained.

Access to Bhasan Char should be given to United Nations agencies for assessment and continuous support in the camps, ensuring that conditions are safe and that those who reside there want to be there.

Such preconditions for any relocation should not only be met, but also demanded by the international community. The onus should be on pushing Myanmar to recognize Rohingya as full citizens and ensure the safe return to their country.

Re “In Global First, Lab-Grown Meat Is Approved for Sale in Singapore” (Business, Dec. 3):

We should celebrate Singapore’s recent approval of Eat Just’s real meat grown from animal cells rather than animal slaughter.

Raising billions of animals for food requires large amounts of land, water, greenhouse gas emissions and animal cruelty. Since humanity is now learning how to safely produce the same meat with vastly fewer resources and without so much animal suffering, why wouldn’t we?

Perhaps one day humanity will be shocked by how past generations treated animals on factory farms, and they’ll be grateful that we figured out how to divorce meat production from such a flawed system.

Paul Shapiro
Sacramento
The writer is the author of “Clean Meat: How Growing Meat Without Animals Will Revolutionize Dinner and the World.”