Early in the 20th century, it was not uncommon for children to suffer the agonies of infectious diseases or witness family members who did. Children got terribly sick and died at home. Their survivors — including some of our grandparents and great-grandparents — were intimately acquainted with the sights, sounds and smells of dying and with the deaths of siblings or their own small children.

Thankfully, those traumatic experiences are long past us. Americans born after the mid-20th century belong to the vaccine-spoiled generations. Most probably don’t know what diphtheria is or that it was a leading cause of childhood death in the United States before immunizations became widespread. Nor can they imagine being parents helplessly watching their small child cough to death from this bacterial infection.

I came to this understanding while writing a short book about the Covid-19 pandemic. As I studied the politics and science of our national response, I became interested in how we came to forget our vulnerability and even disregard or grow suspicious of the vaccines that have saved countless lives. At the end of March, as we celebrated the medical milestone of the new mRNA vaccines — which instruct our cells how to make proteins that prompt an immune response against a virus — one in four Americans said they would decline the Covid-19 vaccines.

The history of 20th-century vaccine developments was a seesaw of advances in medical science and distrust and conspiracy theories arising from vaccine mishaps or failures. New vaccines were almost always accompanied by reports of risks and side effects, and sometimes there were terrible accidents, at least one involving tens of thousands of people made ill by a vaccine that was supposed to protect them.

Still, vaccines have mostly eradicated many of the diseases that once plagued Americans. Children in the United States are now jabbed with some 15 vaccines that protect against diseases such as hepatitis B, measles, mumps, rubella, diphtheria, tetanus and pertussis.

Because of this success, Americans today are among the most medically protected populations in human history. And that protection has made us both complacent and risk-averse.

Even so, about 40 percent of American adults are obese, many with underlying health conditions related to obesity, and the infant mortality rate, which has been falling for decades, is still higher than the rate in many advanced economies. In 2009 a group of retired military leaders estimated that more than half of young Americans would be unable to serve in the military because they exceeded weight limits or had health problems. And after steadily increasing for most of our nation’s history, the life expectancy of Americans declined in recent years.

But in the winter of 2020, as Covid-19 was leaking out of China, onto airplanes and cruise ships and into Washington and California, American complacency was such that even many experts believed that the United States would elude the pandemic.

This coincided with antipathy among a sector of Americans toward science and experts. For decades, various industries and their handmaidens in politics had been denying scientific facts to maximize unregulated profit-making — the sugar industry’s fight with science over obesity, for example, the tobacco industry’s dismissals of the danger of smoking and the climate change denial movement.

Conspiracy theories and charges of fake news during the 2016 election cycle and the years that followed highlighted and promoted distrust in experts. “Make America great again” is essentially the notion that if something was good enough for Gramps, it’s good enough for me. Among this crowd, good old common sense and growing resentment replaced respect for those with Ph. Ds. 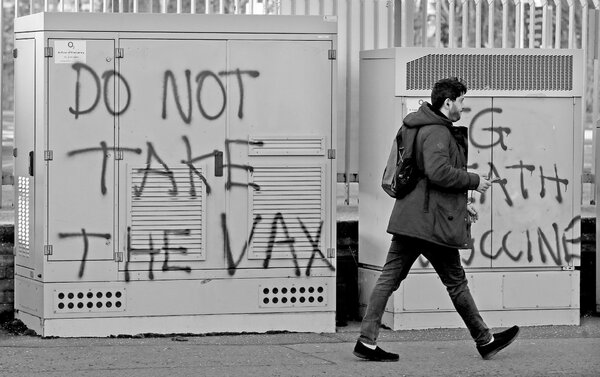 I believe one reason for this vaccine hesitancy is what I call Cold War bad science. The effects of open-air nuclear weapons tests, mind-control experiments by the C.I.A. on unwitting victims, the secret goings-on at Area 51 in the Nevada desert and the clandestine development of bioweapons at an Army base in Maryland help explain why so many Americans are willing to believe conspiracy theories and mistrust the official story.

Now comes a contagion that has spread worldwide and that we are witnessing in real time, from New York to Rio de Janeiro, London and Mumbai. The pandemic has forced us to come to terms with what science enabled us to forget: suffering on a scale that has touched most of us in one way or another, with more than 163 million people sickened worldwide and at least 3.3 million dead.

At the same time, we have benefited from the remarkable success of the speed-record development and deployment of vaccines that have saved innumerable lives and allowed the nation, finally, to begin to recover.

I am optimistic that this shared experience will increase trust in vaccines and in the man-made, not God-sent, miracles of medical science.

Nina Burleigh is the author of “Virus: Vaccinations, the C.D.C. and the Hijacking of America’s Response to the Pandemic,” published May 18.