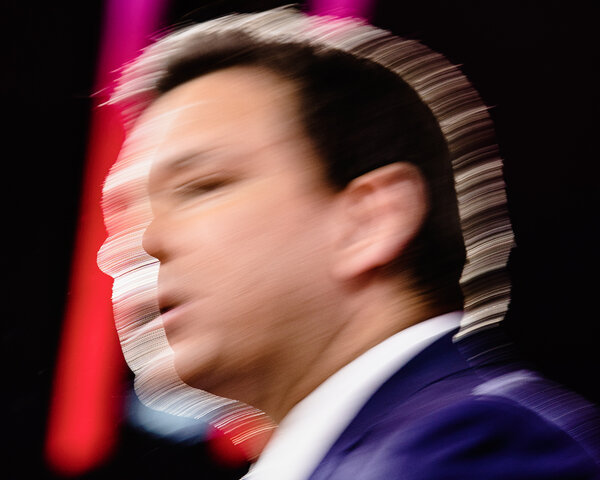 Ron DeSantis, the Republican governor of Florida, likes to do stunts. It is a key part of how he’s built his reputation as a fighter for conservative causes — a reputation he hopes to ride to the White House.

We saw one of those stunts this week when, using a promise of assistance, he lured several dozen Venezuelan asylum seekers onto a pair of planes in Texas and sent them to Martha’s Vineyard. According to NPR, “The migrants said a woman they identified as ‘Perla’ approached them outside the shelter and lured them into boarding the plane, saying they would be flown to Boston where they could get expedited work papers.”

The conceit of this dehumanizing bit of political theater was that the liberal denizens of Martha’s Vineyard would reject the migrants out of hypocrisy, thus proving that Democrats aren’t actually interested in welcoming immigrants into their communities. To DeSantis and his amen corner, asylum seekers are disposable, and they believe that liberals will want to dispose of them too.

What happened, instead, was that residents of Martha’s Vineyard rallied to provide food, shelter, clothing and services. The asylum seekers are now on their way to Cape Cod, to receive further assistance. The stunt failed to make its intended point.

The same was true of a previous stunt, in which DeSantis touted the arrests of 20 former felons for election fraud. The intended message was that Florida, and presumably the entire country, needed to be on constant alert to block fraudulent voters. But in the days and weeks after the arrests, an investigation by The Tampa Bay Times found that the state had actually cleared those residents to vote. As far as they knew, they hadn’t broken the law. If anything, they had been entrapped as part of a scheme to make DeSantis a more attractive candidate for the 2024 Republican presidential nomination.

With his command of conservative media and his obvious attempts to mimic the style and mannerisms of Donald Trump (right down to the big suits and frequent hand gestures), DeSantis has made himself into something of an heir apparent to the former president, should Trump decline to run in the next election.

But I think these failed stunts tell us something important about DeSantis’s ability to succeed on the national stage.

In short, he’s not quite ready.

Yes, when viewed from the perspective of partisan media, DeSantis looks almost unstoppable. But to a typical person — someone who may have heard about these stunts but doesn’t know much about DeSantis otherwise — he looks a lot like a bully, someone willing to play high-stakes games with people’s lives for the sake of his own ego and advancement.

Well, you might say, Donald Trump is a bully, too. Yes, he is. But Donald Trump is also a lifelong celebrity with a public persona that is as much about “The Apprentice” and even “Home Alone 2” as it is about his political career. What’s more, Trump has the skills of a celebrity. He’s funny, he has stage presence, and he has a kind of natural charisma. He can be a bully in part because he can temper his cruelty and egoism with the performance of a clown or a showman. He can persuade an audience that he’s just kidding — that he doesn’t actually mean it.

Ron DeSantis cannot. He may be a more competent Trump in terms of his ability to use the levers of state to amass power, but he’s also meaner and more rigid, without the soft edges and eccentricity of the actual Donald Trump. DeSantis might be able to mimic Trump, in parts, but he does not have the temperament or personality to be another Trump.

This doesn’t mean that DeSantis cannot win the Republican presidential nomination or even the presidency; of course he can. What I think it means, however, is that his Trump 2.0 act might fail to reach the marginal voters who liked Donald Trump for his persona and performance more than for his positions or policies. It means that on a national stage, DeSantis might flop like one of his stunts.

And looking back at the last decade or so of Republican presidential contests, it would not be the first time that a vaunted conservative fighter fell flat on his face when he finally took a swing at prime time.

My Tuesday column was a look at the old idea that political democracy requires a certain amount of economic equality.

As a nation, the United States is committed to a creed of free market capitalism. But this belies a heritage of egalitarianism and economic equality in American political thought. Among the oldest and most potent strains of American thinking about democracy is the belief that free government cannot exist in tandem with mass immiseration and gross disparities of wealth and status.

The fact of the matter is that a decade of corporate cost-cutting, including smaller crews for longer trains, has placed railroad workers under incredible pressure. Not only are they unable to take time for emergencies or sudden illnesses, but they are almost always on call, with just a few hours’ notice before they have to take a shift. For them, the tight schedules and stiff punishments translate to strains on their finances, families and health.

Jared Clemons on inflation for The Forum.

Saurav Sarkar on the Starbucks union drive for Dissent magazine.

Makani Themba on the Jackson, Miss., water crisis for The Nation magazine.

Clare Malone on the American media’s obsession with the British royal family for The New Yorker.

Feedback If you’re enjoying what you’re reading, please consider recommending it to your friends. They can sign up here. If you want to share your thoughts on an item in this week’s newsletter or on the newsletter in general, please email me at [email protected] You can follow me on Twitter (@jbouie), Instagram and TikTok.

Photo of the Week

Just something I saw while walking around Charleston, S.C., earlier in the summer.

My son requested chicken tacos with guacamole for dinner this week, so this is what I whipped up. It is very easy and straightforward. If you want to make it a little more demanding, however, let me recommend that you take the time to make your own corn tortillas. It’s not difficult — you don’t even need a tortilla press — and it’s very rewarding. Any store-bought masa harina will work, but I am a fan of the heirloom masa from Masienda. It’s a little expensive but, I think, worth it. Recipe comes from Serious Eats.

2 cups of your favorite guacamole

Mix all ingredients for marinade together in a small bowl. Place chicken thighs in a large bowl and pour in marinade. Cover and place in refrigerator to marinate for at least 2 hours or as long as overnight.

Remove chicken from refrigerator while lighting the fire. Light one chimney full of charcoal. When all the charcoal is lit and covered with gray ash, pour out and spread the coals out evenly over the charcoal grate. Grill chicken until fully cooked and browned on both sides, about 4 to 5 minutes per side. Remove from grill and allow to rest for 5 minutes. Cut chicken into thin strips.

While chicken is resting, warm tortillas on grill until pliable, about 30 seconds to 1 minute per side. To assemble, spread a heaping spoonful of guacamole from the middle of each tortilla. Pile with chicken slices and serve.