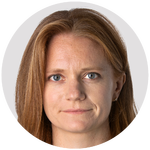 Ms. Miller is a staff writer and editor in Opinion.

What should we make of this year in America? There’s an argument that this is the end, or the beginning of the end, that the infrastructure of our democracy is crumbling, and that the jittery quality in the economy portends collapse and that the nuclear risk in Russia’s war in Ukraine could combust into something much bigger. There is, then, the counterargument that even with all these strains, we’re actually witnessing the system hold, that democracy prevails, that the danger is fading.

Those arguments can register as hysterical or dismissive or out of touch, but they can also be considered in the most openhearted, late-night kind of way. Maybe we really are on the verge of something even worse, as in large stretches of the 20th century, and this is how people felt in previous eras that you read about. Is the world as we knew it ending? Would you even know, until it was too late, until it was actually over?

In 2022, you could find the swings in discourse between apocalypse and dismissal, panic and caution, in politics, in the media, on Twitter and Instagram, over text, in person, within and between ideological factions, about war in Europe, about the state of American democracy, about illiberalism and the prospective retreat from globalism, about violence, about Covid, about artificial intelligence, about inflation and energy prices and crypto collapse contagion. There are deep versions of this debate, and reductive ones you catch a glimpse of in Instagram comments or in an op-ed that just gets it all wrong. This can even be a debate you have with yourself.

You probably know about the apocalyptic possibilities for American democracy. Fundamentally, this country doesn’t work if the peaceful transfer of power does not work. This country doesn’t work, and didn’t work in living memory, if people can’t vote. And there might be a threshold at which it doesn’t work if enough people don’t trust election results. Those existential questions have now been channeled into concrete problems: In 2022, people called up election offices and left death threats; people in tactical gear staked out voter drop boxes; election offices installed bulletproof glass. Republicans fielded candidates in Arizona and Pennsylvania who ran on the premise that elections in this country were a lie. Millions watched the Jan. 6 hearings that delved into how chaotic and fragile the final days of the Trump White House really were.

Then, in this fragile landscape of trust, there were the courts. In the summer, the Supreme Court fully overturned Roe v. Wade, a decision long expected, but one that still seemed to shock even the people who wanted it — even after the surreal publication of a drafted opinion in the spring. The fact that it really did happen — that suddenly a woman had to drive into another state to get an abortion so that she wouldn’t potentially die from complications — not only carried that kind of real-life consequence in a thousand private moments of people’s lives, but also opened up a world of other possibilities about what could happen. Maybe the court would roll back marriage equality. Or sign off on “independent state legislature” theory, an obscure theory adopted by a group of right-wingers that would grant expanded powers to state legislatures in carrying out elections and risk destabilizing the entire system.

Accompanying all these events was a disorienting, high-stakes discourse about how to talk about conspiracy theories and antidemocratic threats, and about how much to do so. We know that what people say — what we say — on social platforms, and certainly in the media, shapes the way people perceive politics, but in a way that can be hard to measure — an awareness that can convert every piece or post into an opportunity or mistake. Writers argued that excessively focusing on democracy might alienate, rather than persuade, voters, or even corrupt institutions by intertwining constitutional and partisan concerns.

Then there was the world beyond discourse, where no one could control much of anything beyond one man. For months, for years, since the 2014 annexation of Crimea and the West’s tepid response to it, people had warned that Vladimir Putin would eventually launch a full-scale invasion of Ukraine — then it happened. Not many people in Russia or anywhere else seemed to want this beyond Mr. Putin, but that did nothing to prevent Ukraine from becoming the kind of place where a boy has to figure out for himself that troops shot his mother and stepfather because nobody knows how to tell him, where people had to drink the water from radiators to stay alive, where reflecting on brutal deaths in one city, someone can find themselves grimly observing, “In theory, international bodies have the authority to prosecute war crimes wherever and whenever they occur.”