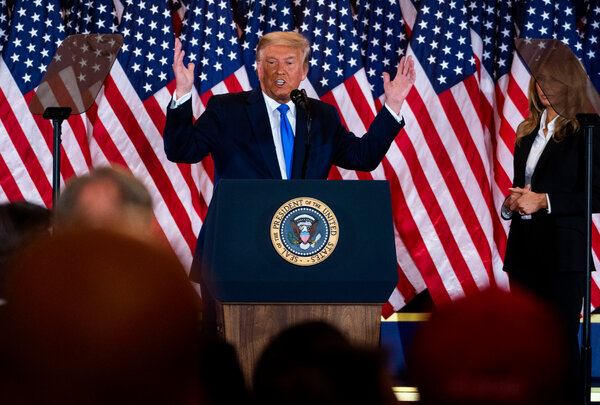 American democracy is now in such a precarious situation that this week the chairman of the Joint Chiefs of Staff had to issue an unusual reminder to the armed forces that they all took an oath to the Constitution and “not to a king or a queen, a tyrant or a dictator.”

Charles M. Blow’s comparison of President Trump to a 3-year-old reminds me of the question my mother would ask before removing a Band-Aid on a hurt knee: “How do you want it? Fast and painful, or slow and painful?”

It wasn’t much of a choice, because it would hurt me either way. At least I had a choice. Mr. Trump isn’t giving us a choice; he is taking the slow and painful course, and he’s impervious to the pain he is inflicting on the entire U.S. population.

Thank you for your service, President Trump. You may leave now.

I was greatly relieved when the election results rolled in, thinking that this was the end of our national nightmare. Apparently I must worry — endlessly — that he might run again.

Out of Prison in the Pandemic

Re “Tears, Hugs and Change of Clothes for Former Inmates” (news article, Nov. 6):

It is moving to read about family members and service organizations embracing citizens returning from prison in New Jersey. It would be a mistake, however, to infer that transitioning back into the community after a prison term is all about hugs, a cozy bed and new clothes. Compared with the general population, even before Covid, formerly incarcerated citizens were almost 10 times more likely to be homeless. For Black women, the disparity is even greater.

The unemployment rate of returning citizens is five times higher than for the general public, and substantially higher than during the Great Depression. The highest rate, and greatest disparity, in unemployment is, again, among Black women.

A few heartwarming stories should not encourage us to believe that a problem has been solved. Indeed, across the country, the challenges facing returning citizens can be expected to multiply in the Covid world.

Jane Lang
Washington
The writer is chair of the Eugene M. Lang Foundation, which funds, among others, groups that assist former inmates.

“No President Can Solve Our Deepest Problems,” by Yuval Levin (Op-Ed, Nov. 4), struck a chord with me.

I believe that I must look at what I can do as an individual to lessen fear and replace it with faith in myself and others. It doesn’t take much. A smile at a stranger. A kind word. Putting my beliefs into action on an individual and a community basis.

During 2020, I have experienced anguish at the fear I see in faces. I feel the deep sadness of those who have lost jobs, said goodbye to loved ones, who have fought for their lives, took to the streets to proclaim their right to be acknowledged. It’s said that compassion is learning to walk in the shoes of another. By doing so I can see what I didn’t see before. It is humbling.

Everyone in America is in fear. It is up to me to bring light into my daily interactions with others to counteract the fear.