The killing of the 33-year-old marketing executive, who disappeared while walking home through a busy London borough on March 3 and whose remains were found a week later some 50 miles away, set off an extraordinary outpouring of grief and anger.

She joins the tragic company of murdered British women — among them Milly Dowler, Joy Morgan, Suzy Lamplugh, Rachel Nickell — in a country where over the past 10 years, on average, a woman is killed by a man every three days.

That tells a terrible story of sexism, misogyny and patriarchal violence. But the killing of Ms. Everard — suspected to be at the hands of a serving police officer — has exposed a deadly truth. In Britain, those entrusted to protect women from violence are actually enacting it. And the government’s response is to give them more power.

Perhaps Wayne Couzens, the police officer accused of Ms. Everard’s murder, could have been written off as a “bad apple.” But after Saturday, the police can have no such excuse.

On Clapham Common, the park close to where Ms. Everard disappeared, hundreds of women showed up to pay their respects at a vigil the authorities had banned on the grounds that it violated coronavirus restrictions. The gathering was peaceful, until suddenly it wasn’t. Night fell and the police moved in, body slamming young women to the ground in pictures that appeared on the front page of many national newspapers the next day.

The brutality was shocking, but it was consistent with the police’s record of gender-based violence. The evidence is stark: Between 2012 and 2018, a total of 562 officers in the Metropolitan Police were accused of sexual assault — but only 43 of them faced any disciplinary action. 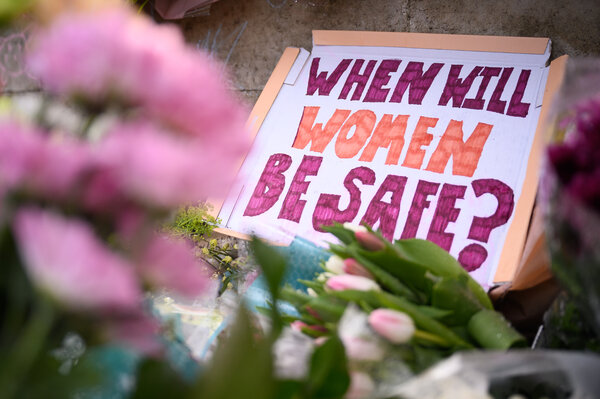 Similarly, police officers accused of domestic abuse are often shielded from punishment: Between 2015 and 2018 in England and Wales, fewer than 3.9 percent of allegations against police officers ended in convictions compared with 6.2 percent of such allegations in the general population. In June, in grotesque demonstration of a widespread sense of impunity, two officers reportedly took selfies with the bodies of murdered women.

In Ms. Everard’s case — from the officer guarding her remains who shared an “offensive graphic” with colleagues to the refusal to investigate a report of indecent exposure after Saturday’s vigil — that institutional culture has been on full display.

Protesters haven’t been deterred. Since Saturday, demonstrations have been held daily in London, led by a British feminist collective, Sisters Uncut. Thousands have clumped together outside Police Headquarters and marched to Parliament and Trafalgar Square, two of the capital’s most famous emblems of power. In their sights are not just police officers but also the state, which underwrites and sanctions their violence.

As if to prove the point, the government, panicked by the unrest, has responded by calling for more stringent policing. Along with promising to recruit 20,000 more police officers, the government plans to station plainclothes officers in clubs and bars to protect women from harassment. And Britain’s home secretary, Priti Patel, is driving through legislation that would vastly expand police powers, including the right to curtail peaceful protest.

These measures have been met with outcry. The suggestion of remedying a murder likely committed by a police officer with more, further empowered officers has been rightly rejected by much of the general public.

Threads left dangling for so long are finally being pulled together, revealing the bloody tapestry of violence endured by women. It feels as though many at last recognize the institutional nature of that violence. You cannot weed out the “bad apples” when the entire system is what causes the rot.

Now, perhaps, we can talk frankly about patriarchal violence. It’s more than physical acts of violence; it’s also the economic and psychological violence that keeps women subjugated through financial inequality, job insecurity, health inequity and the climate of fear that surrounds women as we engage in acts as simple as strolling home at dusk.

We can see patriarchal violence in the murder of Naomi Hersi, a trans woman denied dignity even in death. It’s present in the police raids on sex workers, often migrant women, who are then supposedly “liberated” from the shackles of their profession through swift deportation. It’s there in the slow, horrific death in 1993 of Joy Gardner, detained by immigration officials, her head wrapped in 13 feet of surgical tape.

Patriarchal violence is the looming threat by which women are controlled and constrained. For those who do not comply with the boundaries they are set — whether by rejecting gender binaries and mainstream ideas of sexuality or simply by not being white and middle class — the response is always one of violence.

But the killing of Sarah Everard — who, we are repeatedly told, did everything “right” — and the violent crackdown on those who mourned her has finally made it clear to a much wider audience that patriarchal, state-sponsored violence will never be satisfied with harming only women on the fringes.

It’s a realization decades in the making, but a collective light seems to have clicked on in the minds of British women. We must hope that it will, finally, guide us safely home.

Moya Lothian-McLean (@mlothianmclean) is the politics editor at gal-dem magazine and a freelance journalist.