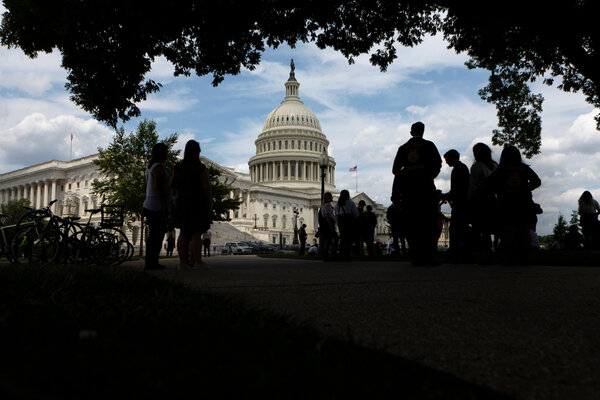 Kyrsten Sinema willing, Democrats appear to be on the verge of passing the Inflation Reduction Act — a bill that probably would, indeed, reduce inflation but is mainly a desperately needed effort to limit climate change. Republicans are, of course, attacking the legislation.

But when I look at the substance of those attacks, such as it is, I can’t help feeling more cheerful than I have in months.

For one thing, the debate over the proposal feels like a return to a more innocent time, when Republicans tried to make their case with dishonest claims about economic policy — not insane conspiracy theories and attempts to overthrow democracy.

For another, the G.O.P. critique of the bill is extraordinarily lame. And that’s a good omen for Democrats’ new approach to climate policy — one that relies mainly on carrots rather than sticks, on incentives to do the right thing rather than penalties for doing the wrong thing. We’re already seeing just how hard it is for Republicans to attack this approach, and it will get even harder once the public starts to see the benefits of environmental investments.

So, about that critique. The act calls for $369 billion in climate spending, mainly tax credits for families and businesses that adopt clean-energy technologies, improve energy efficiency, and so on. It would also spend $64 billion on extending subsidies that help keep health insurance affordable.

This new spending would be fully paid for, and then some, mainly by cracking down on tax avoidance and evasion. The biggest revenue source is to be a new minimum tax on large corporations. The legislation would also give a desperately underfunded Internal Revenue Service more resources to crack down on tax cheats. And it would seek to save Medicare money by giving the program the power to negotiate over drug prices.

How can Republicans attack such a bill? They can’t openly defend the interests of tax evaders and avoiders, although their long-term efforts to starve the I.R.S. of resources show that in practice they are pro-tax cheater. What they have done, instead, is claim — citing an estimate from Congress’s nonpartisan Joint Committee on Taxation — that the legislation would raise taxes on the middle class and that this violates one of Joe Biden’s campaign pledges.

What the J.C.T. projects instead are “distributional effects,” an attempt to estimate the indirect burden on families resulting from other taxes, which in this case essentially means the possible effect on wages of requiring large corporations to pay a minimal amount of tax.

Estimating these effects is useful, but are they a “tax increase” on workers? Almost any government policy will have an adverse effect on the income of someone, somewhere; is everything the government does a tax increase?