On the fourth floor at Children’s National Medical Center in Washington, D.C., one of the women in Vitals calls my 11-year-old daughter “TikTok.” As in, “Hey, TikTok, what’s happening today?” Then she asks her to get on the scale. It is disarmingly kind, this casual nod to life beyond oncology.

My daughter’s name is Orli.

On most Tuesday afternoons over the last several months, Orli has made TikTok dance tutorials in a studio at the hospital, which beams programming into upstairs patient rooms. She likes to rope in a good-natured certified child life specialist named Joe, and the women who run the studio, Becca and Nichole, with whom Orli seems happier than she is with anyone else in the world right now. 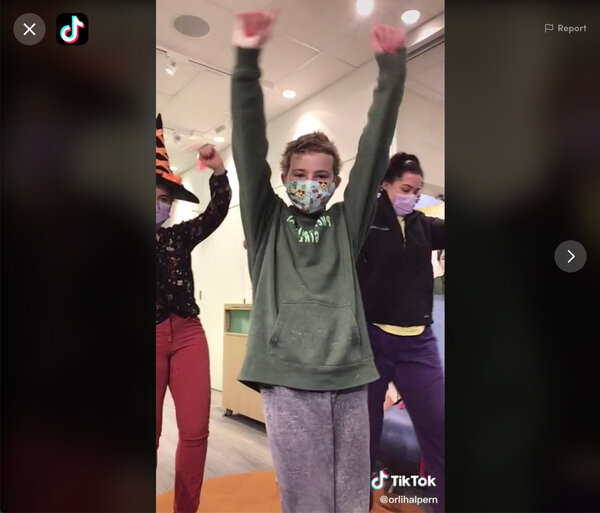 When Orli was admitted into the hospital again last month, for a painful lung resection to remove a cancerous nodule, Joe, Becca and Nichole threw her a milkshake party. This is no small thing. Not much socializing happens on inpatient units these days. Covid-19 has dulled hospital life, as it has so much else.

TikTok has been our unlikely salvation. As our cancer-narrowed lives were squeezed further in lockdown, the platform became a lifeline, a community. It allowed Orli to control her story; it kept her moving.

Orli joined TikTok last January, a month into her treatment for rare liver cancer. She was newly bald and fully isolated. My partner, Ian, was amused by her new hobby; I was not thrilled. She seemed far too exposed; I once hesitated to put our kids’ faces on Instagram. But the early days of cancer were impossible. Resistance to social media seemed ludicrous, like quibbling over PG-13 movies when life itself was obscene.

Soon, Orli and her younger sister, Hana, were filming themselves daily. I made them lock the account.

Except for seven weeks in Massachusetts in the spring, when Orli received a liver transplant from a team at Boston Children’s Hospital, she has spent over a year of Tuesdays in the fourth-floor oncology clinic at Children’s National Medical Center. We have seen her through seven rounds of chemo, around 65 days in the hospital, a stint in the I.C.U., an emaciated season when my 5-foot-1 girl hovered around 80 pounds, plagued by nausea and exhausted by low blood counts. Through surgeries, and bag after bag of intravenous fluids flowing into a tube in her chest hooked up at home to an IV pole hanging perilously close to her bedroom ceiling fan, and, of course, through our fragile pandemic isolation, Orli documented it all in 60-second TikToks.

Far worse than the extended screen time were the moments she didn’t share, when she was too frustrated, in too much pain or too enervated to post anything at all. Those days, we’d all but beg her to create something, and she would refuse.

We now have a flip-book of a grueling year, a documentary of illness and recovery, persistence, silliness and, yes, even joy. Scrolling back to Orli’s earliest TikTok videos, when her cancer was new and her belly still visibly swollen with tumor, she appears skeletally thin, her eyes huge, her face pale and wan. By June there is the occasional masked, distanced friend outdoors; in August she recorded a visit with tested and quarantined cousins who were permitted to briefly shed their masks. There is even the inevitable pandemic puppy, in our case a Labradoodle rescue dog who loathes outsiders with a passion mitigated only by the fact that outsiders rarely come near. Eventually, we see all the boredom of every other non-ill child in the pandemic.

Orli used TikTok to engage her hospital world. She taught her transplant surgeon the Renegade two weeks after he spent 14 hours removing her perfidious liver. Whole phalanxes of nurses and assorted hospital technicians performed viral dances with her. She picked up camera tricks, transitions and voice-overs and sophisticated cuts. In the spring, she appealed to people to stay home for the vulnerable, for her. She created choreography. Her dancing grew crisp and fast.

In June, Orli flipped her account to public and suddenly picked up over 25,000 followers. She was overjoyed. I hated it. I worried about trolls and responsibility. We decided she would have to show me each video, before posting it. We fell down on that rule. I feared she would sink under the terrible weight of social media’s dark side.

Then I started reading the comments. Kids were telling her how brave and strong she was, how impressed they were. Orli began narrating her cancer story in 45-second chats, responding to questions from her public. The result is a glimpse into how a middle schooler fathoms the unfathomable. “Yes, cancer hurts a lot,” she says in one clip she filmed in mid-June, responding to a comment. “I cannot explain to you how much pain I was in, right when I got diagnosed, throughout till I got my transplant.”

I sometimes hate the whole project. She worries far too much about getting her content exactly right and posting often enough. She stresses about responding immediately to comments. She has become just as overly attached to TikTok as I feared she would be.

And cancer has not spared her from casual cruelty. I took away her device after finding her distraught when someone accused her of leveraging her disease for some kind of fame. A handful of people have repeatedly questioned her gender, presumably because her hair remains short.

Mostly, though, the comments are encouraging. She meets other cancer-fighters, and people who lost a family member; she connects with people who have a parent or a grandparent battling illness. Some simply see her and Hana for what they are: regular kids rising to a remarkable challenge.

Much as I hate to admit it, TikTok is an essential bridge to the outside world across a divide begun by cancer, and widened by pandemic. It has helped build Orli’s confidence. Over time you can watch her on TikTok grow literally stronger, as she recovers. She branches out into talking about new subjects, including religion.

But that recent week in the hospital was a fresh blow; her walking was slow and pained as she curved her body like a C to protect her newest surgical wound. When she was released, she filmed her own homecoming, partly in the hospital and partly at home. She wrote the happy ending she wanted, with her sister ecstatic to see her again, the lunatic dog in the frame. Every time I see it my heart constricts.

In Orli’s most recent videos, her hair finally grown out from bald to a spiky bob and partly dyed magenta, she has morphed once again from patient back to kid, albeit a different one than the girl she was before this TikTok account existed. If we ever forget, as if we could, we can see the record. It’s all here, on the screen in the palm of my hand. Our heartbreak, our TikTok warrior.

Sarah Wildman is a staff editor in Opinion and the author of “Paper Love: Searching for the Girl My Grandfather Left Behind.”