Caring for others runs in the Williams family. Danielle Williams, 52, and her daughter, Brittany, 35, have spent their entire adult lives caring for others: doing the unpaid labor of tending to family members and looking after elderly and disabled adults in their jobs as home care workers.

Their work days are largely similar. Both mother and daughter rise early and make a lengthy commute — up to one hour by car for Danielle and up to two hours by bus for Brittany. They make their clients’ meals. They shop for groceries and clothes, pick up medicine, run to the post office. They care for pets. They dress and undress, change diapers and give baths. They assist with medication. They dust, vacuum and do the laundry. They talk and listen to the stories of their clients’ lives, often for hours.

But the similarities end there. Brittany makes nearly $20 an hour, usually working five days a week. But without child care for her 8-year-old son during the pandemic, she’s been working no more than four. She has paid time off, medical and dental insurance, a retirement plan and many other benefits. Danielle works seven days a week making half Brittany’s wage. She has no benefits through her job, qualifies for Medicaid and is barely able to survive.

These differences come down to where Brittany and Danielle live. Brittany lives in Washington State and belongs to a union of long-term-care workers, S.E.I.U. Local 775, that has worked with the state for better pay and working conditions. Danielle lives in Arkansas, where she has none of that. Across the nation, this pattern repeats itself: Home care aides in states where the work force has unionized and won the right to collectively bargain with the state have living wages and benefits, while those in states without unions have lower wages and minimal benefits — if any at all.

“It stresses me out a lot,” Danielle said. “I moved from Washington back to Arkansas because my mom needed help. I took a real big cutback. It was like diving into the deep end of a swimming pool when you can’t swim. You try to save yourself, but at the same time, you’re hurting yourself.” 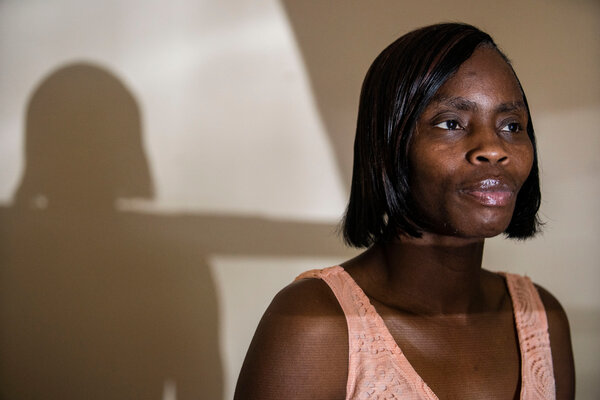 That could be about to change: In his address to Congress last month, President Biden highlighted the $400 billion he proposes to spend on home- and community-based services for older adults and people with disabilities. It’s part of his $2 trillion American Jobs Plan to shore up infrastructure. The plan, he said, could make all care jobs good jobs, with “better wages and better benefits,” no matter where workers happen to live.

For Danielle and other workers in states where home care aides are paid low wages, this once-in-a-generation investment could be transformational — a chance to earn more money and possibly to join a union that would fight for better conditions and training. The way things are now, after paying her monthly car loan, rent and phone bill, Danielle hardly has any money left over in her budget.

Home care jobs are projected to be among the fastest-growing jobs in the coming years, growing 34 percent by 2029, compared with a 7 percent average growth rate for jobs in other industries. This growth will be driven by the needs of America’s aging population: By some estimates, 70 percent of people over 65 will require long-term care. Already, 800,000 people in need of home care languish on Medicaid waiting lists.

Despite the demand for home care workers, wages are low: a median $11.52 an hour in 2018 (the average went up in 2020 because of temporary Covid-19 hazard pay increases). More than half of home care workers qualify for public benefits. And the people who make up the work force for these jobs are often vulnerable and marginalized: Nine in 10 home care workers are women and nearly two-thirds are people of color.

This profession of mostly women and women of color was left out of the Wagner Act in 1935 and the Fair Labor Standards Act in 1938 — exclusions that many scholars believe were designed to reinforce white supremacy and patriarchy. As a result, home care workers were denied the federal right to organize and collectively bargain, and the right to a minimum wage and overtime pay.

But in recent decades, home care workers have won important victories. In 2001, home care workers in Washington won the right to collectively bargain. One necessary tool for enabling independent providers to come together is designating an “employer of record.” Without one, each worker is simply an independent contractor, unable to force the state to negotiate.

According to Peter Nazzal, director of Long-term Care at Catholic Community Services of Western Washington, these changes have helped stabilize the care work force, where turnover is high. It’s also improved care for people by keeping them at home and lowered costs for the state. “It’s a fraction of the cost of nursing homes,” he said in a podcast interview last year. “Taxpayers like it.”

Other states, including Illinois, Minnesota and California, have formed some kind of home care authority to help families find care and ensure that independent workers have an employer of record. In states where workers can bargain for their wages with home care authorities, nearly all earn above $15 an hour or will in their current contracts.

In Arkansas, however, home care workers do not have the right to collectively bargain. They must accept the wages the state decides upon, and they do not have a voice in those negotiations. Danielle made $9 an hour when she moved to Arkansas in 2018. In January, when a voter-driven effort to raise the minimum wage kicked in, she began making $11 an hour

Although a coalition of progressive organizations worked to pass the ballot initiative to raise the minimum wage, with right-to-work Republicans firmly in control of the legislature and governorship, there is little hope of a union victory like that in Washington.

‘This isn’t a union state. You have to fend for yourself.’

The need for well-trained, well-paid home care workers has been particularly apparent during the Covid-19 pandemic. Mr. Nazzal said that, because the union bargained for free training — which includes infection control measures — Washington home care workers were well positioned to handle the coronavirus.

Home care workers there were already routinely practicing the hand-washing, glove-wearing, and disinfection and cleaning measures that the C.D.C. recommended at the start of the pandemic. Mr. Nazzal said they were also accustomed to wearing face masks and shields, and safely handling bodies and bodily fluids.

He said that at the start of the pandemic, “We simply sent a memo to all of our staff saying, ‘Remember what you were doing? Keep on doing it.’”

Brittany’s union then bargained with the state to provide personal protective equipment, higher hazard pay, and the ability to do paperwork and other tasks remotely.

As a result, Mr. Nazzal said, while Covid-related nursing home deaths make up about half of all the deaths from the virus in Washington State and nearly 40 percent of all Covid deaths in the United States, rates have been negligible among those in home care.

In Arkansas, Danielle worried about getting sick with Covid-19. She got a temporary spike in hazard pay, but had no access to protective gear.

“This isn’t a union state,” Danielle said. “You have to fend for yourself.”

This is why federal legislation like President Biden’s plan is so important. As Darrick Hamilton, the founding director of the Institute on Race and Political Economy at The New School, puts it, the current lack of federal oversight is “deeply unjust to care workers and rooted in sexism and racism.”

Mr. Biden’s plan isn’t perfect: It’s aimed at home care workers paid through Medicaid and does nothing to address the fact that many middle-class families need but can’t afford home care. Still, supporters of the plan argue that higher wages for workers paid through Medicaid would put upward pressure on wages throughout the industry — which would make a significant difference for workers like Danielle in states with low wages.

More details of the plan have yet to emerge. It’s possible that the federal government could create incentives to create more “employers of record” like Washington’s Home Care Quality Authority, which would also help workers in states that currently don’t have unions for home care aides.

Sometimes, Brittany urges her mother to move back to Washington.

“We are truly blessed here,” Brittany said. And she’s angry that others, like her mother, aren’t. “We need to be seen as the professionals we are,” said. “We are the maintainers of life.”

Brittany figures that with all of the experience Danielle has, she would be making around $30 an hour doing the same work in Washington. But Danielle moved to Arkansas to help her own mother. She thinks about how her mom cared for generations of their family, and she knows she can’t leave. At least not now.

Maybe, she thinks, things will change in the future if Mr. Biden’s plan passes. “I could see that helping us out,” she said. Perhaps not. But with bills to pay and pricey dental work she’s saving up to pay for out of pocket, all she can think about is today. How will she be able to support herself?

Brigid Schulte is the director of the Better Life Lab, a program at New America that focuses on family, work and gender, and the author of “Overwhelmed: Work, Love and Play When No One Has the Time.” Cassandra Robertson is a senior policy and research manager at New America. She was a postdoctoral fellow at the Cornell Population Center and holds a Ph.D. in sociology from Harvard.