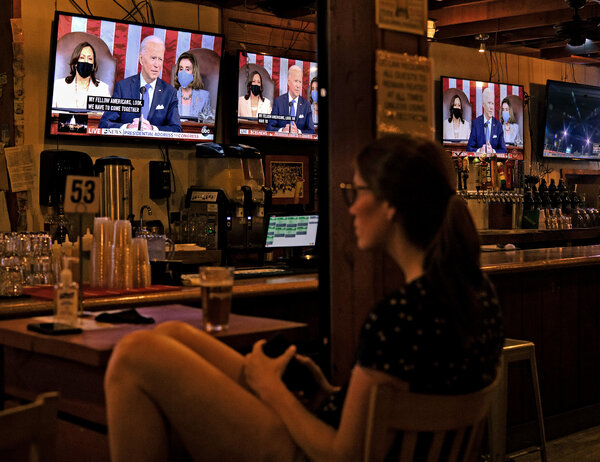 Re “The State of the Union Is Stressed,” by David Axelrod (Opinion guest essay, Feb. 16):

Mr. Axelrod’s advice is off-base, literally and figuratively. The Democratic base needs to be energized and mobilized, while the middle needs to be convinced that we’re moving in the right direction. Neither group is going to be inspired by a tepid State of the Union address about what’s been accomplished.

Yes, Mr. Biden can still appear empathetic in his address on Tuesday — it is his natural state — but he dare not dwell on problems, nor is it required. The pandemic is trending in the right direction (even if threats of other variants are out there); the economy is roaring (even if inflation needs to be addressed); respect has been, and continues to be, restored around the world (at a time when U.S. leadership is urgently needed).

If Mr. Biden and his administration don’t convey confidently that we are on the right track — which is a perfectly credible claim — why should we expect Americans to believe it is so?

This opinion piece put into words what I’ve been thinking for a long time: The Democratic Party needs to learn to make small meaningful gains that can stick rather than aim for sweeping reforms.

To use a sporting analogy, continuing to put a few points on the board while the clock keeps ticking may not be very sexy but it will often win the game.

In an increasingly divided nation, those who can make meaningful change on behalf of the average American (such change often being in the political center) will make real, if unsexy, progress for Americans and can help rebuild our economy. That progress, particularly during a pandemic, is what average Americans deserve from their politicians.

Alvin Bragg, Tell Us Why You May Drop the Trump Case

After less than two months in office it is reported that Manhattan’s district attorney, Alvin Bragg, has overridden the judgment of his senior staff and might not pursue the criminal investigation against the Trump organization and Donald Trump. Two assistant district attorneys heading the investigation, both of whom have been involved for many months and have special expertise in such matters, have resigned in protest.

While one should not make judgments from afar and without knowing all the facts, the decision by Mr. Bragg is startling and seems to fly in the face of mounting evidence that Mr. Trump and his company criminally gamed the system to reduce taxes and obtain bank loans.

The Manhattan D.A.’s office has long had a reputation for excellence and nonpartisanship. If that reputation is to be preserved, Mr. Bragg must speedily, and convincingly, explain the basis for his decision.

Re “Push to Move On From Covid Sharpens Pain of Those at Risk” (front page, Feb. 18):

As a pediatrician, I try to protect my patients by masking and being vaccinated. I was recently diagnosed with an autoimmune condition requiring immunosuppressants. I have been living in a “bubble,” having minimal contact with people outside my home.