In this new short film, an artist finds hope in an unlikely place — the city’s storefront gates, rolling up day after day.

A daily routine becomes a symbol of resilience for a New York artist.

“In 1992, I moved into a 275-square-foot fifth-floor walk-up on Seventh Street in the East Village. Back then, it was a place where a lot of young gay artists lived. I grew up on Long Island, and in high school I used to take the train into the city on weekends. I couldn’t believe that now I actually got to fall asleep in the city. 1992 was the year I went to a lot of clubs — really, my only year doing that — so I often found myself walking home really early in the morning just as shopkeepers in the neighborhood were throwing open their gates. I love the sound. How raw it was. And how every shopkeeper moved a little differently and had their own subtle flourishes. I was struck by the different ways this endlessly repeated everyday act could make me feel. Sometimes it was like, “Yes, a new day. A fresh start.” Other times there was, “This again.” I wanted to focus my art on moments that had that kind of overlooked power. “Excuse me.” So I spent about a month walking up and down First Avenue with my Hi8 camera early in the morning before biking up to my word-processing day job in Midtown — “Maybe don’t look at the camera” — asking shopkeepers if it was all right to tape them lifting their gates. The person at the place where I used to get pierogies asked if she could comb her hair first. I put it all together in a video art piece I called “Hallelujah Anyway, Number 2.” Back then, I was naming a lot of pieces “Hallelujah Anyway,” which is the title of a book of Kenneth Patchen poems. To me, “Hallelujah anyway” described and still describes my relationship to being alive, and especially to being alive in New York City. You know, life is hard and messy and fragile and always changing. And I give thanks for it. I lived in that apartment for 17 years, until 2009. The neighborhood changed. Some shops stuck around. Others didn’t. The community I was part of was devastated by AIDS. I’m still here. So many people I looked up to and loved aren’t. Now we’re in the middle of another health crisis, and I find myself thinking a lot about New York City in the early ’90s. I live a bit further down in the Lower East Side in a one-bedroom apartment I share with my husband. I still sometimes can’t believe I get to sleep here. Last spring during quarantine, we would throw open our window and clap at 7:00 PM along with everyone else. And every time I noticed at this one window across the courtyard a person waving a white handkerchief. I loved it and looked forward to it and recorded it night after night. Waving a white flag can mean surrender, but that’s not what I saw. To me, it was a gesture of gratitude and also a way of saying, “I’m here.” Another way of saying, “Hallelujah anyway.” [CLAPPING] 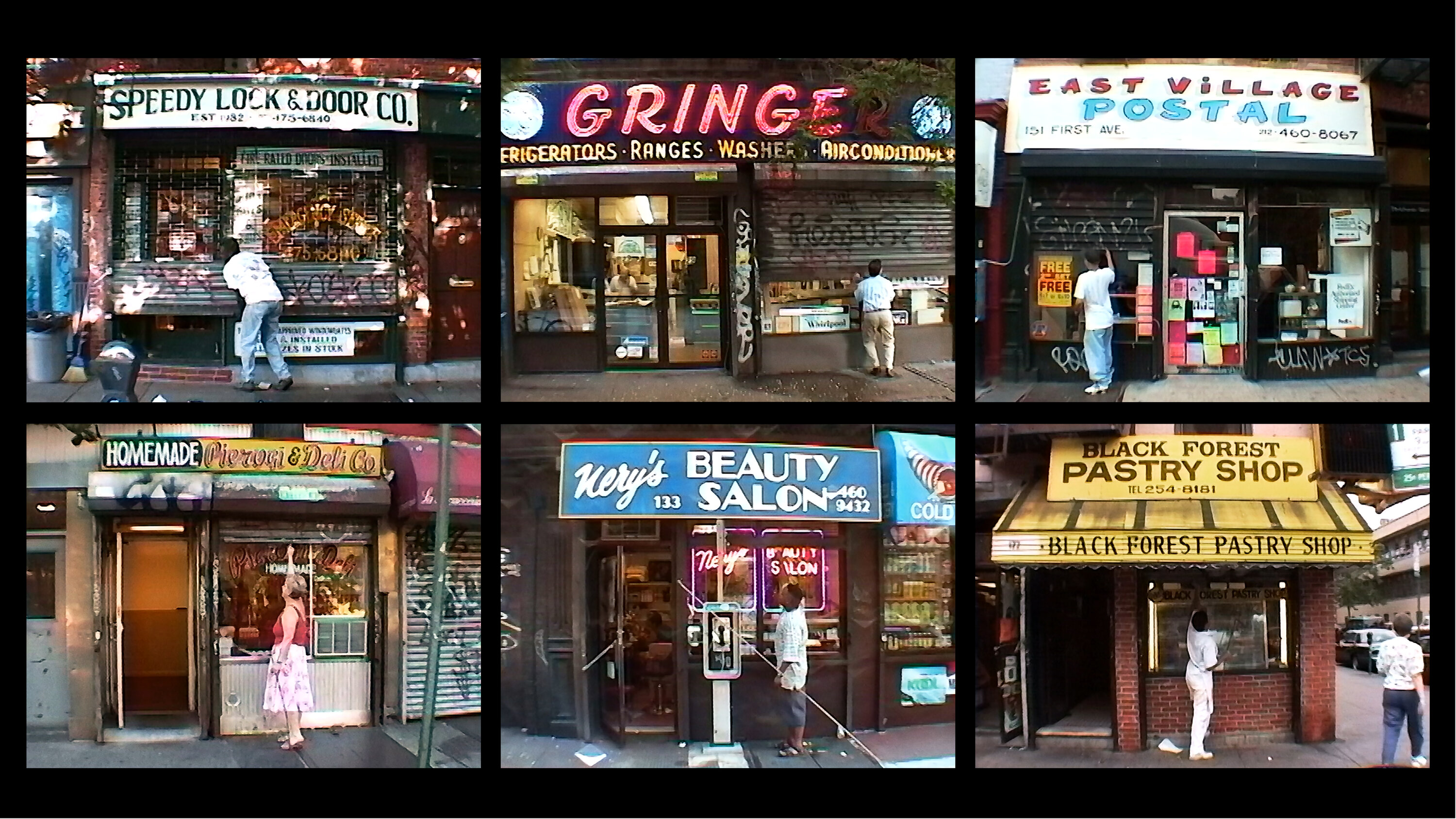 For almost three decades, I’ve been making visual art with New York City at its center. I’m especially drawn to everyday moments that, when you focus on them, have unexpected emotional power: the riveted expressions of lunchgoers scanning a salad bar, the split-second disorientation of commuters emerging from the subway onto the street. I work mostly in public, but I don’t know how to do that right now. So I find myself looking back on footage I shot in the past to try to make sense of the present. In the short documentary above, I revisited a video I shot in the early 1990s, of shopkeepers near my East Village apartment throwing open their gates in the morning, to reflect on the perpetual change and resilience that mark life in New York City.

Neil Goldberg is a visual artist and the host of the podcast “She’s a Talker.” His work has been exhibited at the Museum of Modern Art, the New Museum of Contemporary Art and the Museum of the City of New York.

The Times is committed to publishing a diversity of letters to the editor. We’d like to hear what you think about this or any of our articles. Here are some tips. And here's our email: [email protected].

Op-Docs is a forum for short, opinionated documentaries by independent filmmakers. Learn more about Op-Docs and how to submit to the series. Follow The New York Times Opinion section on Facebook, Twitter (@NYTopinion) and Instagram.