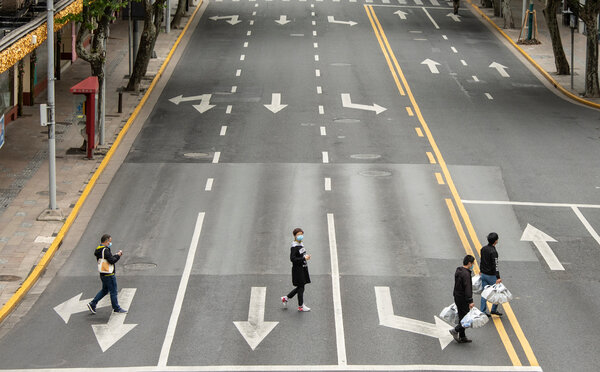 Ms. Rammeloo is Dutch journalist based in Shanghai.

SHANGHAI — For nearly three years, leaving my apartment involved a routine not unlike an aircraft pilot’s before takeoff. Mask: check. Anti-viral hand sanitizer: Check. Green code on my smartphone reflecting latest negative Covid test: Check. Courage to actually go outside and risk getting ensnared in an abrupt lockdown somewhere: Check.

And then, suddenly, China’s cumbersome “zero Covid” system and alarmist propaganda was gone. Almost overnight, a government that had only recently pledged to “unwaveringly stick” to its no-tolerance approach has swung to the other extreme, spinning the roulette wheel of public health and letting the virus rage among an anxious and utterly confused population.

For much of the pandemic, China was relatively safe. We dined, danced and worked with little risk of infection compared with the rest of the world. But we had our own fears of sudden harsh lockdowns, of ending up in a giant quarantine hall with a thousand beds, portable toilets and bright lights. At any moment, the mall where I shopped or the building where I worked could be locked down for days because of a suspected case. Word of a coming lockdown was enough to send workers and shoppers fleeing for the exits. Passing a restaurant in my Shanghai neighborhood once, I saw customers inside curling up against the window, trying to get comfortable so that they could sleep. I started taking my phone charger and toiletry bag everywhere.

In 2020, early in the pandemic, I sent my two young children back home to the Netherlands. I’ve shuttled back and forth since then, splitting my time between them and my work as a journalist in China. The all-too-brief family visits were weighted with the anxiety of staying Covid-free so that I would be allowed back into China. I spent almost three months of my life in re-entry quarantine in Chinese hotels.

Others, foreigners and Chinese alike, had it far worse. Many who had relatives overseas didn’t see them for months or even years because of tighter Chinese border controls. Travel restrictions, arbitrary citywide lockdowns and the economic damage caused people to lose jobs or businesses. Shanghai’s harsh two-month lockdown beginning in late March grabbed world attention because of food shortages, the mental toll on citizens, needless deaths as people couldn’t get to hospitals and pets brutally killed by health workers and the police. But it was hardly the only Chinese city to suffer.

Arriving in Shanghai in June, the day after it reopened, I could see the trauma on the faces around me. People stuffed their freezers with food in case of another lockdown and shuffled like zombies in lines for the frequent mandatory Covid testing. The city remained in the grip of the “dabai,” or “big whites” — the ubiquitous government health workers and police in their dreaded head-to-toe white P.P.E. suits, who jabbed swabs down throats or dragged people away to quarantine. It was difficult to imagine a person inside those white shapes who controlled everyone’s fate. I would look behind the plastic shields and the goggles, searching for a pair of eyes with a flicker of empathy. I usually failed. They were like robotic creatures out of a sci-fi movie. Only when I saw one running an errand on a scooter, or joking with a fellow dabai, did they briefly seem human.

It had long been clear that Covid variants like Omicron were more contagious but often less dangerous to many people. Yet China had no plan for exiting this mess even as Covid measures smothered the economy. Each day, I passed more boarded-up shops. A young dabai told me he had been trained as an engineer but the only job available was guarding quarantine facilities. The individual making sacrifices for the collective is a Communist Party mantra. But it didn’t hold up. Society was collectively suffering, and for what?

China’s leaders finally caved when fed-up citizens took to the streets in late November to say enough is enough. It worked. The government changed its tune so suddenly and completely that it left us feeling like the cartoon character who runs off a cliff but hangs in the air until he realizes he’s about to fall. The official line went from “unwaveringly stick” with “zero Covid” to, essentially, “you’re on your own.” Hundreds of millions of people, with little natural immunity, are now at risk of infection, many of them under-vaccinated older people. Covid-related deaths are increasing.

Until recently, much of my head space was devoted to keeping up with the latest regulations to avoid winding up in the clutches of the dabai. But you can’t just switch off a sense of dread that was constantly reinforced for so long. Authorities have relaxed testing requirements but, out of habit, I still sometimes stop by my local testing booth, one of the few that wasn’t hastily dismantled. The swab grazing my throat feels comforting and safe.

Of course, many are just happy that “zero Covid” is gone. A woman I spoke to in a village had endured three lockdowns this year alone. Now she was infected and visibly ill. But, she said, “Anything’s better than staying inside.”

The Chinese people’s willingness to comply with the often unreasonable and illogical Covid measures always struck me. A few would rant behind closed doors, but most bought into the propaganda of fear. The lengthy nationwide commitment to “zero Covid” wouldn’t have worked otherwise. Unsurprisingly, people are now just as eagerly latching onto the new official line that it is up to each person to stay virus-free and that for many healthy people it is just a bad flu.

After enduring so much anxiety and disruption to their lives for the goal of suppressing Covid, people in China are left to face the virus anyway, old fears merely replaced by new ones. Besides masks and antiseptics, they now scramble for painkillers and flu medications, bracing for the growing Covid wave. Maybe it will take mercifully few lives. Maybe many will die. In either case, what were the past three years of effort and sacrifice for?