President Biden wants to change the trajectory of the country. He’s off to a good start.

Mr. Alter is a journalist and the author of “The Defining Moment: FDR’s Hundred Days and the Triumph of Hope.” 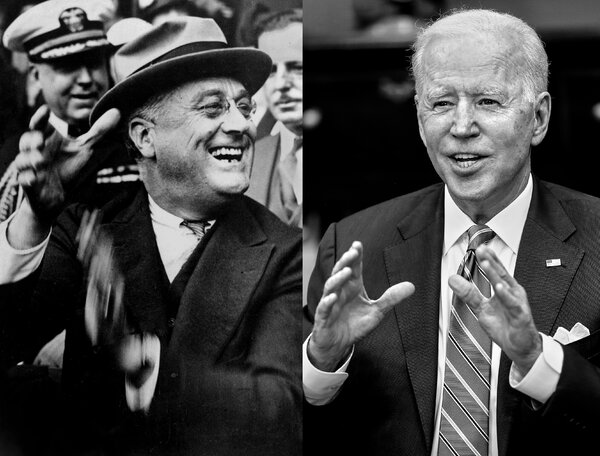 “History doesn’t repeat itself, but it sometimes rhymes,” Mark Twain (supposedly) said. If so, Franklin Delano Roosevelt and Joseph Robinette Biden Jr. could be a couplet. With a few breaks and the skillful execution of what seems to be a smart legislative strategy, President Biden is poised to match F.D.R.’s stunning debut in office.

That doesn’t require Mr. Biden to transform the country before May 1, the end of his first 100 days, the handy if arbitrary marker that Mr. Roosevelt (to the irritation of his successors) laid down in 1933. But for America to “own the future,” as the president promised last month, he needs to do amid the pandemic what Mr. Roosevelt did amid the Depression: restore faith that the long-distrusted federal government can deliver rapid, tangible achievements.

With one of biggest and fastest vaccination campaigns in the world and the signing of a $1.9 trillion dollar Covid relief package, the president has made a good start at that. His larger aim is to change the country by changing the terms of the debate.

Just as Mr. Roosevelt understood that the laissez-faire philosophy of the 1920s wasn’t working anymore to build the nation, Mr. Biden sees that Reagan-era market capitalism cannot alone rebuild it.

The New Deal was just that — a “deal,” a new social contract between the government and the people, with a new definition of what the government owes us when we’re in trouble.

Before Mr. Roosevelt, it was largely up to local communities and the private sector to relieve suffering and expand employment. Mr. Roosevelt shifted the onus of responsibility and didn’t worry about overshooting the target. Like Mr. Biden today, he argued that spending too little is riskier than spending too much. “Better the occasional faults of a government that lives in a spirit of charity,” F.D.R. said in explaining the philosophical shift, “than the consistent omissions of a government frozen in the ice of its own indifference.”

The heart of Mr. Biden’s domestic agenda is the same as Mr. Roosevelt’s: jobs and infrastructure. New Deal programs created more than 20 million jobs and built 39,000 new schools, 2,500 hospitals, 325 airports and tens of thousands of smaller projects that did not end the Depression but eventually helped power the postwar American boom.

Mr. Biden’s New Deal — Build Back Better — aims to upgrade the physical infrastructure that Mr. Roosevelt did so much to create. But it’s also a bold effort to add clauses to Mr. Roosevelt’s social contract that include a “service infrastructure” to boost support for the caring professions — the parts of the American economy that cannot be automated or outsourced overseas.

Of all the bills enacted in Mr. Roosevelt’s first 100 days, the one closest to his heart was the Civilian Conservation Corps, which by the summer of 1933 employed 275,000 young men clearing trails, building parks, and restoring the soil. The C.C.C. — “Roosevelt’s Tree Army” — went on to employ close to three million young men and plant over three billion trees. Now Mr. Biden aims to revive and update it with a new $10 billion Civilian Climate Corps that would help prepare for worsening heat waves, wildfires and storms and the national service movement that F.D.R. founded.

Like all effective presidents, Mr. Roosevelt knew how to sequence his proposals to build momentum. He split the New Deal into three objectives: “Relief,” “Recovery” and “Reform.” President Biden, who has stressed the importance of “timing,” is essentially doing the same.

“Relief” — through the mammoth American Rescue Plan — has already arrived. In fact, in constant 1933 dollars, the president has provided more relief in his first hundred days than Mr. Roosevelt did in his, though F.D.R. achieved structural changes (especially in the financial system) that Mr. Biden has not attempted yet.

“Recovery” will be broken into separate plans. The $2 trillion American Jobs Plan wouldn’t directly employ people — as Mr. Roosevelt did with his programs like the Works Progress Administration; it would instead use government contractors to invest in not just roads and bridges but water pipes and rural broadband (the equivalent to Mr. Roosevelt’s 1936 Rural Electrification Act bringing electricity to the countryside). We’ll see if cleverly placing many of those projects in red states is enough to win the 10 Republican votes in the Senate necessary to avoid a filibuster. Even small-government conservatives don’t like voting against the economic interests of their constituents.

Another more controversial element of Build Back Better — The American Families Plan, focused on human capital — would fund massive investments in education, health care and child care. These and other projects would be paid for, at least in part, with tax increases on those making more than $400,000 a year — far smaller tax hikes, by the way, than Mr. Roosevelt’s.