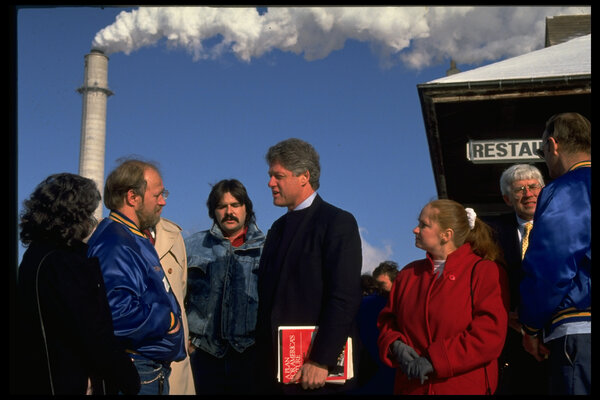 My colleague Ezra Klein wrote his latest column on the work of David Shor, a Democratic polling analyst whose primary message is a critique of the Democratic Party, namely that its college-educated professional class is too removed from the working-class, non-college-educated voters they need to win. Here’s Ezra with a little more detail:

The Democratic Party was trapped in an echo chamber of Twitter activists and woke staff members. It had lost touch with the working-class voters of all races that it needs to win elections, and even progressive institutions dedicated to data analysis were refusing to face the hard facts of public opinion and electoral geography.

The main issue, Shor argues, is the polarization of voters by education. Voters who graduated college have moved sharply toward Democrats, and voters who have not have moved sharply toward Republicans. The problem for Democrats is that most voters don’t attend college. The single largest cohort of voters, in fact, are white people without a college degree. And it is those voters who have flocked in droves to the Republican Party since the 2016 presidential election.

If those voters were concentrated in a few states, this would not be such an advantage. But they are everywhere, including most swing states.

Donald Trump’s Republican Party may not be able to win raw majorities in national elections, but its grip on non-college whites (as well as its inroads with non-college Black and Hispanic voters, especially men) means it can easily win power in a system where the geography of your votes is just as important as the number of votes you win. The Senate, in particular, will almost certainly return to and stay in Republican hands, and there’s no guarantee that Democrats will ever muster the votes to win it back. Here’s Ezra, channeling Shor:

To push back on education polarization, Shor believes that Democrats should talk less about issues of racial justice and immigration — which, he argues, have pushed non-college voters, especially whites, away from the Democratic Party — and align their message with the economic priorities of the non-college majority. Again, here’s Ezra:

Now, for all of these proscriptions, Shor does not say much about what this would actually look like and how it is distinct from current practice. When he does, he usually cites two examples, one positive, one negative. The positive example is Barack Obama’s 2012 campaign for re-election, in which Obama downplayed issues of race and immigration and focused on economic growth and the record of his opponent, Mitt Romney, who had made his fortune in private equity. The negative example is the 2016 presidential election, when Hillary Clinton tried to counter Donald Trump’s racist messaging with her own rhetoric of inclusion, a move that kept race and immigration salient and pushed non-college whites further into the Republican column.

Shor sees the 2020 presidential election, and Trump’s significant gains with Hispanic voters, as another example of what happens when race and racial issues dominate a campaign and its media environment:

“In the summer, following the emergence of ‘defund the police’ as a nationally salient issue, support for Biden among Hispanic voters declined,” Shor said in a March interview with New York magazine. “So I think you can tell this microstory: We raised the salience of an ideologically charged issue that millions of nonwhite voters disagreed with us on. And then, as a result, these conservative Hispanic voters who’d been voting for us despite their ideological inclinations started voting more like conservative whites.”

Here, I should say, I don’t think this analysis is necessarily wrong. Indeed, there is other evidence to prove the point.

In a piece for the University of Virginia’s Center for Politics (where I am a fellow), the political scientist Alan Abramowitz shows how the “deep political divide between college and non-college white voters in recent elections reflects a deep ideological divide between these two groups.” This class divide, he continues, “appears to have little or nothing to do with economic self-interest and everything to do with the diverging racial attitudes of these two groups.” Racial resentment and party identification, he finds, are by far the strongest predictors of conservative ideology.

Likewise, in his Substack newsletter, the demographer Ruy Teixeira unpacks new survey data from the 2020 election to find that “Hispanics opposed defunding the police, decreasing the size of police forces and the scope of their work, and reparations for the descendants of slaves by 2:1 or more.” What’s more, a majority of Hispanic voters hold what political scientists call “racially conservative” views. Specifically, Teixeira writes,

These voters agreed, by 9 points, that racial minorities have mostly fair opportunities to advance in America, by 11 points agreed that America is a fair society where everyone has a chance to get ahead and by 20 points agreed that “Irish, Italian, Jewish, and many other minorities overcame prejudice and worked their way up. Blacks should do the same without any special favors.”

Take all of this together and you have a pretty clear picture. Democrats’ perceived identification with immigration, racial liberalism and the interests of Black activists has alienated a large cohort of non-college white and Hispanic voters, as well as a smaller (but still meaningful) number of non-college Black voters.

Now is the point where I should show my cards. My problem isn’t this conclusion. If you think, as I do, that anti-Black prejudice plays a large and important part in American politics, then none of this comes as a surprise.

My problem is that I don’t think Shor or his allies are being forthright about what it would actually take to stem the tide and reverse the trend. If anti-Black prejudice is as strong as this analysis implies, then it seems ludicrous to say that Democrats can solve their problem with a simple shift in rhetoric toward their most popular agenda items. The countermessage is easy enough to imagine — some version of “Democrats are not actually going to help you, they are going to help them.”

What might move the needle is what worked for a previous generation of Democrats who fought to align their party with the white mainstream. In the early 1990s, the historian Thomas Sugrue writes in “Not Even Past: Barack Obama and the Burden of Race,” liberal journalists in influential periodicals like The New Republic, The Washington Post and The New York Times argued that “the Democratic Party had lost its appeal on the national level because of backlash against the social programs of the 1960s.” Worse, Democrats had capitulated to “identity politics.”

Black power radicals, aided and abetted by white leftists, alienated well-meaning, color-blind, working- and lower-middle-class whites and drove them from the New Deal coalition. The “lesson” from this history was clear: so long as the Democrats were captive to “special interests” (namely, minorities), they would never be a majority party on the presidential level. Democrats, in this view, needed to distance themselves from civil rights activists and flamboyant black political leaders like New York’s Reverend Al Sharpton and the Reverend Jesse Jackson.

The Democrat who broke the party’s presidential losing streak, Bill Clinton, took these recommendations. He spoke about the party’s most popular policies while also taking every opportunity to show that he was not, and would not be, beholden to the interests of Black Americans. Invited to speak at Jesse Jackson’s Rainbow Coalition conference, Clinton concluded his remarks with a now-notorious denunciation of the rapper and activist Sister Souljah, an attack by proxy on Jackson, who had brought Souljah to the event. Jackson, a two-time candidate for the Democratic presidential nomination, was a stand-in for the Black activist class, and Clinton’s audience got the message. “What Clinton got out of the Sister Souljah affair,” noted the historian Kenneth O’Reilly, “were votes, particularly the votes of the so-called Reagan Democrats like the North Philadelphia electrician who said ‘the day he told off that [expletive] Jackson is the day he got [mine].”