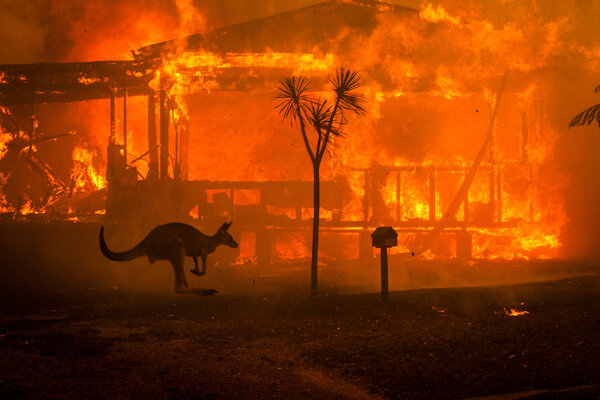 Ms. Badham is an Australian journalist and the author of “QAnon and On: A Short and Shocking History of Internet Conspiracy Cults”

Australia is a land of portent for the many dangers posed by climate change. The fires, storms, heat waves and other catastrophes that climatologists predict for the planet are already routine here. They also loom over national elections on May 21.

Not for the first time. Two of the country’s last three elections hinged in some measure on the climate-versus-jobs debate, with Mother Nature losing out. But recently the political temperature has changed. The rising toll exacted by extreme weather — particularly mega-fires in 2019 and 2020 — is resonating with the public.

That’s bad news for Prime Minister Scott Morrison. Climate inaction helped to propel Mr. Morrison to the leadership of the conservative Liberal-National coalition in 2018, but he’s in a tough fight now. Polls this week showed the opposition Labor Party with 51 percent of votes, to 49 percent for the coalition. If that bears out, Australia may serve not merely as a preview of climate peril, but of the risks faced by politicians who shrug it off.

Ignoring climate concerns wasn’t always a weak point for Mr. Morrison. The coalition government that he now leads was first elected in 2013 in part on a promise to rescind attempts at carbon pricing by the previous Labor government. This policy won support from the mining lobby and voters who were fed fearful rhetoric about environmentalism’s relentless creep on local industry and jobs. It was an effective strategy in a country that is a major exporter of fossil fuels and home of the world’s largest coal port. A belt of parliamentary seats runs through communities where well-paid jobs in mines represent rare and precious economic opportunity and carry enough weight to influence elections.

Mr. Morrison became prime minister in an internal party coup. The moderate policy ambitions of his more liberal colleague and predecessor Malcolm Turnbull, which included action on climate, fatally alienated him from caucus allies to his right, especially those with links to the fossil fuel lobby. Mr. Morrison stared down pro-climate caucus rivals and vaulted into office.

Australians didn’t know much about Mr. Morrison when he contested his first election as prime minister in May 2019. He’d only been in office nine months. But he had provided ample clues, scolding students who protested his government’s climate inaction to leave it to the grown-ups, suggesting electric vehicles posed a threat to fun weekends, and brandishing a lump of coal in Parliament like a beloved pet rock in 2017 when he was treasurer.

Lagging behind Labor for most of that campaign, Mr. Morrison was saved when an ill-conceived convoy of well-funded environmentalists traveled to mining towns already struggling with high unemployment to campaign against a major coal project. Mr. Morrison reframed anti-climate politics as pro-jobs, won the mining towns and held onto power by one seat.

Politically rewarded, he has relentlessly maintained his anti-climate brand, balking at defining a path toward net-zero targets, and embracing coal mines.

But the great fires that swept across Australia soon after Mr. Morrison’s victory changed the country. From July 2019, dry conditions and high heat — local symptoms of climate change — kindled mega-fires across the island continent. Bone-dry pastures, riverbeds and forests offered no resistance.

Landscapes disappeared under red skies, yellow smoke and a stench of ash that clung to everything. At least 60 million acres — about the size of the United Kingdom — were torched, nearly three billion animals perished or were displaced, and 34 people were killed. Smoke pollution was linked to hundreds more deaths. Damage was estimated at $100 billion.