I want to end this week by showing you two Covid-19 charts. They contain the same message: The pandemic is in retreat. 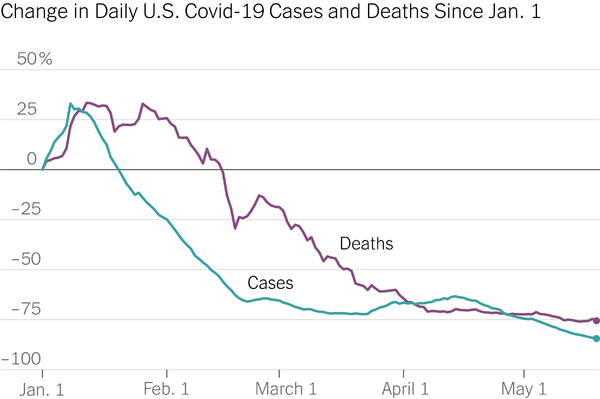 In the United States, there is now an excellent chance that the retreat is permanent. Victory over Covid has not yet arrived, but it is growing close. After almost a year and a half of sickness, death, grieving and isolation, the progress is cause for genuine joy.

More than 60 percent of American adults have received at least one vaccine shot, and the share is growing by about two percentage points per week. Among unvaccinated people, a substantial number have already had Covid and therefore have some natural immunity. “The virus is running out of places to be communicable,” Andy Slavitt, one of President Biden’s top Covid advisers, told me.

The share of Covid tests coming back positive has fallen below 3 percent for the first time since widespread testing began, and the number of hospitalized patients has fallen to the lowest point in 11 months, Dr. Eric Topol of the Scripps Research Translational Institute noted. For the first time since March 5 of last year, San Francisco General Hospital yesterday had no Covid patients — “a truly momentous day,” Dr. Vivek Jain said.

There are still important caveats. Covid remains especially dangerous in communities with low vaccination rates, as Slavitt noted, including much of the Southeast; these communities may suffer through future outbreaks. And about 600 Americans continue to die from the disease every day.

But the sharp decline in cases over the past month virtually guarantees that deaths will fall over the next month. The pandemic appears to be in an exponential-decay phase, as this helpful Times essay by Zoë McLaren explains. “Every case of Covid-19 that is prevented cuts off transmission chains, which prevents many more cases down the line,” she writes.

This isn’t merely a theoretical prediction. In Britain, one of the few countries to have given a shot to a greater share of the population than the U.S., deaths are down more than 99 percent from their peak.

And around the world

Globally, the situation is not as encouraging, but it has improved. Confirmed new cases are down 23 percent from their peak in late April. In India, caseloads have been falling rapidly for almost two weeks.

What’s behind the improvement? Several factors.

New restrictions on behavior appear to have helped in India and some other countries. The rising number of vaccinations also helps; it has exceeded 1.5 billion, which means that more than 10 percent of the world’s population — and maybe closer to 15 percent — has received at least one shot. (A new outlier: Mongolia has secured enough shots to vaccinate all of its adults, thanks to deals with neighboring Russia and China.) Natural immunity, from past infections, may also be slowing the spread in many places, and the virus’s seasonal cycles may play a role, too.

Most countries remain more vulnerable than the U.S. because of their lower vaccination rates. In Africa, a tiny share of people have received a shot, and the numbers are only modestly higher in much of Latin America, the Middle East and Southeast Asia.

The vaccines are how this pandemic ends. That point is coming nearer in the United States and a few other affluent countries, but it remains distant in much of the world. Accelerating the global manufacturing and distribution of vaccines is the only sure way to avoid many more preventable deaths this year. (The Times editorial board, The Economist and National Review have each recently laid out arguments for how to do so.)

More on the virus:

Some Americans are struggling to make sense of — and pay — exorbitant and confusing bills, The Times’s Sarah Kliff reports.

A data idea, from Matthew Springer of the University of California, San Francisco: States should report Covid deaths and hospitalizations by vaccination status to highlight the value of the shots.

Virus resources: Look up the pace of vaccinations in your state.

A cease-fire between Israel and Hamas went into effect after more than 10 days of fighting that killed more than 230 people in Gaza and 12 people in Israel.

Egypt mediated the truce, which aims to end an intensive exchange in which Hamas fired rockets into Israel, and Israel carried out airstrikes on Gaza.

Biden praised the cease-fire and sent his condolences to “all the families, Israeli and Palestinian.”

Biden said the U.S. would work with the Palestinian Authority to provide humanitarian aid to Gaza.

The House narrowly passed a bill to increase Capitol security. No Republicans voted for it.

Biden signed a bill addressing hate crimes against Asian-Americans. “I’m proud today that Democrats and Republicans have stood up together,” he said.

Tennessee barred doctors from giving hormone treatments to transgender minors before puberty. Experts said they knew of no doctors in the state who did so.

The Justice Department under the Trump administration seized phone and email records of a CNN journalist, the network said.

Republican lawmakers in Texas are trying to reframe the state’s history curriculum and play down references to slavery and anti-Mexican discrimination.

North Korea’s stockpile of nuclear weapons and fuel has roughly doubled in the past four years.

The Ethiopian government — fighting a regional war and apparently committing atrocities — is cracking down on press freedom.

The U.S. steel industry is experiencing a comeback.

Alabama is allowing yoga lessons in its public schools, but there’ll be no “namaste.”

One year later: Through music, movies, canceled podcasts and toppled monuments, this is how culture shifted in the year after George Floyd’s murder.

Open wallets: Six American families show how much they spend in a month.

Modern Love: A woman with a prosthetic leg hopes to make the world more empathetic.

A Times classic: Dispatches from a melting Antarctica.

Lives Lived: Paul Van Doren was a founder of Vans, the California sneaker company that became synonymous with skateboarding and grew into a multibillion-dollar business. He died at 90.

The Eurovision Song Contest is essentially the Olympics of singing. “One night, every year, half of Europe watches a few dozen acts — from Italian rock bands, to Serbian girl groups — and judges who’s best,” Alex Marshall, a European culture reporter for The Times, told us. As in sports, fans respond to a victory by acting as if the entire country has won.

The contest also provides insight into what’s happening on the continent. The Dutch entry, Jeangu Macrooy’s “Birth of a New Age,” is an anthem to Black empowerment. In March, organizers disqualified Belarus over lyrics that seemed to endorse a crackdown on antigovernment protests. In 2009, Georgia withdrew over a song about Vladimir Putin.

The Netherlands, which won the contest in 2019, is hosting the event tomorrow in an arena that will allow 3,500 audience members. Many of this year’s contestants qualified for Eurovision last year, though the show was canceled. While they’re getting another chance at performing this year, they’re singing different songs than they had planned in 2020.

The Guardian has a roundup of this year’s entries, including Ukrainian folk-techno and an Azerbaijani ode to a wartime spy. — Claire Moses, a Morning writer

Climbing the world’s tallest mountains without reaching the top and more stories read aloud by the Times journalists who wrote them.

Take the weekly News Quiz and see how you do compared with other Times readers.

The pangrams from yesterday’s Spelling Bee were millionth and monolith. Here is today’s puzzle — or you can play online.

Thanks for spending part of your morning with The Times. See you Monday. — David

“The Daily” is about the war in Afghanistan. “Still Processing” is about the song “Before I Let Go,” and “Sway” features Snap’s chief executive.

Lalena Fisher, Claire Moses, Ian Prasad Philbrick and Sanam Yar contributed to The Morning. You can reach the team at [email protected].