The biggest tax boon for the wealthy has been the sharp fall in the corporate tax rate.

In the 1950s, ’60s and ’70s, many corporations paid about half of their profits to the federal government. The money helped pay for the U.S. military and for investments in roads, bridges, schools, scientific research and more. “A dirty little secret,” Richard Clarida, an economist who’s now the vice chairman of the Federal Reserve, once said, “is that the corporate income tax used to raise a fair amount of revenue.” 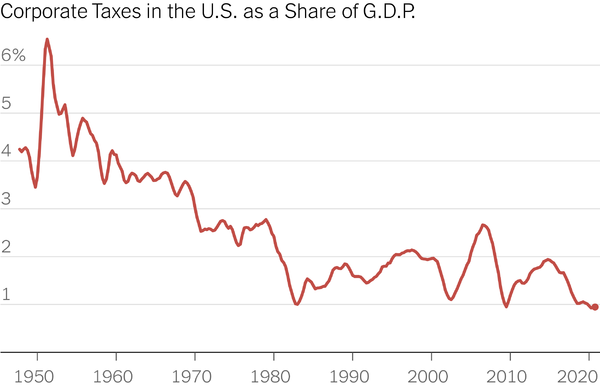 Since the mid-20th century, however, politicians of both political parties have supported cuts in the corporate-tax rate, often under intense lobbying from corporate America. The cuts have been so large — including in President Donald Trump’s 2017 tax overhaul — that at least 55 big companies paid zero federal income taxes last year, according to the Institute on Taxation and Economic Policy. Among them: Archer-Daniels-Midland, Booz Allen Hamilton, FedEx, HP, Interpublic, Nike and Xcel Energy.

“Right now, the U.S. raises less corporate tax revenue as a share of economic output than almost all other advanced economies,” Alan Rappeport and Jim Tankersley of The Times write.

The justification for the tax cuts has often been that the economy as a whole will benefit — that lower corporate taxes would lead to company expansions, more jobs and higher incomes. But it hasn’t worked out that way. Instead, economic growth has been mediocre since the 1970s. And incomes have grown even more slowly than the economy for every group except the wealthy.

The American economy turns out not to function very well when tax rates on the rich are low and inequality is high.

Corporate taxes are such an important part of the overall taxes paid by the wealthy because much of their holdings tend to be stocks. And as the owners of companies, they are effectively paying corporate taxes. Most of their income doesn’t come through a salary or bonus; it comes from the returns on their wealth.

“In effect, the only sizable tax for these billionaires is the corporate tax they pay through their firms,” Gabriel Zucman, an economist and tax specialist at the University of California, Berkeley, told me. “The main reason why the U.S. tax system was so progressive before the 1980s is because of heavy taxes on corporate profits.”

President Biden is now trying to reverse some (but by no means all) of the decline in corporate taxes. His plan would raise the corporate tax rate, punish companies that move profits overseas and introduce a rule meant to prevent companies from paying zero taxes, among other things. The money would help pay for his infrastructure plan. “It’s honest, it’s fair, it’s fiscally responsible, and it pays for what we need,” Biden said at the White House yesterday.

Experts and critics are already raising legitimate questions about his plan, and there will clearly be a debate about it. Biden said he was open to compromises and other ideas.

But one part of the criticism is pretty clearly inconsistent with the facts: The long-term decline in corporate taxes doesn’t seem to have provided much of a benefit for most American families.

For more: If you haven’t yet listened to yesterday’s episode of “The Daily” — in which Jesse Drucker explains how Bristol Myers Squibb has avoided taxes — I recommend it.

European regulators continued to recommend the AstraZeneca vaccine, but said there was a “possible link” with blood clots in a very small number of recipients. Britain said it would aim to offer alternate vaccines to people under 30.

The B.1.1.7 variant, first discovered in Britain, is now the dominant version of the virus in the U.S.

New York will offer one-time payments of up to $15,600 to undocumented immigrants who lost work during the pandemic and could not get unemployment benefits.

Joe Manchin, the West Virginia Democrat, suggested he might not support his party repeatedly using a budget process to pass Senate bills with a simple majority.

The Biden administration said it would restart aid to Palestinians, reversing a Trump-era policy.

Lawyers working to reunite migrant families that the Trump administration separated said they still could not find the parents of 445 children.

Kentucky, which has a Republican legislature and a Democratic governor, has enacted a bill to expand voting rights.

Ten congressional Democrats joined a federal lawsuit that accuses Donald Trump and Rudy Giuliani of conspiring to incite the Jan. 6 riot at the Capitol.

A tiny particle called a muon appears to disobey the laws of physics, challenging scientists’ understanding of the universe.

Tiger Woods was driving about 40 miles per hour over the speed limit when he crashed his car in February, the police said.

An expert with the Los Angeles Police Department testified that Derek Chauvin had used deadly force on George Floyd when no force was warranted. Here are key moments from Day 8 of the trial.

The Islamic State, weakened from its defeat in Iraq and Syria, has found footholds in Africa and claimed responsibility for several recent attacks.

Five people were fatally shot in South Carolina, including a doctor and two of his grandchildren.

After years of resistance, France is having its own #MeToo moment as artists, journalists and others face public accusations of sexual abuse.

Into the Wild: The pandemic has inspired Americans to venture off the beaten path. Search-and-rescue teams have been busy.

Lives Lived: Beginning in the late 1950s, Lois Kirschenbaum was a nightly staple at the New York opera, where her constant desire to get backstage helped her befriend some of the industry’s biggest stars. She died at 88.

“Love is a slippery and intangible thing,” the novelist Celeste Ng writes in an essay for The Times.

It’s captured in moments both striking and ordinary: parents driving an hour and a half to visit children and replenish their fridge; a young couple riding a motorbike at night; a sleeping child surrounded by toy dinosaurs.

In the wake of swelling anti-Asian violence and harassment in the U.S., nearly 30 Asian and Asian-American photographers shared what love looks like in their lives.

The photos come from Oregon, Hawaii, Georgia, Taiwan, Japan and beyond. There are glimpses of food, texts and emails from friends, loved ones dozing off — the “small, everyday, mundane things that add up to what I’ve come to understand as love,” as An Rong Xu, a photographer, writes.

Take some time with the photo essay here.

Make friends with fungi, both the kind you plant and those that seem to pop up on their own.

“First Person Singular,” Haruki Murakami’s new story collection, allows the author’s “own voice — or what sounds like his own voice, wonderfully translated by Philip Gabriel — to enter the narratives,” David Means writes in a review.

The pangram from yesterday’s Spelling Bee was polygamy. Here is today’s puzzle — or you can play online.

P.S. New York City changed the name of Longacre Square to Times Square, in honor of The New York Times’s move to the area, 117 years ago today. A Times story immodestly — but correctly — predicted that the new name was “not likely to be forgotten.”

Today’s episode of “The Daily” is about the Chauvin trial. On “Sway,” Diana Trujillo discusses the future of space travel.

Lalena Fisher, Ian Prasad Philbrick, Tom Wright-Piersanti and Sanam Yar contributed to The Morning. You can reach the team at [email protected].