Power Play is a weekly column that looks at various facets of US-China rivalry and its implications for Asia.

At the recent Group of Seven (G-7) meeting in England, US President Joe Biden threw down a challenge to China’s Belt and Road Initiative (BRI) with the Build Back Better World (B3W) partnership.

While the G-7 is still in the midst of formulating proposals under the B3W, the initiative has been billed as a “values-driven, high-standard and transparent” infrastructure financing plan to challenge China’s BRI.

Mr Biden was clear on the B3W’s intent, telling reporters shortly after the G-7 signed on, that “China has this Belt and Road Initiative, and we think that there’s a much more equitable way to provide for the needs of countries around the world”.

As Mr Biden’s multilateralist approach to confronting China takes shape, this latest salvo from the United States and its G-7 partners has made infrastructure financing the latest battlefront, with America and other developed democratic nations on one side and China on the other.

B3W’s name is derived from Mr Biden’s domestic programme but its mission is global.

By the White House’s estimates, the developing world needs US$40 trillion (S$54 trillion) in infrastructure funding by 2035 – and with the BRI already entrenched in all five continents, the question being asked now is whether the B3W will be able to make a dent to China’s influence and offer infrastructure-starved developing nations an alternative.

Conceived by Chinese President Xi Jinping in 2013, the BRI is the Chinese leader’s signature foreign policy.

Its initial aim was to link China to the rest of the world through a network of ports, roads, railways and trading hubs that roughly mirrored ancient trade routes.

But the concept has since expanded to include other areas, including telecommunications and digital infrastructure (what China calls the Digital Silk Road) and medical cooperation and aid (the Health Silk Road).

As the Covid-19 pandemic continues to ravage the world, China has tapped the BRI for medical and vaccine diplomacy, sending medical supplies and vaccines to BRI countries under the Health Silk Road.

Criticisms of the BRI are well-known: There are suspicions over China’s geopolitical intentions, and accusations that it funds polluting projects and saddles poor countries with loans to make them pliant to China.

Still, it is undeniable that the country’s influence has grown along with the BRI’s footprint – it spans over 138 countries, and Beijing has doled out hundreds of billions of dollars in loans to finance projects in these countries.

In March, the US think-tank, Council for Foreign Relations, pointed out the looming threat from the BRI in a 176-page report, saying it “poses a significant challenge to US economic, political, climate change, security and global health interests”.

The National University of Singapore’s East Asian Institute (EAI) senior research fellow Yu Hong said: “By proposing the B3W, Washington is indicating that it can no longer ignore the global and regional impact of the BRI. It is a platform for China’s rising influence.”

Indeed, South-east Asia could become a key battleground for both the B3W and the BRI.

For one thing, the rapidly developing region has massive infrastructure needs.

The Asian Development Bank estimates that Asean nations would require between US$2.8 trillion and US$ 3.1 trillion in infrastructure spending from 2016 to 2030. 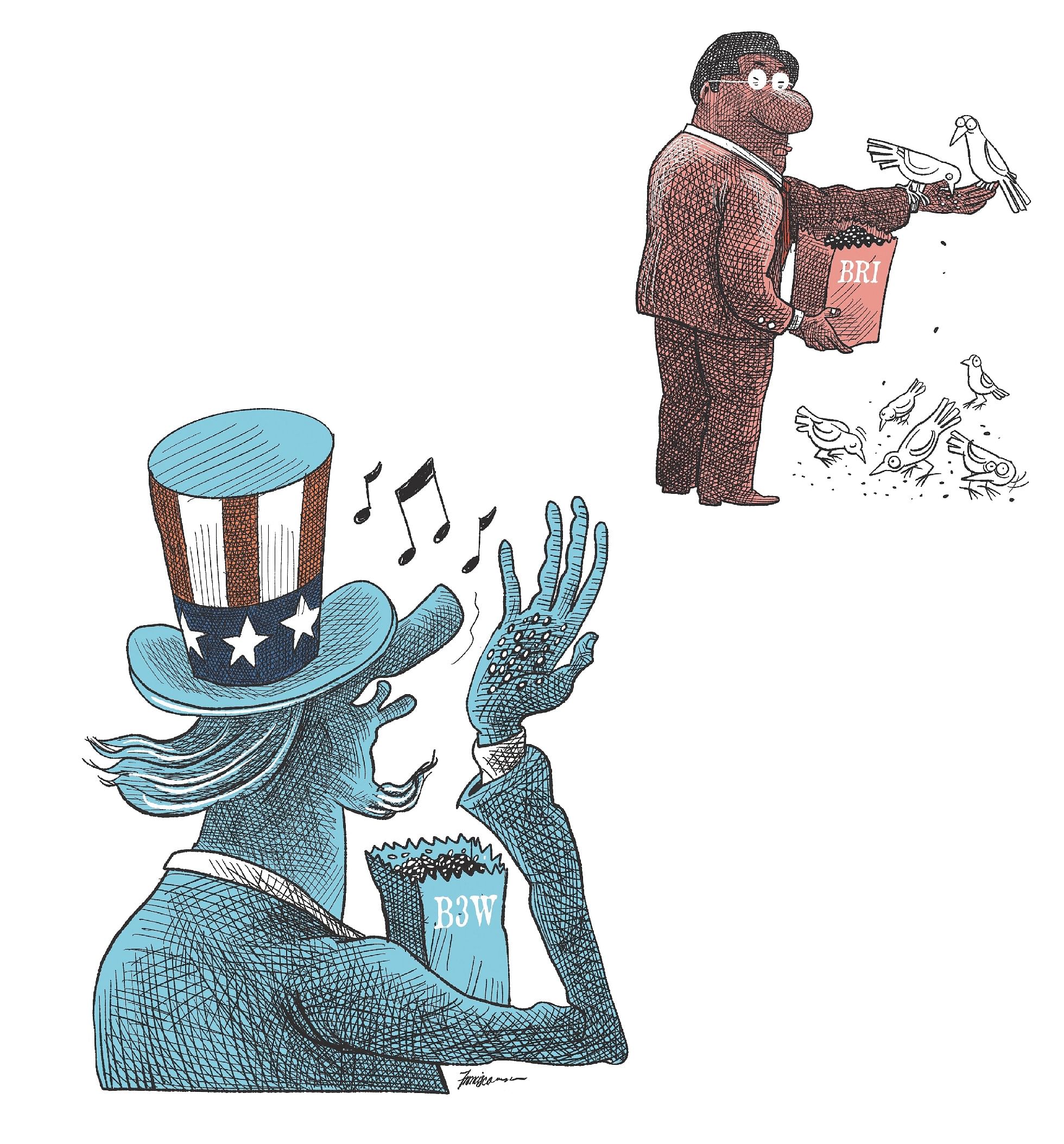 Currently, two of the top infrastructure financiers in South-east Asia are Japan and China.

According to a 2019 report by Fitch Solutions, Japan-supported infrastructure projects in the region were valued at US$367 billion, while China’s were worth US$255 billion.

China’s BRI investments into the region, however, have been growing steadily, from US$16.69 billion in 2014 to US$25.8 billion in 2019 before the pandemic, according to figures from the American Enterprise Institute, which tracks global investments by China.

And despite BRI investments falling sharply last year to US$16.67 billion during the pandemic, South-east Asia became the initiative’s largest investment destination, accounting for 36 per cent of total investment.

To the Chinese, South-east Asia, with its location on China’s periphery, is a priority region, and the BRI’s investments there are expected to grow further, said Dr Kaho Yu, principal analyst for research firm Verisk Maplecroft.

This is also partly because of the Covid-19 pandemic, which has soured views of China in the West.

“A lot of Chinese investment is being directed to other regions, including South-east Asia,” added Dr Yu.

But that is not to say that the BRI has had it smooth in the region. Its missteps have caused countries to view its intentions with wariness, which could give the B3W room to make inroads.

Take, for instance, the East Coast Rail Link (ECRL), which links ports on the east and west coasts of Peninsular Malaysia. The US$16 billion project was put on ice by the last Mahathir Mohamad-led government over high costs and corruption, and was restarted only after Beijing agreed to shave off a third of the cost.

In Laos, the US$5.9 billion China-Laos Railway project has led to the South-east Asian country’s national debt ballooning and made China its largest sovereign creditor, following a loan from the Export-Import Bank of China, which covers 80 per cent of the project cost.

But it is also worth examining how the BRI has carved out a niche for itself in the region.

Assistant Professor Alvin Camba from the Korbel School of International Studies at the University of Denver, who has researched Chinese BRI projects in the Philippines, said Beijing’s approach of not interfering in the political goals or interests of local politicians has, in instances, resulted in these leaders choosing to work with China over other lenders.

Citing the Kaliwa Dam and the Chico River Pump Irrigation Project, he said Philippine President Rodrigo Duterte had chosen to work with China over Japan because the Chinese were open to expediting these projects so they would be completed during Mr Duterte’s current term, which ends next year.

Other lenders, such as the Japanese, the World Bank or the Asian Development Bank, have more stringent social or environmental standards or safeguards against corruption that would “potentially intrude” on the goals of political leaders, said Prof Camba.

“If you’re a political leader and you want to maximise your political influence and use the project for your own good, then you’d get money from the Chinese,” he said.

S. Rajaratnam School of International Studies senior fellow Raffaello Pantucci noted that the BRI was more open to supporting projects that other international lenders would not see as “sustainable or viable”.

“Feasibility studies or viability studies came later, if they came at all,” he said. But this has also come back to haunt the Chinese, after projects came to be seen as “white elephants”.

However, there are signs that Beijing is modifying its approach.

EAI’s Dr Yu said that Beijing has, for instance, shown flexibility in renegotiating costs for certain projects, pointing to the restructuring of costs for the ECRL in Malaysia as an example.

Last year, Beijing also joined the Group of 20 in suspending debt repayment for 77 developing countries amid economic pressures from the pandemic.

“These are clearly in response to some of the regional and international scepticism and criticism of the BRI,” said Dr Yu.

If Beijing’s goal is to expand its influence, then it knows it must address these criticisms; if not, they will begin to chip away at China’s international credibility.

But the B3W also faces challenges of its own. Its details have yet to be worked out – funding sources remain vague, and so are the types of loans and projects that will be funded. Pulling together its various members – some of which, like Japan and Germany, already have their own bilateral infrastructure financing initiatives – will also need a lot of work.

But the biggest challenge the B3W will face is whether it will be able to endure beyond Mr Biden’s term in office.

The White House has said that the B3W will focus on projects in the areas of “climate, health and health security, digital technology, and gender equity and equality” – hardly a surprise, considering these are the Biden administration’s policy priorities.

But if the B3W intends to pose a meaningful challenge to China’s BRI, then it must outlive and go beyond the term of the current administration.

If it can do so, it will mean a new option for financing high-quality infrastructure. That would be good news for developing nations not just in South-east Asia, but also the rest of the world.