Good morning. Why has Covid’s toll been surprisingly low across much of Africa and Asia?

It’s one of the biggest mysteries about Covid-19: Why has the death toll been relatively low across much of Africa and Asia?

The virus has killed a fraction of as many people on those continents — despite their relative lack of resources — as it has in Europe or the U.S.: 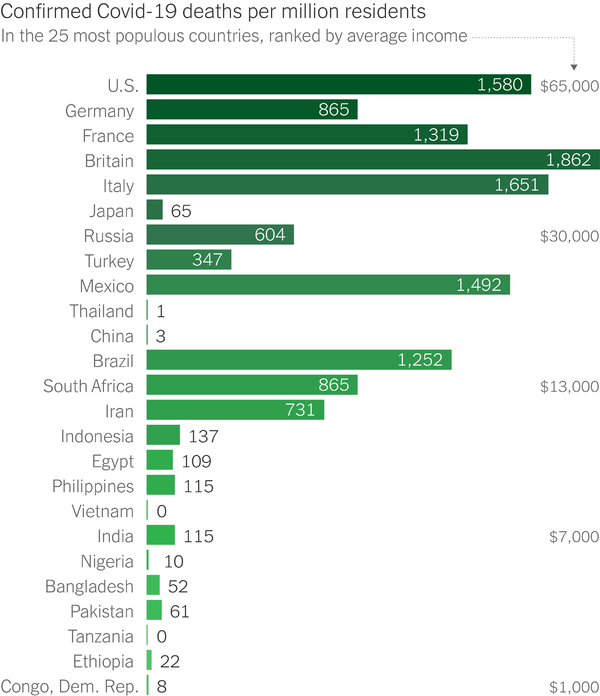 This isn’t how public health emergencies usually work. They tend to inflict their worst damage in poorer places, which is indeed what’s happening within the U.S., where the toll has been higher in many minority and low-income communities.

Globally, though, Covid has been different. In a recent New Yorker article, the physician and Pulitzer Prize-winning author Siddhartha Mukherjee described it as “an epidemiological whodunit.”

Other than in Mukherjee’s article, the pattern has received surprisingly little attention in the U.S. It’s one of those instances when good news is being overlooked. I want to devote today’s newsletter to the mystery and its most plausible explanations.

Is it a statistical mirage?

Almost certainly not. Some portion of the pattern probably does stem from an underreporting of deaths by less developed medical systems. But much of the pattern is real, many epidemiologists believe.

In India, for example, major cities keep statistics on overall mortality — regardless of cause — and it has risen less than it has in many richer countries. The data suggest that both Delhi and Mumbai have “a much lower Covid death rate than in the U.S.,” Dr. Prabhat Jha, who runs the Center for Global Health Research at St. Michael’s Hospital in Toronto, told me.

In Mukherjee’s article, he described a temporary hospital that local officials in Mumbai set up last year in Dharavi, a sprawling slum there. They closed it after Dharavi suffered far fewer deaths than expected.

Covid is usually harder on older people: More than 80 percent of U.S. deaths have occurred among people who are 65 or older.

Across Africa and much of Asia, the population is younger. Birthrates are higher, and other health problems more frequently kill people before they reach old age. In sub-Saharan Africa, only 3 percent of the population is 65 or older. In Pakistan, only 4 percent is. In the U.S., the share is 16 percent, and it’s 20 percent in the European Union.

A related factor may be the fact that nursing homes — where Covid has often spread from one resident to the next — are more common in Western countries. Outside the West, older people often live in multigenerational households.

Still, age does not seem to be the full answer. Statistical models that include age still find unexpectedly low death counts in many poor countries.

There’s a lesson here for Americans: Schools, stores and workplaces can reduce the spread of Covid by improving their ventilation.

Immunity may not be uniform

Many researchers suspect that this is an important part of the answer. If previous coronaviruses spread more widely in some countries, people’s immune systems there may be better prepared to fight Covid. “There is a lot of circumstantial evidence,” Salim Abdool Karim, a South African epidemiologist, told Reuters, “but there is no smoking gun.”

Similarly, a team of Indian researchers have argued that deaths “are lower in countries which have a higher population exposed to a diverse range of microbes,” as the BBC’s Soutik Biswas wrote. The large share of asymptomatic infections in India is consistent with this hypothesis, Dr. Gagandeep Kang, a virologist in the southern city of Vellore, told The Financial Times.

If the hypothesis is correct, it could help explain why deaths are lower in Africa and Asia than in much of Latin America.

“Africa is doing a lot of things right the rest of the world isn’t,” said Gayle Smith, a former Obama administration official.

Again, though, this seems unlikely to be the main explanation for the relatively low Covid death toll. Several Asian and African countries, including India, have had much more scattered policy responses — as the U.S. and Europe have had.

The full answer to this mystery surely involves multiple explanations. Whatever they are, it’s one of the few ways in which Covid has not been as bad as many had feared. Hundreds of thousands of people across Africa and Asia have still died of this terrible disease. But many others are alive today for reasons that are both unclear and marvelous.

The number of new cases fell in the U.S. yesterday for the ninth straight day, according to The Times’s seven-day moving average.

Gov. Mike DeWine of Ohio, a Republican, defended keeping his state’s mask mandate: “We know that this makes a huge, huge difference.”

The pandemic has worsened factors that lead to child marriage.

Israel is reopening indoor dining to people over 16 who are fully vaccinated.

Planes, sleds and snowmobiles: how Alaska became the state with the highest rate of fully vaccinated residents.

Senator Joe Manchin, the West Virginia Democrat who has supported the filibuster, suggested he was open to altering it.

The White House is preparing to retaliate against Russia for the hacking of U.S. government agencies that officials discovered late last year.

The Times spoke to more than 50 people close to Senator Josh Hawley of Missouri about his rise and Trump-era turn.

Here’s what’s in President Biden’s stimulus bill, which is scheduled to go before the House for final approval tomorrow.

The leader of the New York State Senate, a Democrat, called for Gov. Andrew Cuomo’s resignation. The Washington Post and The Wall Street Journal have published more allegations that he mistreated former aides. “There is no way I resign,” Cuomo said.

Meghan, the Duchess of Sussex, told Oprah Winfrey that life as a royal made her suicidal. (Here are takeaways and analysis from last night’s interview.)

The Media Equation: They had a fun pandemic, and you can read about it in print.

Lives Lived: He was the hockey dad who taught his son to “skate to where the puck’s going and not to where it’s been.” And when an aneurysm robbed him of his memories, he rebuilt his life with family and friends. Walter Gretzky died at 82.

Last month, Apple TV+ released “Billie Eilish: The World’s a Little Blurry,” a documentary depicting the singer’s rise and the creation of her Grammy-winning debut album. It follows other recent documentaries about pop stars including Justin Bieber, Beyoncé and the girl group Blackpink.

The artists or their labels helped produce all of these films, which promise an unvarnished glimpse into the lives of the performers. That’s not quite what they deliver.

Celebrities have long used documentaries to manage their images, even when the production team is technically independent. Music labels are often involved in the documentaries, in part because “directors have little choice: films about musicians need music, and licensing can be prohibitively expensive,” Danny Funt writes in the Columbia Journalism Review.

Perhaps the best way to approach celebrity documentaries is to enjoy them for what they are: carefully constructed entertainment. In Eilish’s case, the documentary often feels “almost observational, like a nature film,” The Times critic Jon Caramanica writes in a review. Still, he says, “there is never anything other than a sense of safety in this footage.”

As Simran Hans writes in The Guardian, “Artists continue to utilize the documentary form as a shorthand for truth — but that truth is still another construction.”

Touring shows that transform spaces into a Vincent van Gogh dream world are popping up around the U.S.

Here are five workouts that take less than 10 minutes.

The pangram from Friday’s Spelling Bee was matriarch. Here is today’s puzzle — or you can play online.

P.S. The civil rights march in Selma, Ala., known as Bloody Sunday took place 56 years ago yesterday. The Times covered it on the front page.

Today’s episode of “The Daily” is about Biden and immigration. On the Book Review podcast, Radhika Jones discusses Kazuo Ishiguro’s latest novel.