Good morning. And Merry Christmas. We have something different for you today. 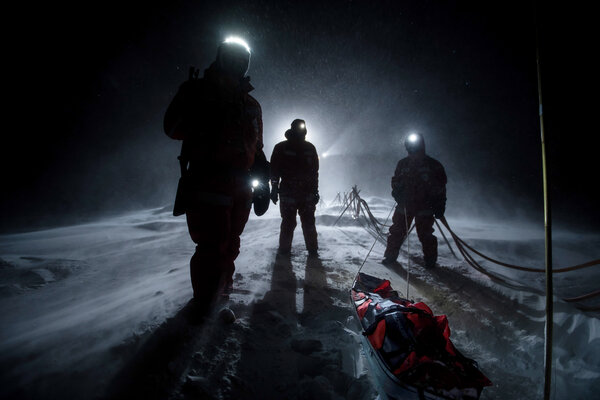 Every December, media organizations publish lists of the year’s “most read” stories (and you’ll see The Times’s list in a newsletter next week). But today — on Christmas — we’re going to do something different.

In 2020, three enormous stories — a pandemic, an election and a racial-justice movement — dominated the news. They were so big that they overshadowed many other subjects. So I asked top editors from across The Times to tell me their favorite overlooked articles that they published this year.

Overlooked is a subjective idea, of course, and maybe you have already read some of these. But I’m confident that many of you haven’t. They are a deeply human mix, filled with discovery, joy and pain. Some touch on the year’s big themes and others are entirely distinct.

1. Here lies the skull of Pliny the Elder, maybe.

2. The aging of dogs may provide useful clues for people.

4. A self-published cookbook about pickles has become a cult classic in India.

5. The people waiting in line at Trader Joe’s were yelling into their phones. The neighbors fought back.

6. The rural roads of Wisconsin are falling apart.

7. Housekeepers, ghosted by their employers, coped with a “a full-blown humanitarian crisis.”

8. A father and son spent years working at a factory that made them sick. They have coped with the suffering together.

9. A quiz: Could you manage as a poor American?

10. Japan’s skateboarders, frequently shunned, hope that success at the Summer Olympics (now pushed back to 2021) may lead to acceptance.

11. In the last few years, female runners have gotten a lot faster.

14. He took a bullet in New Zealand to save his son: a story of stubborn love battling a trauma that won’t let go.

15. She was denied access to a telescope because of her sex, but she forged ahead and made pathbreaking discoveries about the cosmos. E. Margaret Burbidge died at 100.

19. As a senator, Joe Biden spoke of transforming China through trade. He doesn’t anymore.

20. The military’s leadership is overwhelmingly white. Still, Lloyd Austin rose to the top.

21. The N.A.A.C.P. is trying to end manipulation by the energy industry.

23. Life on an icebreaker: constant darkness and minus 50 degrees Celsius.

24. Tad Jones, who lived in a forest for decades, faced an existential battle with a wildfire in Last Chance, Calif.

25. Black actors, authors and other creators talked about the art that inspires them.

A programming note: I’ll be off next week. My colleagues will be filling in, and The Morning will appear in your inbox each weekday. I’ll you see in 2021. — David

House Republicans blocked a Democratic effort to pass a bill to send Americans $2,000 one-time stimulus checks — an amount President Trump has called for. Some Republicans are urging Trump instead to sign the stimulus bill that Congress passed with big bipartisan majorities earlier this week; it would send $600 checks to many individuals.

Economic benefits like unemployment payments will begin to lapse if Trump does not sign the stimulus bill.

If Trump vetoes the bill, Congress could potentially override the veto. If he does nothing — known as a pocket veto — Trump may leave Congress powerless to respond before the current session ends.

Mexico began a mass vaccination campaign, the first Latin American country to do so.

Federal officials said the U.S. had vaccinated fewer people than they had hoped by this point, but they said it was still likely that 100 million Americans would be vaccinated by March.

More than one million people have received a dose of a virus vaccine in the U.S. This map breaks it down by state.

As of Monday, the U.S. will require all airline passengers arriving from Britain to have a negative virus test that is less than 72 hours old.

More than one million people passed through U.S. airports on Wednesday, the highest number since March. Pre-Christmas travel is still down by about 60 percent compared with last year.

Britain and the European Union struck a post-Brexit trade deal that averts costly tariffs on British goods while ending the free movement of people between Britain and the E.U. (You can find more takeaways here.)

The agreement also covers many mundane but crucial matters, including visas, health insurance and travel. It’s a pretty good deal for the E.U., The Times’s Steven Erlanger writes.

A Pandemic Christmas: Every year, Bethlehem attracts pilgrims, tourists and dignitaries, but the pandemic has left the West Bank town devoid of visitors, with hotels struggling and I.C.U. beds full.

Modern Love: A son gets to spend Christmas with his father, who was released from jail just in time.

Lives Lived: Xin Xing, the star of Chongqing Zoo in China, was the world’s oldest panda in captivity. She had more than 150 descendants in several countries. She died at 38, the equivalent of at least 110 in human years.

This holiday season, consider journalism that helps your friends and family understand what’s happening in the world and how to navigate it. Give a Times subscription today.

Be your own Steve Kornacki

Steve Kornacki, the MSNBC correspondent who became a cultural sensation breaking down election returns on air this year, has a new part-time gig. He has been appearing on NBC’s Sunday night football broadcast to explain the N.F.L.’s always-complex playoff scenarios.

Kornacki is a football fan, and appearing on the broadcast was “one of those pinch-yourself moments,” he told USA Today.

You can have access to the same kind of computer algorithm that Kornacki uses on the air. The Times has created an interactive that tells you every team’s chances of making the playoffs — and lets you watch them change as you select the results of future games. For football fans, it’s addictive.

You can see how today’s Christmas Day game between the Minnesota Vikings and New Orleans Saints will affect each team’s positioning. Or look at the fading Pittsburgh Steelers or upstart Arizona Cardinals. And if you’re a fan of the hapless New York Jets or Jacksonville Jaguars, you can follow their race for the league’s worst record — and the No. 1 draft pick that comes with it.

These buttermilk-brown sugar waffles are a perfect morning treat.

Pixar’s latest film, “Soul,” is a story about jazz, death, ambition and art that veers into the metaphysical. The review is here.

Despite empty stands, there were many sports moments that stood out to Times reporters.

Many of our wardrobes changed this year. Here are the ups and downs of fashion in 2020.

The pangram from yesterday’s Spelling Bee was chutney. Today’s puzzle is above — or you can play online if you have a Games subscription.

Here’s today’s Mini Crossword, and a clue: One of Santa’s reindeer (five letters).

Thanks for spending part of your morning with The Times. — David

P.S. The Neediest Cases Fund dates back to a walk that Adolph S. Ochs, then the publisher of The New York Times, took on Christmas Day in 1911. Read about some of the fund’s efforts to address the pandemic here.

There is no new episode of “The Daily” today. The latest Modern Love podcast examines why relationships need some sound and fury.

Claire Moses, Ian Prasad Philbrick and Sanam Yar contributed to The Morning. You can reach the team at [email protected].